Fresh Resources for Web Developers – November 2014. As web developers, it’s important for us to stay in touch with what’s going on in terms of new technology and the new programs available. 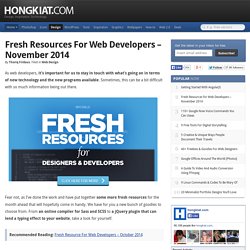 Sometimes, this can be a bit difficult with so much information being out there. Fear not, as I’ve done the work and have put together some more fresh resources for the month ahead that will hopefully come in handy. Writers Workshop Classroom Poster How to Write a Good Essay Poster. Basic Geometric Constructions. The 21 Best Resources for 2014 to Prevent Cyberbullying. According to the Cyberbullying Research Center, more than half of teens and adolescents have reported that they’ve been bullied online, and between 10 and 20 percent say it occurs regularly. 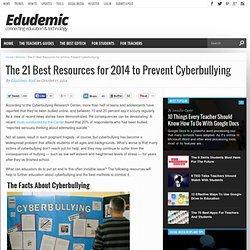 As a slew of recent news stories have demonstrated, the consequences can be devastating. A recent study conducted by the Center found that 20% of respondents who had been bullied, “reported seriously thinking about attempting suicide.” New Video: Instructional Objectives Explained. New Digital Literacy Program Educates K-12 Students on Internet Safety. The free curriculum is designed to facilitate conversations between teachers and students about digital citizenship in the 21st century. 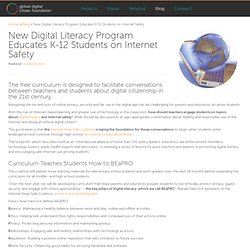 Navigating the ins and outs of online privacy, security and fair use in the digital age can be challenging for parents and educators, let alone students. With the rise of Internet-based learning and greater use of technology in the classroom, how should teachers engage students on topics about digital literacy and Internet safety? What should be discussed in an age-appropriate conversation about healthy and responsible use of the Internet and being an ethical digital citizen? The good news is that the Internet Keep Safe Coalition is laying the foundation for those conversations to begin when students enter kindergarten and continue through high school, according to Education Week. Science Graphic of the Week: Super-Detailed Interactive 3-D Seafloor Map. This super-detailed map of the ocean floor’s topography is based on satellite measurements of subtle lumps on the ocean’s surface. 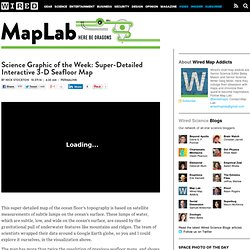 These lumps of water, which are subtle, low, and wide on the ocean’s surface, are caused by the gravitational pull of underwater features like mountains and ridges. The team of scientists wrapped their data around a Google Earth globe, so you and I could explore it ourselves, in the visualization above. 22 maps and charts that will surprise you. A good visualization helps you see what the data is telling you. 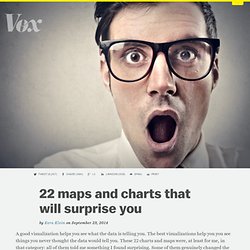 The best visualizations help you you see things you never thought the data would tell you. These 22 charts and maps were, at least for me, in that category: all of them told me something I found surprising. Some of them genuinely changed the way I think about the world. Fresh Resource for Web Developers – October 2014. Being a Web Developer is a really exciting thing. 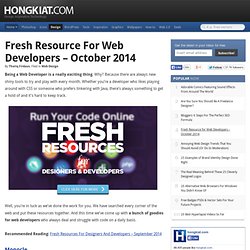 Why? Because there are always new shiny tools to try and play with every month. Whether you’re a developer who likes playing around with CSS or someone who prefers tinkering with Java, there’s always something to get a hold of and it’s hard to keep track. Well, you’re in luck as we’ve done the work for you. Resources on Engaging Student Voices. Infographic: Social Media Networking Site Cheat Sheet. 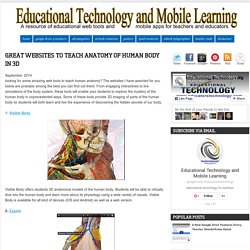 The websites I have assorted for you below are probably among the best you can find out there. From engaging interactives to live simulations of the body system, these tools will enable your students to explore the mystery of the human body in unprecedented ways. An Infographic Guide to Google Apps for the iPad. Digital Citizenship: It’s More Than a Poster! Let me begin with a huge disclaimer.. 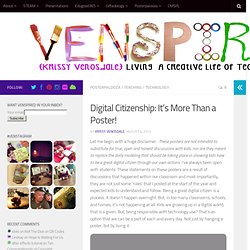 These posters are not intended to substitute for true, open and honest discussions with kids, nor are they meant to replace the daily modeling that should be taking place in showing kids how to be a great digital citizen through our own actions. Daily News Story. Teachers Handbook on Creative Commons and Copyright. Folger's Shakespeare Library Releases 80,000 Images of Literary Art Into the Public Domain. Has a writer ever inspired as many adaptations and references as William Shakespeare? 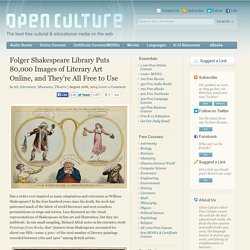 In the four hundred years since his death, his work has patterned much of the fabric of world literature and seen countless permutations on stage and screen. Less discussed are the visual representations of Shakespeare in fine art and illustration, but they are multitude. In one small sampling, Richard Altick notes in his extensive study Paintings from Books, that “pictures from Shakespeare accounted for about one fifth—some 2,300—of the total number of literary paintings recorded between 1760 and 1900” among British artists. In the period Altick documents, a rapidly rising middle class drove a market for literary artworks, which were, “in effect, extensions of the books themselves: they were detached forms of book illustration, in which were constantly assimilated the literary and artistic tastes of the time.”

Essay Map-A Handy Interactive Graphic Organizer to Help Students with Essay Writing. August 18, 2014 Essay Map is one of my favourite web tools that I have been repeatedly recommending for teachers. 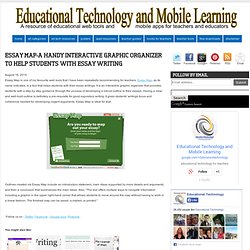 Essay Map, as its name indicates, is a tool that helps students with their essay writings. It is an interactive graphic organizer that provides students with a step by step guidance through the process of developing a robust outline to their essays. Having a clear and well-built outline is definitely a pre-requisite for good expository writing. It gives students' writings focus and coherence needed for developing cogent arguments. Common Craft Cut-outs: Now Available Individually. Visuals play an important role in how we communicate, but nice looking digital images can be a pain to find or create. That's a big reason we offer Common Craft Cut-outs - to provide a library of over 1,600 downloadable images that can be used in projects like presentations, blog posts and videos.

Until recently, our Cut-outs were only available through Common Craft membership (starting at $49 per year). Today, all Cut-outs are also available individually. Mathematics, Learning and Technology. Coming across You’re Getting Old, it struck me that the numbers generated by the site would be perfect for standard form exercises; put in a student’s date of birth and even the young ones will have some big numbers reported! For example, for a 12 year old, the following figures are generated, some updated while you watch. A Treasure Trove of Digital Citizenship Resources for Teachers. He-dictionary-shakespeare-may-have-owned-and-annotated. Resources For Teaching About Drugs, Alcohol, and Addiction.