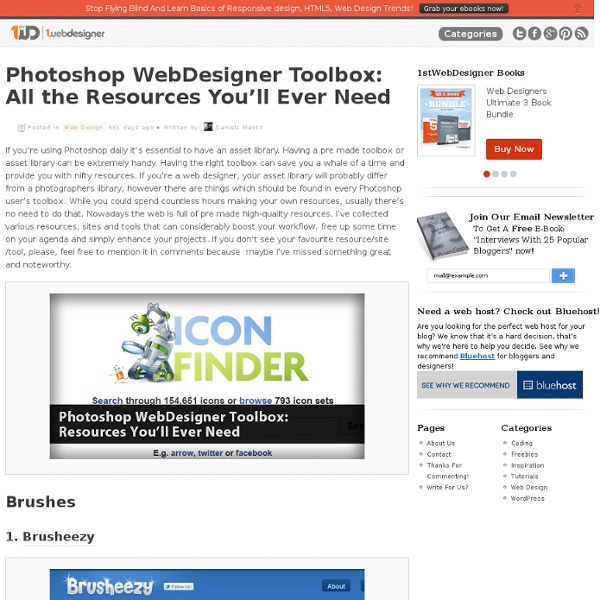 If you’re using Photoshop daily it’s essential to have an asset library. Having a pre made toolbox or asset library can be extremely handy. Having the right toolbox can save you a whale of a time and provide you with nifty resources. If you’re a web designer, your asset library will probably differ from a photographers library, however there are things which should be found in every Photoshop user’s toolbox. Brushes 1. Brusheezy is the place to share your free Photoshop brushes and other Photoshop related resources. 2. PS Brushes is another place where Photoshop brushes are gathered. 3. BrushLovers has one of the largest collections of exclusive and high-quality Photoshop brushes on the Web. Patterns 1. COLOURlovers is an international community of designers and artists of all kinds who visit the site to get color inspiration, ideas and feedback for both their professional and personal projects. 2. At Squid Fingers you can find over 100 creative patterns to use for your projects. 3. 4. Related:  Resource

Free PSDs & Resources for Web Designers by Orman Clark Abduzeedo | Graphic Design Inspiration and Photoshop Tutorials pixelcreation.fr magazine du graphisme design illustration video 3D: Accueil Are You Ready For A Web Design Challenge? - Smashing Magazine Advertisement This is not a normal Smashing Magazine post. I’m not going to teach you something new or inspire you with examples of great work. If you complete this challenge, it will make it easier for clients to sign off on your designs, and it will improve the quality of your work. So, what are we waiting for? The Challenge If you’re like me, you did some form of higher education in art and design and will know about “the crit.” These were terrifying meetings in which I justified my design approach and defended it against criticism. The ability to logically justify our designs is a skill many of us lack. My challenges is this: Write a blog post justifying the design approach you took to one of your websites. Admittedly, this might sound like a lot of effort, so let me explain why it is worth your while. Why This Challenge Is Worth Undertaking As I said in a previous article1, being a great designer is not enough. However, it isn’t just about the client. Where To Start Grid Layout Color

35 Excellent Wireframing Resources - Smashing Magazine Advertisement Wireframing is one of the most valuable parts of any web design project. It can save a designer tons of time by hashing out the details of a site’s architecture, functionality, and content prior to actually starting a visual design. But if done inefficiently, it can end up costing more time and can even create bigger headaches for both the client and the designer. Below are more than 35 resources for creating better wireframes, including tutorials on different methods and a variety of tools available. 1. Here are more than twenty wireframing articles, guides, and tutorials to help you improve your wireframing process. Wireframes Magazine This site offers tons of resources and articles about wireframing. Wire Frame Your Site A great introduction to the benefits of wireframing from Sitepoint. Ajax Wireframing Approaches A post in a series from Particletree about prototyping Ajax, this covers wireframing techniques. Framing the Problem An article about wireframing from ClickZ.

Don't Reinvent the Wheel - 100+ Links of Design Elements and Resources This time we will review some helpful resources for designers, how you can find them, and how can they help you. Have you ever thought that every day, while you are busy doing your work, there are a lot of people doing almost the same thing as you? And they are releasing it. For free. And sometimes we just forget all this stuff and lose a lot of time doing things that just didn’t need to be done. So, this is a post with a lot of links, and with my opinion about many of them. So, let’s rock! Creative Photo Collections Actually, most of you always use stock photos in your layouts. So, usually you have 2 options: Use premium stock photosTake your own photos I think there is a third option that we almost always forget: Some really artistic and creative photos out there. We have a lot of photo collections, with photos for specific situations. Why they are good: Using in-context funny or emotional images is the easiest way to get your reader’s attention, so you get more time to explain your point.

kulturbanause blog Color Theory for Designers, Part 1: The Meaning of Color - Smashing Magazine Color in design is very subjective. What evokes one reaction in one person may evoke a very different reaction in somone else. Sometimes this is due to personal preference, and other times due to cultural background. Color theory is a science in itself. This is the first in a three-part series on color theory. Warm Colors Link Warm colors include red, orange, and yellow, and variations of those three colors. Red and yellow are both primary colors, with orange falling in the middle, which means warm colors are all truly warm and aren’t created by combining a warm color with a cool color. Red (Primary Color) Link Red is a very hot color. Red can be associated with anger, but is also associated with importance (think of the red carpet at awards shows and celebrity events). Outside the western world, red has different associations. In design, red can be a powerful accent color. Examples The dark shades of red in this design give a powerful and elegant feel to the site. Cool Colors Link

10 UI Design Patterns You Should Be Paying Attention To - Smashing Magazine Advertisement Design patterns were first described in the 1960s by Christopher Alexander, an architect who noticed that many things in our lives happen according to patterns. He adapted his observations to his work and published many findings on the topic. In short, design patterns are solutions to recurring problems. You may be interested in the following related posts: 1. To fully appreciate the problem of registration, we should consider an annoyance that has led to the opinion that sign-up forms must die6. When would you actually use lazy registration? When users are allowed to try out your website product or service before making a decision (which not every website permits, though).When it is important to familiarize users with your system before they sign up, which can be a crucial step in their process of deciding whether to register. 7 Amazon lets you browse and add products to your shopping cart before signing up. 8 Picnik is another good example of lazy registration. 2. 3. 4. 5.

Improving Usability with Fitts’ Law Back in 1954, psychologist Paul Fitts published an article the detailed his theory on human mechanics as it pertained to aimed movement. It was Fitts’ observation that the action of pointing to or tapping an target object could be measured and predicted mathematically. Fitts stated that the size of the target object along with its distance from the starting location could be directly measured, allowing him to model the ease at which a person could perform the same action with a different target object. In 1954, this theory had no application for computers yet; however, it shouldn’t take a modern designer long to discover the powerful meaning this formula has in the context of user interfaces. Because of this, Fitts’ law has become a staple in the field of human-computer interaction (HCI), and has become one of the most accepted guidelines in the industry. Fitts’ law, at its simplest form, is common sense. How Fitts’ Law Works Here is the equation: In the equation above: Movement and Distances

Imprint - The Online Community for Graphic Designers Way back in the 20th Century, back before one small, viral meme could have more impact and influence than tons of Times op-eds, newspapers still mattered. But it was also a time of severely limited access to communication outlets. As A.J. Liebling noted: “Freedom of the press is guaranteed only to those who own... The New York Times got it wrong about the highly hyped Batman #50 with its description of the caped crusader’s nuptials to Catwoman. Fantasy artist Ken Kelly was just five years into his professional career when he received the assignment of a lifetime—painting the cover for… Chesley Bonestell is little remembered today except by hardcore science fiction fans. After 14 years in field, designer Russ Honican joined Trailer Park, where he runs the department of motion graphics and works hands on as a designer. Lana Roulhac has more than 10 years of design expertise, focusing especially on bringing humanity and relevance to government design and technology brands.