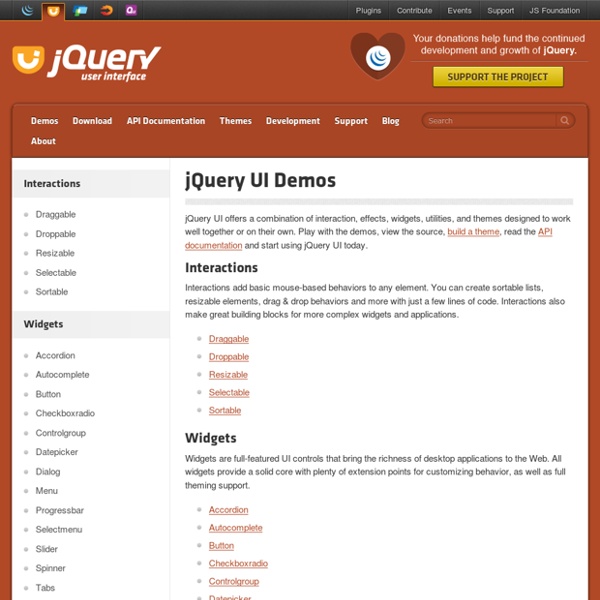 jQuery UI offers a combination of interaction, effects, widgets, utilities, and themes designed to work well together or on their own. Play with the demos, view the source, build a theme, read the API documentation and start using jQuery UI today. Interactions Interactions add basic mouse-based behaviors to any element. You can create sortable lists, resizable elements, drag & drop behaviors and more with just a few lines of code. Interactions also make great building blocks for more complex widgets and applications. Widgets Widgets are full-featured UI controls that bring the richness of desktop applications to the Web. Effects Effects add support for animating colors and class transitions, as well as providing several additional easings. Utilities Utilities used by jQuery UI to build interactions and widgets.

10 jQuery Pagination Plugins jQuery pagination plugins provide an easy way to automatically seperate your information into generated hyper-linked pages, abit like a book with page numbers. The implementation can either be a) all data is loaded on 1 page and then the plugin evenly splits the data and creates the pages; or b) by passing the page number to the back-end, where the appropriate data is fetched from the database and returned in some form. When dealing with small data sets its easier to have the content readily available, but still neatly organized and easy to access. Well, we have just the thing for you – check out the plugins and tutorials below.

20+ HTML5 Tutorials, Resources & Tips HTML5 offers plenty of potential for web designers and developers, especially when combined with CSS3. The possibilities of HTML5 are exciting, and many designers/developers have been creating amazing things that weren’t possible with HTML and CSS in the past. The life and career of a web designer/developer requires learning new techniques rather frequently due to changes in technology, and HTML5 is no exception. This post will serve as a guide to help you find tutorials and resources that will allow you to improve your own skills with HTML5.

Freeow! Used by hoopies and froods alike, Freeow! is a plugin for making Growl-like alerts or message boxes on your website. You can customize the look and animation of Freeow! BigVideo.js - The jQuery Plugin for Big Background Video The jQuery Plugin for Big Background Video (and Images) This plugin makes it easy to add fit-to-fill background video to websites. It can play silent ambient background video (or series of videos). Flat, Mobile, Responsive: Fresh JavaScripts and jQuery Plugins Made in September 2013 - noupe Sep 25 2013 jQuery plugins and JavaScript tools are collectibles you can’t get enough of. Just like WordPress themes, fonts, icons, basically any resource for designers and developers, they are available in masses. To separate the wheat from the chaff is harder than simply finding them.

Ajax Events Ajax requests produce a number of different events that you can subscribe to. Here's a full list of the events and in what order they are triggered. There are two types of events: 8 Released August just got a little hotter, because jQuery 1.8 final code is here! You can pick up the code from jQuery’s CDN: As usual, the Google and Microsoft CDNs will also have the file soon. Please don’t ask us about when they’ll be there, we don’t know and we don’t control those CDNs!

3D Models, Website Templates and Illustrations blog May 9th, 2014 Web development is an ever expanding field. With so many new trends hitting the market every season, it is important to keep your works up-to-date and bring some new, catchy features to your projects. This is when free templates would come in handy. 15+ jQuery Popup Modal Dialog Plugins and Tutorials « Swadesh Programming Blog Modal dialog windows are a great way to show quick information to your users, but to also alert them of errors, warnings, prompts for information and more. When you bring jQuery into the mix, you know you’re going to end up with a slick dialog that really makes the application or website come alive. The following is a list of 15+ jQuery Popup Modal Dialog Plugins and Tutorials.

Cody - Free Library With HTML5 Gems for Instant Use - noupe Jun 03 2014 Cody is a great project for designers and developers. The webworker couple Claudia Romano and Sebastiano Guerriero from London put together a library of out-of-the-box HTML5 solutions. Plus, they do not only deliver the solutions, they also explain the use of each of them in elaborate, comprehensive articles. That way, Cody is not only a valuable resource for seekers of key-ready components, but also for those eager to learn technologies from the ground up. The library still has to grow a lot, but what is there is already remarkable.

Apprise - The attractive alert alternative for jQuery The initial release of Apprise has been a major success and is often what this site is most commonly associated with. As far as I've been able to track, Apprise has been downloaded over 23,000 times and has been mentioned in over 46,000 blogs. Which is fantastic, especially for something that I've never been very proud of. I've wanted to update, and change the UI, of this for over a year now. Time has finally permitted and it's, finally, ready.

8 Most Popular jQuery Plugins of January 2012 Last month developers were busy with jQuery and it is time to go through some of the most popular jQuery plugins they created in January 2012. 1. Scrollorama Coming to a Screen Near You: CSS3 Animations and The New JavaScript Method Animate() - noupe Jun 04 2014 With CSS3 animations in HTML documents have become fairly easy to achieve. Using the "@keyframes" rule various properties such as position and size of an HTML element get defined. Then the property "animation" cares for getting the keyframes up and running according to their definitions.

15 Resources To Get You Started With jQuery From Scratch Maybe you're a seasoned jQuery pro. Heck, maybe you're John Resig. On the other hand, maybe you read words like "Prototype", "jQuery", and "Mootools" and think to yourself, "What the heck are these?" Now is the time to learn.