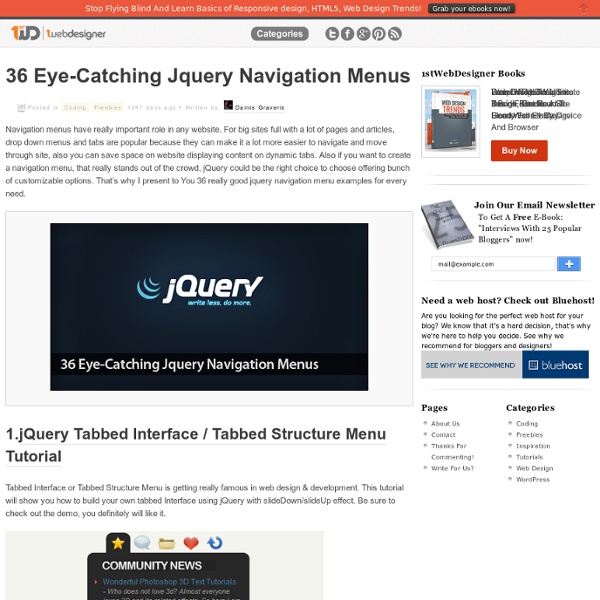 Navigation menus have really important role in any website. For big sites full with a lot of pages and articles, drop down menus and tabs are popular because they can make it a lot more easier to navigate and move through site, also you can save space on website displaying content on dynamic tabs. Also if you want to create a navigation menu, that really stands out of the crowd, jQuery could be the right choice to choose offering bunch of customizable options. That’s why I present to You 36 really good jquery navigation menu examples for every need. 1.jQuery Tabbed Interface / Tabbed Structure Menu Tutorial Tabbed Interface or Tabbed Structure Menu is getting really famous in web design & development. Preview || Download 2.Animated Menus Using jQuery Learn how to create this amazing animated effect menu just with plain Xhtml,CSS and Javascript help, similar to Dragon Interactive (dragoninteractive.com). Preview || Download 2.1. View Demo 3. Preview || Download 4.jQuery ListNav Plugin 5.1. 8. Related:  jquery

jQuery Tabbed Navigation Tutorial – How to create your own fancy menu Lot of people have asked how to create the tabbed navigation as seen on my site. Josh who coded it originally has agreed to write a tutorial. One of the many challenges when it comes to information architecture is the idea of presenting enough information for people to make informed decisions, but not overwhelm them while doing so. This can be particularly tricky when it comes to dealing with navigation. One technique that is often used to combat this problem is the concept of a tabbed navigation. Exceptional, we’ve got a standard navigation with a sub-navigation underneath. In an attempt to get explain this, lets go ahead and setup our own tabbed navigation using some jQuery and CSS. First thing’s first, we’ll want to setup our basic markup for the navigation. Notice the nested <ul>s within the <li>s. Let’s go ahead and create our CSS now, so that we’ve got something to work with in jQuery. First we defined some basic text styling for the <body> of the page. More like this:

10 incredible JQuery navigation menus Animated Drop Down menu with JQuery A DropDrown menu is often a good choice when you have many items to display. In such cases, what about animating it? Source iPod style menu The iPhone is indeed a very good example of minimalistic, but great looking, design. Source Superfish â€“ jQuery menu plugin Superfish is a JQuery plugin especially dedicated to menus. Source Lavalamp for JQuery lovers Lavalamp is a simple, ready to use JQuery plugin which allow you to create a stunning effect over your horizontal navigation bars. Source How to make a smooth animated menu with JQuery A very nice tutorial to learn to create a very nice and artistic effect for your websites. Source Navigation effect using JQuery Another “Great to read, Simple to implement” JQuery tutorial. Source Animated JQuery menu Among other things, JQuery is very useful for an easy manipulation of the CSS background-position property. Source How to create a vertical sliding JQuery menu Source Apple menu, improved Source Source

jQuery for Designers How to Solve the Problem Recreating this effect is simple to do if you know what plugins to use. There are plugins out in the wild already, but we want our jQuery to satisfy the following requirements: Degrades perfectly without JavaScript enabledSliding panels effect without hogging browser CPUNext and previous buttons added using JavaScript because they hold no use without JavaScriptHitting the page with a specific hash (i.e. page.html#preview) shows the right tab, and highlights the right navigationAny link on the page that refers back to a panel should trigger the effect and highlight the right navigation – this should happen without any extra work The hash is the emphasised part (including the # symbol) in: In fact, our version of this slider will be better than Panic’s and the current jQuery plugins if we can meet all of the requirements. I’ve provided a screencast to walk through how create this functionality. Plugins Required Markup

jQuery UI Tabs Styling Most of these examples only involve CSS changes that can be added inline to your page to override the defaults. Note, however, that for the left and right side examples you need to explicitly set the tab content height and the tabs list width, and that for the single line of tabs you must specify the overall list width. Tabs on a single line. This implementation also requires the addition of a div wrapper around the tabs ul. Show HTML<div class="tabs"> <div class="scroller"> <ul> ... Nunc eleifend iaculis nibh, sed semper nisl feugiat nec. Pellentesque ac elit et nulla posuere convallis quis ut dolor.

Paper Strips Menus - Smashing Magazine Advertisement The beauty of an excellent design lies in designer’s attention to smallest details. Conventions are our friends; however, to stand out, a design needs a creative spin, an elegant play of colors, some unique flavour — a small detail that would make a big difference. Where the boundaries between traditional solutions and unusual approaches become fuzzy, designers tend to get creative. However, to come up with unusual ideas isn’t that easy, particularly if you are dealing with some daily routine-tasks. Still, nothing is impossible. Deb Sofield sticks posts on a paper pile. A menu in the shape of coloured loops. These ties will never hang on the neck of a web-developer. The navigation menu is simple, nice and fits perfectly to the overall design; navigation options appear to stick out of the content area. It's done.

jQuery Expander slideToggle("fast") The .slideToggle() method animates the height of the matched elements, causing the matched elements to be hidden or shown in a "sliding" manner. If the element is initially shown, it will be hidden. If it is initially hidden, it will be shown. When the height reaches 0 after a hiding animation, the display style property is set to 'none' so the element no longer affects the layout of the page. The duration of the animation of this section is 'fast', i.e., 200 milliseconds. John V. It is important to mention that the Atanasoff-Berry Computer was never patented and because of that it was not known until 1960's. First public recognition: In 1970 John Atanasoff was invited to Bulgaria by the Bulgarian Academy of Sciences, and the Bulgarian Government conferred to him the Order of Saints Cyril and Methodius, First Class (Bulgaria's highest honor accorded a scientist). Back to top slideToggle("slow")

Using jQuery with ASP .NET A brief introduction to jQuery and ways in which we can integrate it into ASP .NET Introduction In September 2008 Scott Guthrie, the head of the ASP.NET team, announced in a blog post that Visual Studio would be shipping with the jQuery library. He writes: “jQuery is a lightweight open source JavaScript library (only 15kb in size) that in a relatively short span of time has become one of the most popular libraries on the web. With that, JQuery is officially embraced by ASP.NET. A brief introduction of JQuery jQuery is the star among the growing list of JavaScript libraries. Listing 1: jQuery code for making a zebra-style table 1. 2. 3. 5. The magic dollar sign ($) and a chain of operations In jQuery, the most powerful character / symbol is the dollar sign. 1. Think of it as a long sentence with punctuations. Get a div with class name is test; Insert a paragraph with class name is quote; Add a little text to the paragraph; Operate on the DIV using a predefined method called fadeout. 1. 2. 02. 03. 06.

Demos jQuery UI offers a combination of interaction, effects, widgets, utilities, and themes designed to work well together or on their own. Play with the demos, view the source, build a theme, read the API documentation and start using jQuery UI today. Interactions Interactions add basic mouse-based behaviors to any element. Widgets Widgets are full-featured UI controls that bring the richness of desktop applications to the Web. Effects Effects add support for animating colors and class transitions, as well as providing several additional easings. Utilities Utilities used by jQuery UI to build interactions and widgets. Navigation Menus: Trends and Examples - Smashing Magazine Advertisement Navigation is the most significant element in web design. Since web-layouts don’t have any physical representation a user can stick to, consistent navigation menu is one of the few design elements which provide users with some sense of orientation and guide them through the site. Users should be able to rely on it which is why designers shouldn’t mess around with it. That’s why in most cases it’s where simple, intuitive and conventional solutions are usually the best option. This article presents recent trends, examples and innovative solutions for design of modern navigation menus. 1. The most significant task a navigation menu has to fulfill is to unambiguously guide the visitors through the different sections of the site. This navigation scheme can be used not only for the horizontal navigation; it can can be applied to vertical navigation as well. 2. In any case over the last months a number of web-sites integrated Mac-styled-navigation in their web-sites. 3. 4. 5. 6.