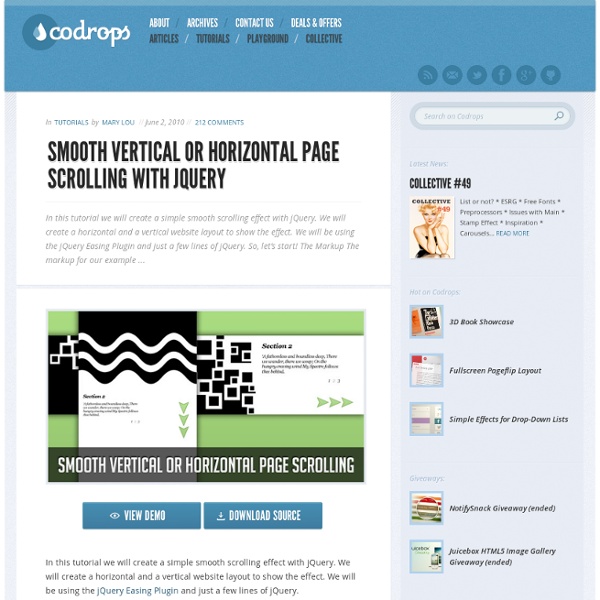 jQuery Easing Plugin Description A jQuery plugin from GSGD to give advanced easing options. Please note, the easing function names changed in version 1.2. Please also note, you shouldn't really be hotlinking the script from this site, if you're after a CDN version you could do worse than try cdnjs.com Download Download the following: Example Click on any of the yellow headers to see the default easing method in action (I've set as easeOutBounce for the demo, just because it's obviously different). Select easing types for the demo first one for down, second one for up. The Clicker Updates 12/11/07 1.3 jQuery easing now supports a default easing mode. 04/10/07 1.2 Updated to include all methods from Robert Penners easing equations. 28/06/07 1.1.1 Updated the method to not overwrite the newly renamed 'swing', or the new 'linear' style coming in 1.1.3. 22/06/07 Rewritten the above to include callback syntax, nothing else has changed. Advertisements Need reliable hosting for your blog? Credits Donate Usage Default Custom

jQuery topLink Plugin Last week I released a snippet of code for MooTools that allowed you to fade in and out a "to the top" link on any page. Here's how to implement that functionality using jQuery. The XHTML <a href="#top" id="top-link">Top of Page</a> A simple link. The CSS A little CSS for position and style. The jQuery JavaScript You'll see that I've added jQuery's ScrollTo plugin to add some smoothness to the anchor. Please note that this version doesn't work with Internet Explorer due to IE's lack of CSS "position:fixed" support. Know of a better way to incorporate IE support? Be Heard Tip: Wrap your code in <pre> tags or link to a GitHub Gist! Older Backup Your Database into an XML File Using PHP Newer Animated AJAX Record Deletion Using jQuery