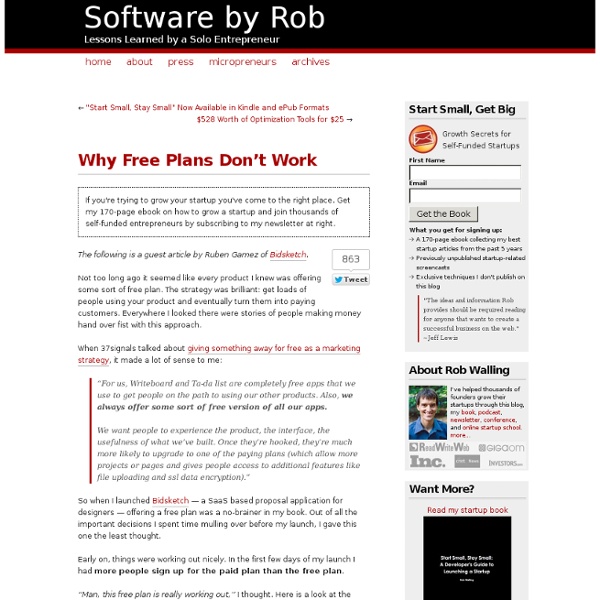 If you're trying to grow your startup you've come to the right place. Get my 170-page ebook on how to grow a startup and join thousands of self-funded entrepreneurs by subscribing to my newsletter at right. The following is a guest article by Ruben Gamez of Bidsketch. Not too long ago it seemed like every product I knew was offering some sort of free plan. The strategy was brilliant: get loads of people using your product and eventually turn them into paying customers. When 37signals talked about giving something away for free as a marketing strategy, it made a lot of sense to me: “For us, Writeboard and Ta-da list are completely free apps that we use to get people on the path to using our other products. So when I launched Bidsketch — a SaaS based proposal application for designers — offering a free plan was a no-brainer in my book. Early on, things were working out nicely. “Man, this free plan is really working out,” I thought. I tried all sorts of tactics to convert my free users:

Don’t Celebrate Until The Ink Is Dry And The Cash Is In The Bank Recently I wrote a blog post about how I hated losing, but I embrace it as a way to learn, improve and increase my win rates. You’re Most Vulnerable Right After You’ve Won the Deal One of the things I learned from my “post-game analysis” is that you’re most vulnerable right after you’ve won the deal. I know it sounds counter-intuitive but my experience tells me it’s true. At the moment you pop the champagne cork and let down your guard is when you’re easiest to attack. In my blog post about how I hate losing I told the story about how when I was running my first company in the UK I competed and won a major contract with the largest water company, Thames Water, that would have been worth millions of dollars. An external consultant helping the Thames Water procurement team overturned the decision to use my company and got them to select a small software company. And the reverse lesson is also true. For simplicity, let’s call this person inside your new potential customer, “the enemy.”

Going Freemium: One Year Later On September 1st, 2009 we announced that MailChimp was going freemium. On that day, we had 85,000 users. Now, slightly more than a year later, we have more than 450,000 users. We grew our user base five times in one year. Earlier this month, we actually doubled our freemium plan from 500 subscribers to 1,000 subscribers. So now, even more people can take advantage of MailChimp’s powerful email marketing and social features. Another thing that’s increased dramatically since going freemium is the number of lunches I’m invited to; seems entrepreneurs and VCs really want to "pick my brain" about how freemium is doing for us. See, I’ve heard a lot of discussion about MailChimp’s success with freemium, but it’s scary that people would want to model their companies around us. First, the stats Yeah, I know you’re just here for the numbers. "Yeah, but they’re all tiny customers, right?" 12% of our users had lists greater than 10k subscribers But at the end of August 2010, that 12% grew to 20%:

The Tragic Death of Practically Everything Wired Editor in Chief Chris Anderson is catching flak for the magazine’s current cover story, which declares that the Web is dead. I’m not sure what the controversy is. For years, once-vibrant technologies, products, and companies have been dropping like teenagers in a Freddy Krueger movie. Thank heavens that tech journalists have done such a good job of documenting the carnage as it happened. After the jump, a moving recap of some of the stuff that predeceased the Web–you may want to bring a handkerchief. Internet Explorer, as you’ll recall, died in 2004. In 2005, the Macintosh suffered a trauma which inevitably led to its death earlier this year. Linux absolutely, positively died in 2006. The venerable technology known as TV died in 2006. too. By 2007, Microsoft Office had bit the big one. Microsoft itself also passed away in 2007. E-mail had a good long life, but it too went to its reward in 2007. I hope this doesn’t come as a shock, but Facebook died in 2008. The netbook croaked in April.

A VC Market segmentation Criteria for segmenting[edit] An ideal market segment meets all of the following criteria: It is possible to measure.It must be large enough to earn profit.It must be stable enough that it does not vanish after some time.It is possible to reach potential customers via the organization's promotion and distribution channel.It is internally homogeneous (potential customers in the same segment prefer the same product qualities).It is externally heterogeneous,( potential customers from different segments have different quality preferences).It responds consistently to a given market stimulus.It can be reached by market intervention in a cost-effective manner.It is useful in deciding on the marketing mix.It identifies the target customer(s) (surrogate(s))It provides supporting data for a market positioning or sales approach. Methods for segmenting consumer markets[edit] Geographic Segmentation[edit] Demographic Segmentation[edit] Behavioral Segmentation[edit] Lifestyle Segmentation[edit]

Eye Candy: Shipping Containers Grunge Up Stark Modern Office | Co.Design The Swiss architecture firm Group8 has managed to marry two of the biggest cliches in contemporary architecture -- shipping containers and stark white offices -- to produce something entirely unique. The project is a new workplace for Group8 in Geneva, and the architects' sleight of hand was to load up a massive open floorplan with more than a dozen steel containers, rust, grime and all. Here's the interior of one of the containers. Mostly, they're used for conferencing and brainstorming. The office is called Cargo (of course). We're sold on pure aesthetic grounds. We also love the idea Group8's toying with here. [Via DailyTonic ; images by Régis Golay of FEDERAL Studio in Geneva and courtesy of Group8 ]

Flowr. Real-time Collaboration, knowledge exchange and smart information flow. Stoned scientists Stephen Jay GouldStephen Jay Gould Renowned scientist and Harvard Professor Stephen Jay Gould died in May 2002, of lung cancer. Gould was the author of many books on science and evolution, including The Mismeasure of Man, and his massive 1400-page opus The Structure of Evolutionary Theory, published shortly after his death. While many obituaries marked Gould’s passing, few mentioned that Gould had been using marijuana since at least 1982. That was the year Gould was diagnosed with a rare and incurable cancer called abdominal mesothelioma, and told he had eight months to live. Gould survived and thrived for 20 years after receiving that grim diagnosis, with treatments including surgery, radiation, and chemotherapy. Yet above and beyond these, Gould claimed that it was pot that saved his life. “It is beyond my comprehension that any humane person would withhold such a beneficial substance from people in such great need simply because others use it for different purposes,” said Gould. ?