Git ready » learn git one commit at a time 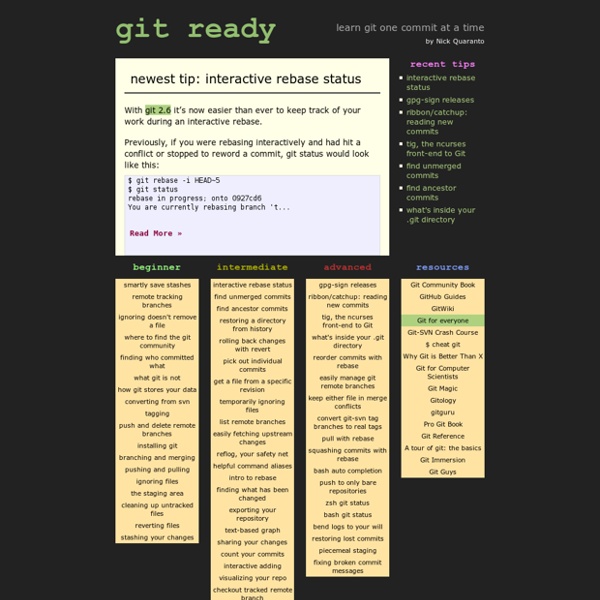 Using the DOM in an AngularJS application - The Problem Solver Using the DOM in an AngularJS application Index: Even though you should not manipulate the DOM in an AngularJS application but leave that up to AngularJS itself to do there are certainly places where you will need to interact with it. For example you might want to react to events and do something in reusable manner. Sure you can use the ngClick directive to react to a click but there are cases where you need to react to a click and don't want to repeat the same click handler each time. The place to add these kind of interactive DOM related code in AngularJS is in a directive and not in a controller. Git: The Safety Net for Your Projects I remember January 10, 2010, rather well: it was the day we lost a project’s complete history. We were using Subversion as our version control system, which kept the project’s history in a central repository on a server. And we were backing up this server on a regular basis—at least, we thought we were. The server broke down, and then the backup failed. Our project wasn’t completely lost, but all the historic versions were gone. Shortly after the server broke down, we switched to Git.

GIT Howto Index Here is a collection of mailing list postings made by various people describing how they use git in their workflow. Imagine that git development is racing along as usual, when our friendly neighborhood maintainer is struck down by a wayward bus. Out of the hordes of suckers (loyal developers), you have been tricked (chosen) to step up as the new maintainer. This howto will show you "how to" do it. This is how-to documentation for people who want to add extension commands to git. It should be read alongside api-builtin.txt.

Sending redis traffic through an SSL tunnel with stunnel Lately if you have been paying attention to tech or even mainstream media you might have seen a few stories about data breaches. Sometimes these data breaches have allowed attackers to gather unencrypted passwords or credit card numbers. In the past these types of attacks still happened, but there was not as many attacks as today and when they happened they were kept secret. With more and more internet based services becoming part of peoples lives, there is even more targets for attackers who are looking to get sensitive data.

Preface Git is a version control Swiss army knife. A reliable versatile multipurpose revision control tool whose extraordinary flexibility makes it tricky to learn, let alone master. As Arthur C. Clarke observed, any sufficiently advanced technology is indistinguishable from magic. The Mooney Project » Angular JS: Navigator Pattern New To AngularJS? Not sure what Angular JS is? The short version is that it is a client-side Javascript library. And unlike most of those libraries I’ve fooled around with, it’s very quick to get started with, and makes a lot of stuff really easy. Pulling data from JSON REST services. git - the simple guide - no deep shit! git - the simple guide just a simple guide for getting started with git. no deep shit ;) by Roger Dudler credits to @tfnico, @fhd and Namics this guide in deutsch, español, français, indonesian, italiano, nederlands, polski, português, русский, türkçe, မြန်မာ, 日本語, 中文, 한국어 Vietnamese please report issues on github

Latexdiff and git i 5 Votes A lot of scientists have latex as their preferred format for writing articles. A very nice tool when working on latex projects with several people is latexdiff , a perl script that based on two versions of a latex document creates a "diff document" which shows all new (text) additions in blue with curly underline, and all removals in red with a through line. Latexdiff works well with svn and cvs repositories, where you ask latexdiff to simply compare a given file in two given revisions. However, to my knowledge this has not yet been extended to git . A practical introduction to functional programming at Mary Rose Cook Many functional programming articles teach abstract functional techniques. That is, composition, pipelining, higher order functions. This one is different. It shows examples of imperative, unfunctional code that people write every day and translates these examples to a functional style.