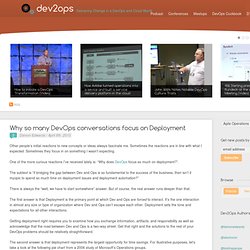 Sometimes the reactions are in line with what I expected. Sometimes they focus in on something I wasn’t expecting. One of the more curious reactions I’ve received lately is: “Why does DevOps focus so much on deployment?”. The subtext is “if bridging the gap between Dev and Ops is so fundamental to the success of the business, then isn’t it myopic to spend so much time on deployment issues and deployment automation?” There is always the “well, we have to start somewhere” answer. Jelastic — Top Java Host, Rock-Solid Java in the Cloud, Java Server Hosting, Java Cloud Computing. CF Console - Log in. 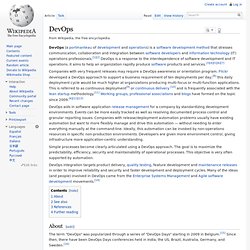 It aims to help an organization rapidly produce software products and services.[3][4][5][6][7] Companies with very frequent releases may require a DevOps awareness or orientation program. Flickr developed a DevOps approach to support a business requirement of ten deployments per day;[8] this daily deployment cycle would be much higher at organizations producing multi-focus or multi-function applications.

This is referred to as continuous deployment[9] or continuous delivery [10] and is frequently associated with the lean startup methodology.[11] Working groups, professional associations and blogs have formed on the topic since 2009.[6][12][13] About[edit] Introducing Metal as a Service: provisioning for the hyperscale era. As we move from “tens” to “hundreds” to “thousands” of nodes in a typical data centre we need new tools and practices. 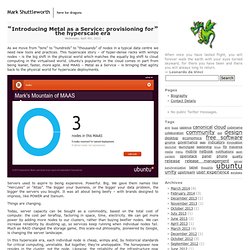 This hyperscale story – of hyper-dense racks with wimpy nodes – is the big shift in the physical world which matches the equally big shift to cloud computing in the virtualised world. Ubuntu’s popularity in the cloud comes in part from being leaner, faster, more agile. And MAAS – Metal as a Service – is bringing that agility back to the physical world for hyperscale deployments. Servers used to aspire to being expensive. Powerful. Things are changing. Comparison of open source configuration management software. This is a comparison of notable free and open source configuration management software, suitable for tasks like server configuration, orchestration and infrastructure as code typically performed by a system administrator. 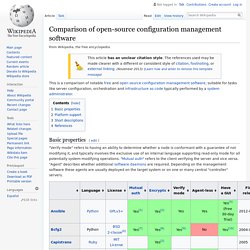 Basic properties[edit] Platform support[edit] Note: This means platforms on which a recent version of the tool has actually been used successfully, not platforms where it should theoretically work since it is written in good portable C/C++ or an interpreted language. It should also be listed as a supported platform on the project's web site. Puppet versus Chef: 10 reasons why Puppet wins. Puppet, Chef, cfengine, and Bcfg2 are all players in the configuration management space. 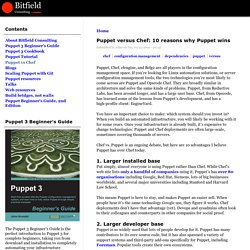 If you’re looking for Linux automation solutions, or server configuration management tools, the two technologies you’re most likely to come across are Puppet and Opscode Chef. They are broadly similar in architecture and solve the same kinds of problems. Puppet, from Reductive Labs, has been around longer, and has a large user base. Chef, from Opscode, has learned some of the lessons from Puppet’s development, and has a high-profile client: EngineYard. Puppet Labs: IT Automation Software for System Administrators. Puppet Open Source: IT Automation Software for System Administrators. Puppet Open Source is a flexible, customizable framework available under the Apache 2.0 license designed to help system administrators automate the many repetitive tasks they regularly perform. 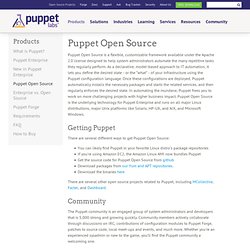 As a declarative, model-based approach to IT automation, it lets you define the desired state - or the “what” - of your infrastructure using the Puppet configuration language. Once these configurations are deployed, Puppet automatically installs the necessary packages and starts the related services, and then regularly enforces the desired state. In automating the mundane, Puppet frees you to work on more challenging projects with higher business impact. Puppet Open Source is the underlying technology for Puppet Enterprise and runs on all major Linux distributions, major Unix platforms like Solaris, HP-UX, and AIX, and Microsoft Windows. Puppet (software) Puppet is a tool designed to manage the configuration of Unix-like and Microsoft Windows systems declaratively. 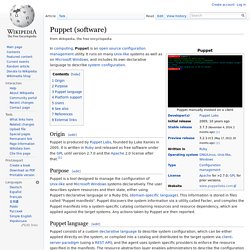 The user describes system resources and their state, either using Puppet's declarative language or a Ruby DSL (domain-specific language). This information is stored in files called "Puppet manifests". Puppet discovers the system information via a utility called Facter, and compiles the Puppet manifests into a system-specific catalog containing resources and resource dependency, which are applied against the target systems. Any actions taken by Puppet are then reported. FrontPage - Juju. Juju (software) Juju's mission is to provide a modeling language for users that abstracts the specifics of operating complex big software topologies. 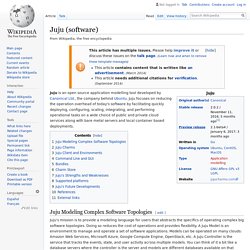 Doing so reduces the cost of operations and provides flexibility. A Juju Model is an environment to manage and operate a set of software applications. Models can be operated on many clouds: Amazon Web Services, Microsoft Azure, Google Compute Engine, OpenStack, etc. A Juju Controller is the service that tracks the events, state, and user activity across multiple models. Juju Charms Collection in Launchpad. Bazaar branches for Juju Charms Collection. Why the juju charm store will change the way you use Ubuntu Server - Jorge's Stompbox.

Yikes, quite a statement! 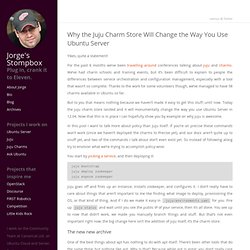 For the past 6 months we’ve been travelling around conferences talking about juju and charms. We’ve had charm schools and training events, but it’s been difficult to explain to people the differences between service orchestration and configuration management, especially with a tool that wasn’t so complete. Thanks to the work for some volunteers though, we’ve managed to have 58 charms available in Ubuntu so far. But to you that means nothing because we haven’t made it easy to get this stuff, until now. Today the juju charm store landed and it will monumentally change the way you use Ubuntu Server in 12.04. In this post I want to talk more about policy than juju itself. Chef (software) The user writes "recipes" that describe how Chef manages server applications (such as Apache, MySQL, or Hadoop) and how they are to be configured. 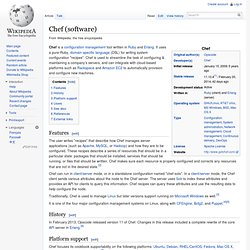 These recipes describe a series of resources that should be in a particular state: packages that should be installed, services that should be running, or files that should be written. Chef makes sure each resource is properly configured and corrects any resources that are not in the desired state.[2] Chef can run in client/server mode, or in a standalone configuration named "chef-solo". In a client/server mode, the Chef client sends various attributes about the node to the Chef server. The server uses Solr to index these attributes and provides an API for clients to query this information. Traditionally, Chef is used to manage Linux but later versions support running on Microsoft Windows as well.[3]

Open source configuration management - CFEngine - Distributed Configuration Management. CFEngine. History[edit] CFEngine 1[edit] The CFEngine project began in 1993 as a way for author Mark Burgess (then a post-doctoral fellow of the Royal Society at Oslo University, Norway) to get his work done by automating the management of a small group of workstations in the Department of Theoretical Physics. Like many post-docs and PhD students, Burgess ended up with the task of managing Unix workstations, scripting and fixing problems for users manually. Scripting took too much time, the flavours of Unix were significantly different, and scripts had to be maintained for multiple platforms, drowning in exception logic. After discussing the problems with a colleague, Burgess wrote the first version of CFEngine (the configuration engine) which was published as an internal report[1] and presented at the CERN computing conference.