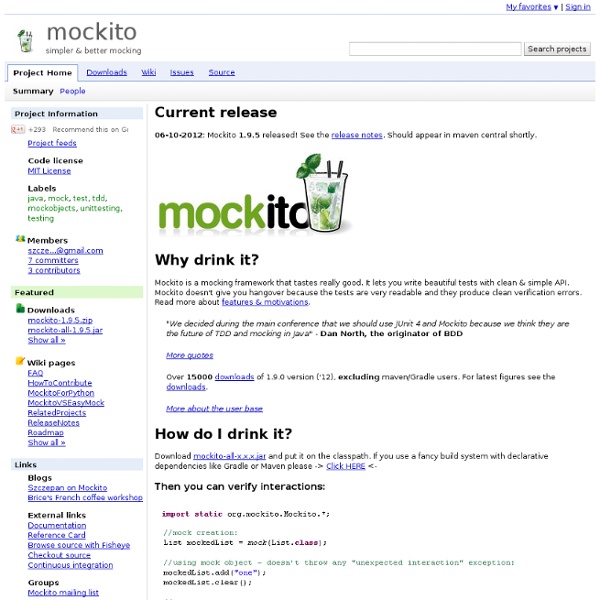 06-10-2012: Mockito 1.9.5 released! See the release notes. Should appear in maven central shortly. Mockito is a mocking framework that tastes really good. "We decided during the main conference that we should use JUnit 4 and Mockito because we think they are the future of TDD and mocking in Java" - Dan North, the originator of BDD More quotes Over 15000 downloads of 1.9.0 version ('12), excluding maven/Gradle users. More about the user base Download mockito-all-x.x.x.jar and put it on the classpath. Then you can verify interactions: Or stub method calls Click here for more documentation and examples. If you have any suggestions, find documentation unclear or you found a bug, write to our mailing list. Mockito is served to you by Szczepan Faber and friends. Firstly, hats down before EasyMock folks for their ideas on beautiful and refactorable mocking syntax. Special thanks to Steve Christou for setting up the continuous builds at his Hudson server. Thanks to YourKit for the profiler! Related:  DEVOPS

Mocks Aren't Stubs The term 'Mock Objects' has become a popular one to describe special case objects that mimic real objects for testing. Most language environments now have frameworks that make it easy to create mock objects. What's often not realized, however, is that mock objects are but one form of special case test object, one that enables a different style of testing. In this article I'll explain how mock objects work, how they encourage testing based on behavior verification, and how the community around them uses them to develop a different style of testing. I first came across the term "mock object" a few years ago in the Extreme Programming (XP) community. But as often as not I see mock objects described poorly. This difference is actually two separate differences. Regular Tests I'll begin by illustrating the two styles with a simple example. These two behaviors imply a couple of tests, these look like pretty conventional JUnit tests. Tests with Mock Objects Using EasyMock class OrderStateTester...

Test Driven Development (TDD): Best Practices Using Java Examples | Technology In the previous article Test Driven Development (TDD): Example Walkthrough an example of TDD was given. It went from writing first test and its implementation to having a set of requirements fully tested and developed. Now it’s time to learn what the best TDD practices are. This article will be built on examples from the previous one. Best practices are solutions to a set of problems under certain situations. Some of the best practices described here are inherited from other sets of practices and used when doing TDD. Source code for all examples can be found in the github repository Before explaining best practices, it is important to understand the TDD life-cycle. Write the testRun the test (there is no implementation code, test does not pass)Write just enough implementation code to make the test passRun all tests (tests pass)RefactorRepeat Test-driven development is not about testing. Naming Conventions [GRADLE: build.gradle] Tools

Unit testing with mock objects Unit testing has become widely accepted as a "best practice" for software development. When you write an object, you must also provide an automated test class containing methods that put the object through its paces, calling its various public methods with various parameters and making sure that the values returned are appropriate. When you're dealing with simple data or service objects, writing unit tests is straightforward. For example, to unit test an object that uses a database, it may be burdensome to install, configure, and seed a local copy of the database, run your tests, then tear the local database down again. Mock in the middle The common coding style for testing with mock objects is to: Create instances of mock objectsSet state and expectations in the mock objectsInvoke domain code with mock objects as parametersVerify consistency in the mock objects While this pattern is very effective for many cases, sometimes the mock object cannot be passed into the object being tested.

Continuous Integration I vividly remember one of my first sightings of a large software project. I was taking a summer internship at a large English electronics company. My manager, part of the QA group, gave me a tour of a site and we entered a huge depressing warehouse stacked full with cubes. But this needn't be the way. This contrast isn't the result of an expensive and complex tool. When I've described this practice to people, I commonly find two reactions: "it can't work (here)" and "doing it won't make much difference". The term 'Continuous Integration' originated with the Extreme Programming development process, as one of its original twelve practices. Although Continuous Integration is a practice that requires no particular tooling to deploy, we've found that it is useful to use a Continuous Integration server. Building a Feature with Continuous Integration I begin by taking a copy of the current integrated source onto my local development machine. However my commit doesn't finish my work.

ContinuousDelivery delivery · version control · continuous integration tags: Continuous Delivery is a software development discipline where you build software in such a way that the software can be released to production at any time. You’re doing continuous delivery when: [1] Your software is deployable throughout its lifecycle Your team prioritizes keeping the software deployable over working on new features Anybody can get fast, automated feedback on the production readiness of their systems any time somebody makes a change to them You can perform push-button deployments of any version of the software to any environment on demand You achieve continuous delivery by continuously integrating the software done by the development team, building executables, and running automated tests on those executables to detect problems. To achieve continuous delivery you need: a close, collaborative working relationship between everyone involved in delivery (often referred to as a "DevOps culture" [2]).

Codenvy Introduces Docker-Powered Developer Workspaces Codenvy has evolved its flagship service from a cloud-based code editor to a full fledged, container-based development environment. Codenvy CEO and Founder Tyler Jewell told InfoQ that Codenvy is no longer an “IDE, but an orchestration engine” that wants to optimize “everything before the commit.” Codenvy claims that developers spend more than thirteen hours per week configuring and maintaining their development environment. Codenvy is microservices-powered to deliver workspaces that are responsive and fast-loading. “Runners” are Docker-encapsulated processes that execute all the components of an application. With native git support, the Developer Environment Cloud lets developers clone public or private repositories into the internal git repository. When a Project is created, its Project tree is populated with a set of files that are the code, assets, and resources. This product evolution resulted from a gap in the developer workflow noticed by Codenvy CEO Tyler Jewell.

For unit testing, I find this far easier to work with than jmock.org or www.easymock.org. One thing it cannot do is mock static methods. I of the other 2 can do that by superunknown Apr 10