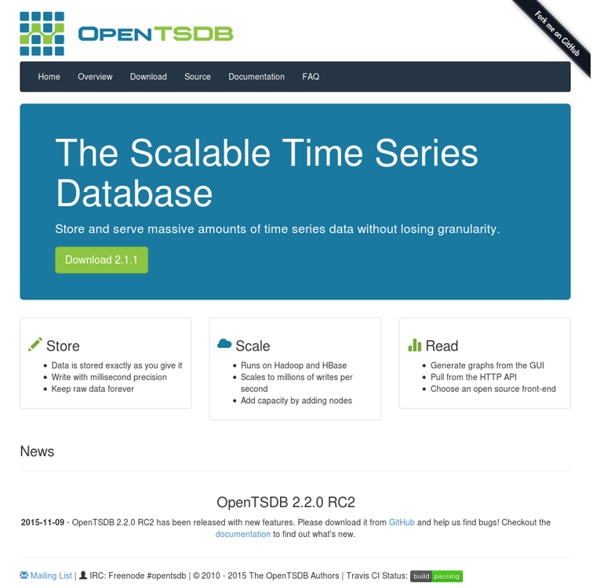 D3.js - Data-Driven Documents Mother • Sen.se What do you care about today? Apps to help you feel better, gain peace of mind, know yourself and your environment, make life easier. Sense Mother will know how to help you in more and more areas of your daily life. Select the App that meets your current needs and concerns. Sense Mother and her Motion Cookies will seamlessly adapt. WalkAre you active enough to stay fit? FridgeGet notified if the fridge door is left open and it gets warmer. The R Project for Statistical Computing The Unreasonable Effectiveness of Data Crossfilter Fast Multidimensional Filtering for Coordinated Views Crossfilter is a JavaScript library for exploring large multivariate datasets in the browser. Crossfilter supports extremely fast (<30ms) interaction with coordinated views, even with datasets containing a million or more records; we built it to power analytics for Square Register, allowing merchants to slice and dice their payment history fluidly. Since most interactions only involve a single dimension, and then only small adjustments are made to the filter values, incremental filtering and reducing is significantly faster than starting from scratch. Crossfilter uses sorted indexes (and a few bit-twiddling hacks) to make this possible, dramatically increasing the perfor­mance of live histograms and top-K lists. For more details on how Crossfilter works, see the API reference. Example: Airline on-time performance February 28, 2001 236 mi. +139 min. 304 mi. +83 min. 569 mi. +172 min. 646 mi. +97 min. 370 mi. +73 min. 325 mi. +92 min. +16 min. 361 mi.

The 2014 Algorithms Solving 2015's Problems This list focuses (mainly) on what we usually think of as algorithms, which are computing/mathematical schemes. There were many more developed last year, of course, full-on libraries of code being generated one after the other, many destined to wither and fade within the Cornell University servers supporting the arXiv open-access research database. But some stood out. Exclusion from the list shouldn’t be taken as a slight because, really, tracking algorithm research completely would be like several full-time jobs just in itself. To talk about algorithms, we need to talk about problems. Image: Zach Copley/Flickr Problem: Bitcoin Is Volatile The global currency market is already an unsettled locale—a 24-hour trading world with relatively few rules, yet governed by big banks with big sums of money. Bitcoin is like a parody of the currency market, where rates are driven mostly by speculation rather than much of anything in the real-world. Image: MIT Problem: Robots Move Like Robots Image: NASA