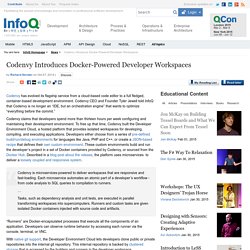 Codenvy CEO and Founder Tyler Jewell told InfoQ that Codenvy is no longer an “IDE, but an orchestration engine” that wants to optimize “everything before the commit.” Codenvy claims that developers spend more than thirteen hours per week configuring and maintaining their development environment. To free up that time, Codenvy built the Developer Environment Cloud, a hosted platform that provides isolated workspaces for developing, compiling, and executing applications. Developers either choose from a series of pre-defined build/run/debug environments for languages like Java, PHP and C++, or create a JSON-based recipe that defines their own custom environment. These custom environments build and run the developer’s project in a set of Docker containers provided by Codenvy, or sourced from the Docker Hub. DockerCon video: Docker at Spotify by Rohan Singh. Chapter 10. Web Application Quickstart. Test Driven Development (TDD): Best Practices Using Java Examples.

In the previous article Test Driven Development (TDD): Example Walkthrough an example of TDD was given. 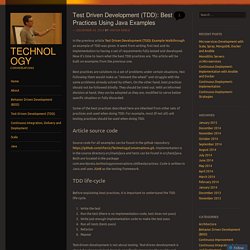 It went from writing first test and its implementation to having a set of requirements fully tested and developed. Now it’s time to learn what the best TDD practices are. This article will be built on examples from the previous one. Best practices are solutions to a set of problems under certain situations. Not following them would make us “reinvent the wheel” and struggle with the same problems already solved by others. Some of the best practices described here are inherited from other sets of practices and used when doing TDD. Source code for all examples can be found in the github repository Implementation is in the source directory src/main/java and tests can be found in src/test/java.

Before explaining best practices, it is important to understand the TDD life-cycle. Test-driven development is not about testing. Practices have been separated into following categories: Processes. Mockito - simpler & better mocking - Google Project Hosting. 06-10-2012: Mockito 1.9.5 released! 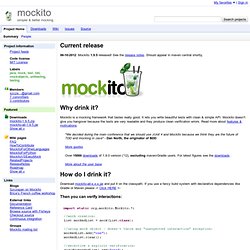 See the release notes. Should appear in maven central shortly. Mockito is a mocking framework that tastes really good. It lets you write beautiful tests with clean & simple API. Mockito doesn't give you hangover because the tests are very readable and they produce clean verification errors. "We decided during the main conference that we should use JUnit 4 and Mockito because we think they are the future of TDD and mocking in Java" - Dan North, the originator of BDD More quotes Over 15000 downloads of 1.9.0 version ('12), excluding maven/Gradle users.

More about the user base Download mockito-all-x.x.x.jar and put it on the classpath. Then you can verify interactions: Or stub method calls Click here for more documentation and examples. If you have any suggestions, find documentation unclear or you found a bug, write to our mailing list. Mockito is served to you by Szczepan Faber and friends. Thanks to YourKit for the profiler! Continuous Integration. I vividly remember one of my first sightings of a large software project. 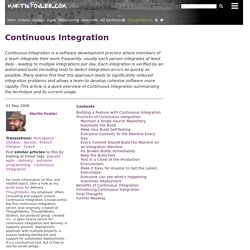 I was taking a summer internship at a large English electronics company. My manager, part of the QA group, gave me a tour of a site and we entered a huge depressing warehouse stacked full with cubes. I was told that this project had been in development for a couple of years and was currently integrating, and had been integrating for several months. My guide told me that nobody really knew how long it would take to finish integrating. From this I learned a common story of software projects: integration is a long and unpredictable process. But this needn't be the way. This contrast isn't the result of an expensive and complex tool. When I've described this practice to people, I commonly find two reactions: "it can't work (here)" and "doing it won't make much difference". The term 'Continuous Integration' originated with the Extreme Programming development process, as one of its original twelve practices. ContinuousDelivery.

Delivery · version control · continuous integration tags: Continuous Delivery is a software development discipline where you build software in such a way that the software can be released to production at any time. 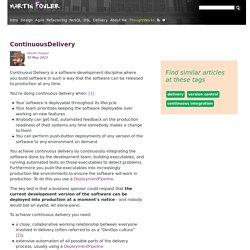 You’re doing continuous delivery when: [1] Your software is deployable throughout its lifecycle Your team prioritizes keeping the software deployable over working on new features Anybody can get fast, automated feedback on the production readiness of their systems any time somebody makes a change to them You can perform push-button deployments of any version of the software to any environment on demand You achieve continuous delivery by continuously integrating the software done by the development team, building executables, and running automated tests on those executables to detect problems.

To achieve continuous delivery you need: a close, collaborative working relationship between everyone involved in delivery (often referred to as a "DevOps culture" [2]).