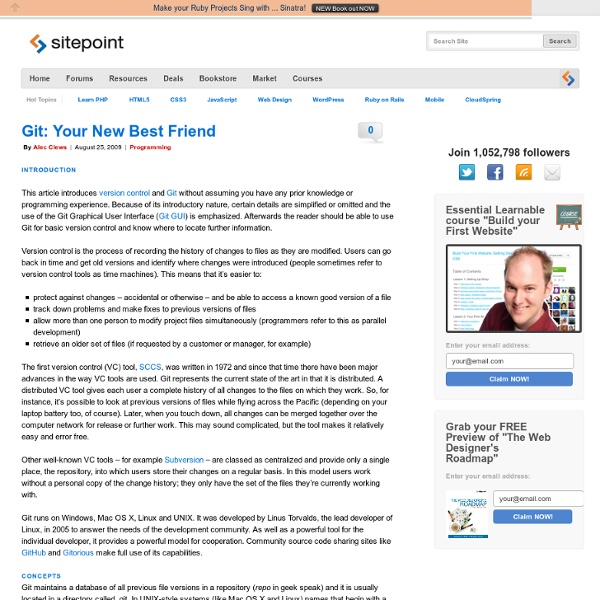 Introduction This article introduces version control and Git without assuming you have any prior knowledge or programming experience. Because of its introductory nature, certain details are simplified or omitted and the use of the Git Graphical User Interface (Git GUI) is emphasized. Afterwards the reader should be able to use Git for basic version control and know where to locate further information. Version control is the process of recording the history of changes to files as they are modified. Users can go back in time and get old versions and identify where changes were introduced (people sometimes refer to version control tools as time machines). The first version control (VC) tool, SCCS, was written in 1972 and since that time there have been major advances in the way VC tools are used. Other well-known VC tools – for example Subversion – are classed as centralized and provide only a single place, the repository, into which users store their changes on a regular basis. Concepts <!

Get Started with Git If you’re a designer or developer, you’ve probably heard about Git, and you might know that it has become immensely popular, especially among the open source community. Though it may seem cryptic at first, this version control system could change the way you work with text, whether you’re writing code, or a novel. Article Continues Below This article covers why version control is important, how to install the Git version control system, and how to get started with your first repository. Why do I need version control? While it may be obvious that large development teams should have sophisticated code-management systems to track releases and bugs, and to avoid stepping on each others’ toes, it might not be immediately clear why individuals would need version control—especially designers or writers. But take a look at a site like Wikipedia, which is built around collaborative user content editing. With Git, though, you can do much more. No more circus file naming#section2 It’s working!

The Perfect Workflow, with Git, GitHub, and SSH In this lesson, we'll focus on workflow. More specifically, we'll use the helpful GitHub service hooks to automatically update a project on our personal server whenever we push updates to a GitHub repo. Prefer a Video Tutorial? Press the HD for a clearer picture. Step 1 - Create a Git Repo We certainly need some sort of project to play around with, right? With our test directory in place, let's create our first Git commit. If you're unfamiliar with Git, I highly recommend that you first review "Easy Version Control with Git." Open the command line: Those familiar with Git should feel right at home. Step 2 - Uploading to GitHub The next step is to upload our project to GitHub. Again, if you're not familiar with GitHub, and haven't yet created an account, read Terminal, Git, and GitHub for the Rest of Us. Begin by creating a new Git repository. Next, you'll need to fill in some details about your project. And finally, since we're already working with an existing Git repo, we only need to run: