The 3 Questions People Always Forget to Ask in an Interview 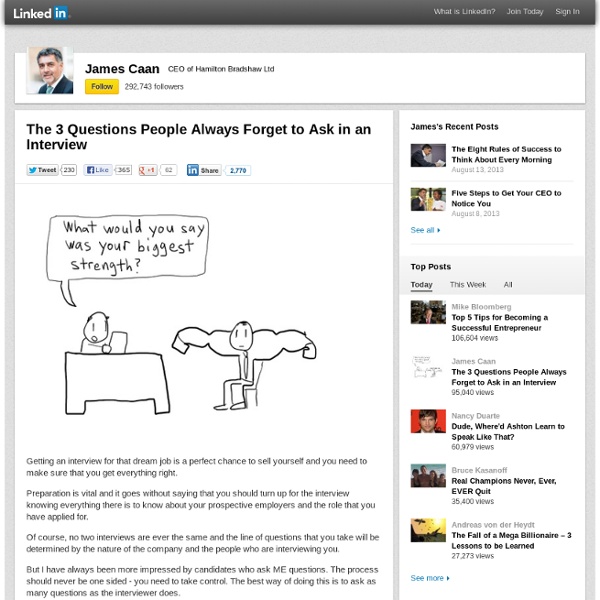 The Best Answers to Tough Interview Questions The Best Answers to Tough Interview Questions Tell me about yourself. This is really more of a request than a question. But these few words can put you on the spot in a way no question can. Many quickly lose control of the interview during the most critical time- the first five minutes. "I was born in and attended . This response sets a nice tone for starting the interview. Repeat Key Accomplishment Statements Throughout the interview you will be asked numerous questions about your attitude and ability to do the job. Where do you see yourself five years from now? This open-ended question is one of the most difficult and stressful ones job seekers face. "In five years I hope to be working with an employer in an increasingly responsible position, that enables me to utilize my talents and work closely with my colleagues in solving important problems. Do not indicate that you hope to start your own business, change careers, or go back to school. Be careful here. We all have weaknesses.

Hiring & Recruiting | The Best Way to Test a Job Candidate Go ahead. Ask another interview question. Or, instead, do this. Margaret Heffernan is an entrepreneur and author. Priya Advani: How Random Acts of Kindness Can Benefit Your Health My daughter and I were on our way back to our apartment when she suddenly slipped on wet concrete in the garage. She would be confined to a wheelchair and crutches for the next several weeks. A week before her fall, I had severely sprained my left shoulder. I wasn’t able to get her wheelchair into or out of my car without assistance. For weeks, I had to ask random people to help me. I was incredibly touched by how everyone was so helpful, without any hesitation. I know how happy I feel when I get the chance to help others, and by the display of kindness that I received, it seemed that others felt the same way. Research reveals that doing good deeds, or kind acts, can make socially-anxious people feel better. “People who engage in kind acts become happier over time,” says Sonja Lyubomirsky, Ph.D., a professor of psychology at the University of California, Riverside. According to Dr. The moral of the story is to be kind and do kind acts for others. References:

Legal Challenges Related To Crowdfunding, Volume 1 Editor's note: This is a guest post by Antti Hemmilä from Attorneys at law Borenius. While crowdfunding is not a new concept, it is getting a lot of media attention nowadays. Crowdfunding is evolving and new crowdfunding platforms provide an excellent tool for financing different projects, whether these are art projects, game or hardware/device development or even equity financing. Lessons learned - How to plan your (non-equity) crowdfunding campaign to comply with Finnish law The crowdfunded book campaign by Senja Larsen has sparked a lot of controversy in Finland in the past few weeks (if you don’t know Senja's case, you can google all about it). The magic word when considering legality of crowdfunding campaign is consideration. If you want to run a crowdfunding project safely within the Finnish fundraising regulation, you need to design it as a pre-order scheme for physical or digital products and be very specific about the nature of the project. Antti Hemmilä inShare

The 7 Sleeper Features of an Effective Cover Letter Everyone knows that a cover letter can make or break your chance of being considered for a position. It shouldn't. It's intended to lead the employer to review your résumé and provide additional information to be considered for the job. So what do hiring managers want to see in a cover letter? 1. A great first sentence. Starting your cover letter with something like, "Congratulations on your recent award," MacLean-Hoover says, "demonstrates familiarity with the employer, making it clear the candidate has done his or her homework." MacLean-Hoover, who helps job applicants determine why they don't hear back from all the résumés they send out, stresses the importance of tailoring that first sentence to the person or the company. 2. 3. 4. 5.

How to Conduct the Perfect Job Interview The stakes are simply too high for anything less. Here's your complete guide to interviewing the right way. Jeff Haden learned much of what he knows about business and technology as he worked his way up in the manufacturing industry. The Brainstorming Tweak: How to Boost Creativity in Groups Traditional brainstorming is inefficient but the process can be tweaked to produce more high quality ideas. For many years brainstorming has been a very popular way for groups to generate new ideas, especially in business. This is despite the fact that many studies have shown that groups actually produce fewer and less creative solutions than people working on their own. This was confusing: we are used to thinking that ‘many hands make light work’, and ‘two heads are better than one’. The research showed, though, that many hands and heads made people nervous, lazy and blocked (for a more in-depth discussion see: Brainstorming Reloaded). In fact people perform better on their own at coming up with new ideas than in a brainstorming group. This is highly perplexing. Now what’s emerging from the productivity research is that brainstorming is a good technique, but it needs a little tweaking. On top of this it solves some of the problems with face-to-face brainstorming.

'Dropbox' Is Taking Over The World BEFORE Apple launched iCloud in 2011, Steve Jobs allegedly offered to buy Dropbox, a file-sharing service founded in 2007, for $800m. When Dropbox declined, Apple's late boss disparaged it as a feature, not a company. Soon after, Dropbox raised $250m, putting its value at over $4 billion. In December Dropbox concluded a promotional campaign that, in just a few weeks, added 2m new users, bringing the total to over 100m, roughly double the number when Jobs made his comment. Dropbox dominates online file-sharing. Most of them use the free version of the service. Dropbox relies on individuals and small firms, for whom its rudimentary security features are good enough; bigger businesses with sensitive information prefer more secure services like Box.net. Google and Microsoft clouds emulate Dropbox in these respects. Dropbox is also striving to make itself the default choice for smartphone users. A bigger long-term worry is the plummeting price of digital storage.

4 Interview Questions That Get to the Heart of a Candidate’s Potential Hiring new employees is an opportunity, but it’s also a huge risk. So perfecting your interviewing skills is critical. But what kind of interview questions are most effective at helping you find an employee with the right skills and experience, and the best fit for your company culture? The most successful interviews are based on facts, and these are usually best gleaned via the behavioral interview technique. As in life, actions and (in this case) past actions, speak louder than words. Some of the best recommendations I’ve seen for conducting fact-based, behavioral interviews (and we’re not talking psychoanalysis here) come from Jeff Haden, a bestselling business writer and contributor to Inc. 1. Interpersonal skills as well as ability to deal with conflict are critical in any small business. Look out for a candidate who blames the other person and takes no accountability for the conflict on themselves. 2. If you get no answer – consider it a warning sign! 3. 4. The Bottom Line

Women talk three times as much as men, says study By FIONA MACRAE Last updated at 13:39 28 November 2006 It is something one half of the population has long suspected - and the other half always vocally denied. In fact, women talk almost three times as much as men, with the average woman chalking up 20,000 words in a day - 13,000 more than the average man. Read more... • Heels on wheels as Paris takes Lindsay and Britney out for a spin • Women spend eight years of their life shopping • Transformed in 40 weeks, woman with a new face Women also speak more quickly, devote more brainpower to chit-chat - and actually get a buzz out of hearing their own voices, a new book suggests. The book - written by a female psychiatrist - says that inherent differences between the male and female brain explain why women are naturally more talkative than men. In The Female Mind, Dr Luan Brizendine says women devote more brain cells to talking than men. The areas responsible for communication, emotion and memory are all pared back the unborn baby boy.

How To Become Valuable To A Start Up (If You’re Not An Engineer) For all the glamor and noble intentions attributed to start-ups, working at an early-stage technology start-up isn’t fundamentally dissimilar from working at an established technology company. Products are built, released, iterated upon based on customer feedback, and the cycle is repeated. And while I don’t think I’d ever want to trade in jeans and a t-shirt for slacks and a button-down, I know I could probably get a job at GeneriCorp, the company that makes automated accounting process optimization software for mid-sized wastewater treatment plants, and not feel totally out of place. One key distinction does exist between life at an early-stage technology start-up and at an established technology company, though: diversity of workload. These ancillary duties almost always involve coding, because a technology start-up is driven by software engineering. Marketing is perhaps the field to which programming knowledge provides the most benefit (but is most often glossed over). inShare