Making best use of exam questions. I have written before about Diagnostic Questions. 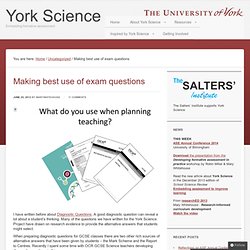 A good diagnostic question can reveal a lot about a student’s thinking. Many of the questions we have written for the York Science Project have drawn on research evidence to provide the alternative answers that students might select. When preparing diagnostic questions for GCSE classes there are two other rich sources of alternative answers that have been given by students – the Mark Scheme and the Report to Centres. Recently I spent some time with OCR GCSE Science teachers developing diagnostic questions in this way. Here is an example. This question part of question 2 on the OCR GCSE Science Gateway B711/02 (higher tier paper) in June 2012. In the Report to Centres the Principal Examiner for the paper wrote : “Just less than half the candidates gained the mark…… The most common correct answer was dehydration.

10 tips-voor-het-beantwoorden-van-vragen. Answer the Question Frames. Questioning Toolkit. Essential Questions These are questions which touch our hearts and souls. 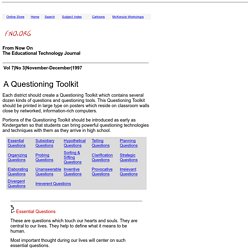 They are central to our lives. They help to define what it means to be human. Most important thought during our lives will center on such essential questions. What does it mean to be a good friend? If we were to draw a cluster diagram of the Questioning Toolkit, Essential Questions would be at the center of all the other types of questions. All the other questions and questioning skills serve the purpose of "casting light upon" or illuminating Essential Questions.

Six Degrees of Kevin Bacon is a parlor game based on the "six degrees of separation" concept, which posits that any two people on Earth are six or fewer acquaintance links apart. 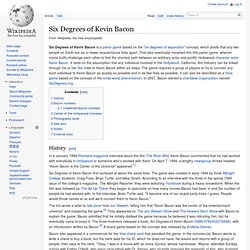 That idea eventually morphed into this parlor game, wherein movie buffs challenge each other to find the shortest path between an arbitrary actor and prolific Hollywood character actor Kevin Bacon. It rests on the assumption that any individual involved in the Hollywood, California, film industry can be linked through his or her film roles to Kevin Bacon within six steps.

The game requires a group of players to try to connect any such individual to Kevin Bacon as quickly as possible and in as few links as possible. It can also be described as a trivia game based on the concept of the small world phenomenon. In 2007, Bacon started a charitable organization named SixDegrees.org. History[edit] The 20%: Questioning Part 2. This is Part Two of a new 2-part blog exploring effective questioning in the classroom. 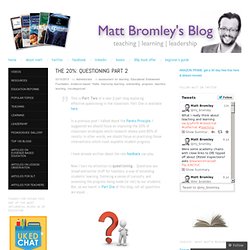 Part One is available here.In a previous post I talked about the Pareto Principle. I suggested we should focus on improving the 20% of classroom strategies which research shows yield 80% of results. In other words, we should focus on practising those interventions which most expedite student progress.I have already written about the role feedback can play.Now I turn my attention to questioning… Questions are bread-and-butter stuff for teachers, a way of extending students’ learning, fostering a sense of curiosity, and assessing the progress being made (or not) by our students. Making best use of exam questions. Thinkers_Keys Bklt.pdf. Questioning. The start of a new term is nearly upon us and I am going in revitalised due to a number of life changes. 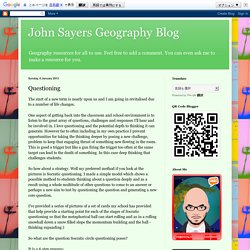 One aspect of getting back into the classroom and school environment is to listen to the great array of questions, challenges and responses I'll hear and be involved in. I love questioning and the potential depth to thinking it can generate. However far to often including in my own practice I prevent opportunities for taking the thinking deeper by posing a new challenge, problem to keep that engaging thrust of something new flowing in the room. This is good a trigger but like a gun firing the trigger too often at the same target can lead to the death of something.

In this case deep thinking that challenges students. So how about a strategy. So what are the question Socratic circle questioning poses? It is a 6 step process: • clarify • challenge assumption • evidence for argument • viewpoints and perspectives • implications and consequences • question the question. Questioning - Top Ten Strategies. “Learn from yesterday, live for today, hope for tomorrow. 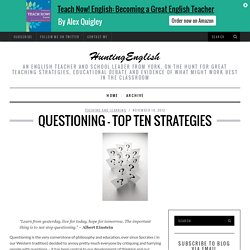 The important thing is to not stop questioning.” – Albert Einstein Questioning is the very cornerstone of philosophy and education, ever since Socrates ( in our Western tradition) decided to annoy pretty much everyone by critiquing and harrying people with questions – it has been central to our development of thinking and our capacity to learn. Indeed, it is so integral to all that we do that it is often overlooked when developing pedagogy – but it as crucial to teaching as air is to breathing. Effective Starters in Maths Lessons. I’ve been experimenting with a few different approaches to starters in lessons recently, prompted by my year 11 groups revision, and thought I would sum up what I’d found. 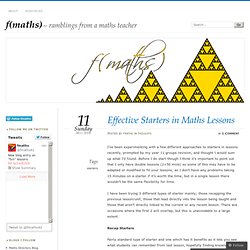 Before I do start though I think it’s important to point out that I only have double lessons (2×50 mins) so some of this may have to be adapted or modified to fit your lessons, as I don’t have any problems taking 15 minutes on a starter if it’s worth the time, but in a single lesson there wouldn’t be the same flexibility for time. I have been trying 3 different types of starter mainly; those recapping the previous lesson/unit, those that lead directly into the lesson being taught and those that aren’t directly linked to the current or any recent lesson. There are occasions where the first 2 will overlap, but this is unavoidable to a large extent.