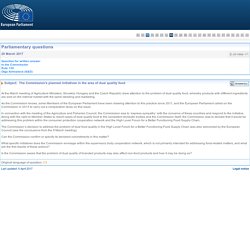 As the Commission knows, some Members of the European Parliament have been drawing attention to this practice since 2011, and the European Parliament called on the Commission in 2013 to carry out a comparative study on this issue. In connection with the meeting of the Agriculture and Fisheries Council, the Commission was to ‘express sympathy’ with the concerns of these countries and respond to the initiative. Along with the calls to Member States to report cases of dual quality food to the competent domestic bodies and the Commission itself, the Commission was to declare that it would be addressing this problem within the consumer protection cooperation network and the High Level Forum for a Better Functioning Food Supply Chain.

PARLEMENT EUROPEEN - Réponse à question E-001582-18 Authorisation by the EU of counterfeit food. The free trade agreements drawn up or being drawn up between the European Union and Canada (CETA), South America (Mercosur) and Japan legalise, for the first time in history, imitations of the most well-known ‘Made in Italy’ food products: from ‘Japanese’ Asiago to ‘Brazilian’ Grana Padano, from fake Parmigiano-Reggiano (‘Parmesan’ and ‘Reggianito’) to Provolone (‘Provoleta’), from ‘Mortadela’ to Fontina, from ‘Japanese’ Gorgonzola to Parma and San Daniele ham. 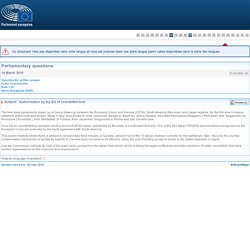 It is a full-on counterfeiting operation worth a record EUR 60 billion, subsidised by Brussels. It is estimated that only 10% of the 291 Italian PDO/PGI denominations recognised by the European Union are protected by the trade agreement with South America. This covers markets where there is already a rampant fake food industry: in Canada, almost 9 out of the 10 Italian cheeses currently on the market are ‘fake’. PARLEMENT EUROPEEN - Réponse à question E-007746/2017 UK requests for assistance from the EU Food Fraud Network. PARLEMENT EUROPEEN - Réponse à question E-002637-16 Protecting public health from illicit substances in foods. Operations Opson V, that is, the police operations of Interpol and Europol in 57 countries around the world which are aimed at identifying and seizing counterfeit or fake foods, have identified over 10 000 tonnes of such foods. 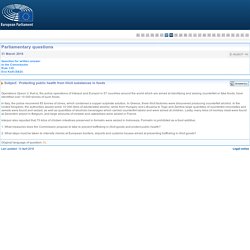 In Italy, the police recovered 85 tonnes of olives, which contained a copper sulphate solution. In Greece, three illicit factories were discovered producing counterfeit alcohol. In the United Kingdom, the authorities seized some 10 000 litres of adulterated alcohol, while from Hungary and Lithuania to Togo and Zambia large quantities of counterfeit chocolates and sweets were found and seized, as well as quantities of alcoholic beverages which carried counterfeit labels and were aimed at children. Lastly, many kilos of monkey meat were found at Zaventem airport in Belgium, and large amounts of crickets and caterpillars were seized in France. 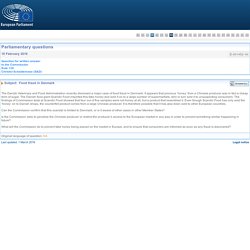 It appears that precious ‘honey’ from a Chinese producer was in fact a cheap form of sugar. The Danish food giant Scandic Food imported this fake honey and sold it on to a large number of supermarkets, who in turn sold it to unsuspecting consumers. The findings of Commission tests at Scandic Food showed that four out of five samples were not honey at all, but a product that resembled it. Even though Scandic Food has only sold the ‘honey’ on to Danish shops, the counterfeit product comes from a large Chinese producer. It is therefore possible that it has also been sold to other European countries. PARLEMENT EUROPEEN - Réponse à question E-007200-16 Violations of food labelling legislation. PARLEMENT EUROPEEN - Réponse à question E-002637-16 Protecting public health from illicit substances in foods. 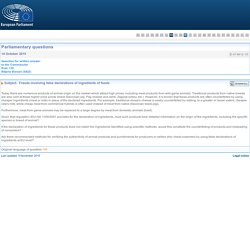 In many Member States there are dealers and producers who promote their products as if they were national or regional products. 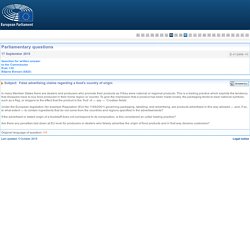 This is a trading practice which exploits the tendency that shoppers have to buy food produced in their home region or country. To give the impression that a product has been made locally, the packaging tends to bear national symbols, such as a flag, or slogans to the effect that the product is the ‘fruit’ of — say — ‘Croatian fields’. Under the European legislation (for example Regulation (EU) No 1169/2001) governing packaging, labelling, and advertising, are products advertised in this way allowed — and, if so, to what extent — to contain ingredients that do not come from the countries and regions specified in the advertisements? If the advertised or stated origin of a foodstuff does not correspond to its composition, is this considered an unfair trading practice? PARLEMENT EUROPEEN - Réponse à question E-010657-15 Food-imitating products — imitation foodstuffs. PARLEMENT EUROPEEN - Réponse à question E-008071-15 Counterfeit foods and safeguarding of intellectual property. 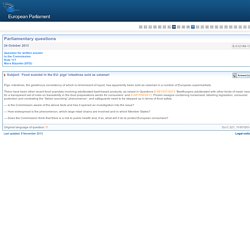 There have been other recent food scandals involving adulterated beef-based products, as raised in Questions E-001557/2013 ‘Beefburgers adulterated with other kinds of meat: need for a transparent set of rules on traceability in the food preparations sector for consumers’ and E-001559/2013 ‘Frozen lasagne containing horsemeat: labelling legislation, consumer protection and combating the “Italian sounding” phenomenon’, and safeguards need to be stepped up in terms of food safety. — Is the Commission aware of the above facts and has it opened an investigation into the issue? — How widespread is the phenomenon, which large retail chains are involved and in which Member States? — Does the Commission think that there is a risk to public health and, if so, what will it do to protect European consumers?

E-005820-13 Food fraud in China. E-006265/2012 Food fraud across the European Union. The FBI and the World Customs Institute have dubbed food fraud the crime of the century, earning perpetrators USD 49 billion annually. 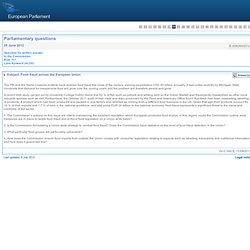 It was noted recently by Michigan State University that demand for inexpensive food will grow over the coming years and the problem will therefore persist and grow. A recent Irish study carried out by University College Dublin found that 82 % of fish such as pollock and whiting sold on the Dublin Market was fraudulently mislabelled as other more valuable species such as cod. Furthermore, the October 2011 audit of Irish meat and diary producers by the Food and Veterinary Office found that there had been misleading labelling of products. E-008465-13 Combating food fraud in the EU. The horse meat scandal greatly affected the European food sector this year. 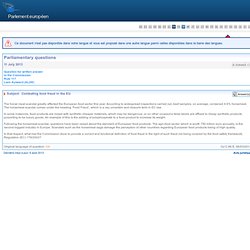 According to widespread inspections carried out, beef samples, on average, contained 4.6% horsemeat. The horsemeat scandal comes under the heading ‘Food Fraud’, which is a vey uncertain and obscure term in EC law. In some instances, food products are mixed with synthetic cheaper materials, which may be dangerous, or on other occasions false labels are affixed to cheap synthetic products purporting to be luxury goods. An example of this is the adding of polyphosphate to a food product to increase its weight.