How Does Akinator Work? Behind The Genie That 'Reads Your Mind' In case you haven't heard of it, Akinator, the Web Genie, is the name of an online game that has gone viral on social media in recent days. 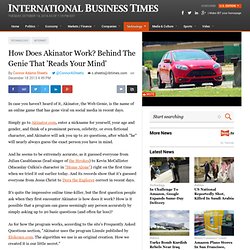 Simply go to Akinator.com, enter a nickname for yourself, your age and gender, and think of a prominent person, celebrity, or even fictional character, and Akinator will ask you up to 20 questions, after which "he" will nearly always guess the exact person you have in mind. And he seems to be extremely accurate, as it guessed everyone from Julian Casablancas (lead singer of the Strokes) to Kevin McCallister (Macaulay Culkin's character in "Home Alone") right on the first time when we tried it out earlier today. And its records show that it's guessed everyone from Jesus Christ to Dora the Explorer correct in recent days. It's quite the impressive online time-killer, but the first question people ask when they first encounter Akinator is how does it work?

But there are some other clues about how Akinator works. How Does the Web Genie Work? Play this game – Akinator Web Genie. 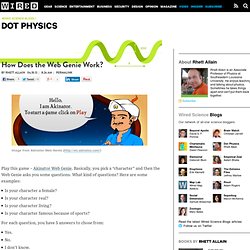 Basically, you pick a “character” and then the Web Genie asks you some questions. What kind of questions? Here are some examples: Is your character a female? Is your character real? For each question, you have 5 answers to chose from: Yes.No.I don’t know.Probably.Probably not. After a certain number of questions, the Genie will guess your character. I sat down with my brother and sister (and some assorted children) and we had a blast.

Our first characters were obvious people. But how does it work? I don’t know. Here is my guess. Real (r): 2Female (f): 2Alive (a): 2Famous from sports (s): 1Walks on 4 legs (l): 1Wears a belt (b): 0 You get the idea. For the example of Kari, this would be 222110. If the Web Genie ask 10 questions and you give 10 responses, that would be one option out of 59,049 options. How would you make your own genie? I think you could start by writing down some famous characters. Actually, this could be fun to do with your friends. How does the web service behind the Akinator work? Round-robin scheduling. Process scheduling[edit] In order to schedule processes fairly, a round-robin scheduler generally employs time-sharing, giving each job a time slot or quantum[2] (its allowance of CPU time), and interrupting the job if it is not completed by then. 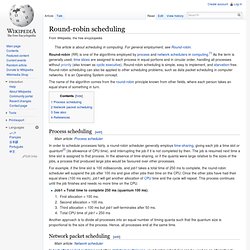 The job is resumed next time a time slot is assigned to that process. In the absence of time-sharing, or if the quanta were large relative to the sizes of the jobs, a process that produced large jobs would be favoured over other processes. For example, if the time slot is 100 milliseconds, and job1 takes a total time of 250 ms to complete, the round-robin scheduler will suspend the job after 100 ms and give other jobs their time on the CPU. Once the other jobs have had their equal share (100 ms each), job1 will get another allocation of CPU time and the cycle will repeat. 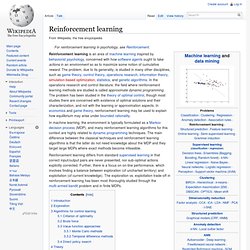 The problem, due to its generality, is studied in many other disciplines, such as game theory, control theory, operations research, information theory, simulation-based optimization, statistics, and genetic algorithms. In the operations research and control literature, the field where reinforcement learning methods are studied is called approximate dynamic programming. Decision tree learning. Decision tree learning uses a decision tree as a predictive model which maps observations about an item to conclusions about the item's target value. 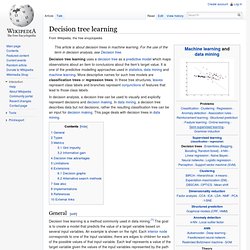 It is one of the predictive modelling approaches used in statistics, data mining and machine learning. More descriptive names for such tree models are classification trees or regression trees. In these tree structures, leaves represent class labels and branches represent conjunctions of features that lead to those class labels. Statistics - What kind of algorithm is behind the Akinator game? Artificial intelligence - How do 20 questions AI algorithms work? Artificial intelligence - Designing a twenty questions algorithm. Open 20 Questions.