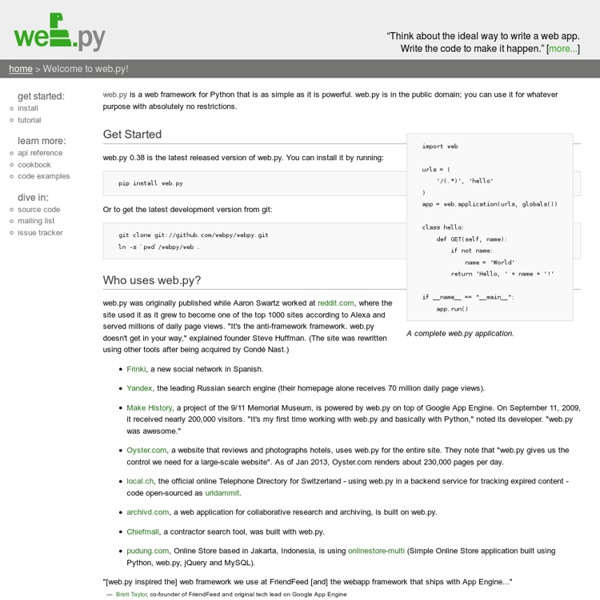 HTML and Javascript Cheat Sheet for Site Designers 53Shares1918132100×53Shares In the past, if you wanted to create a website of your own, you would need to know how to code, design within Adobe Photoshop, upload files through FTP software and then also make sure your site was properly setup to view accordingly in each web browser. Long story short, it was quite the complicated task! Today it’s extremely simple to create a site or blog of your own. However, there are still going to be times when you need to get your hands dirty by messing around with the HTML and coding that makes up your site. Curveship: Interactive Fiction + Interactive Narrating PythonStyleGuide - soc - Style guide for Python code contributed to Melange - Project Hosting on Google Code Melange follows the Google Python Style Guide; this document describes only those respects in which Melange's style differs from what is laid out in that document. The SoC framework, and Melange web applications built upon it, are implemented in Python (it is one of the programming language besides Java and Go which are currently supported by Google App Engine). The Google Python Style Guide and these amendments to it are a list of dos and don'ts for Python contributions to the Melange project. The rules below are not guidelines or recommendations, but strict rules. If you have questions about these guidelines, you can send mail to the developer mailing list. Since this style guide is documented in the Melange wiki, it can be changed via the existing documentation review process. Python Language Rules Imports: Import only modules and only by name (no wildcard imports) Function Arguments: Pass positional arguments positionally and keyword arguments by keyword. Python Style Rules Imports Yes:

Transatlantic Trade and Investment Partnership This article is about the regulation and trade agreement. For the chemical compound abbreviated as TTIP, see Titanium isopropoxide. The Transatlantic Trade and Investment Partnership (TTIP) is a proposed free trade agreement between the European Union and the United States, with the aim of promoting multilateral economic growth.[1] The American government considers the TTIP a companion agreement to the Trans-Pacific Partnership (TPP).[2] After a proposed draft was leaked in March 2014,[3] the European Commission launched a public consultation on a limited set of clauses and in January 2015 published parts of an overview.[4] If an agreement is to be made, it is not expected to be finalized before 2016.[5] European Citizens' Initiative against TTIP and CETA, named "Stop TTIP", has been established, acquiring over 3.2 million signatures within a year.[6][7] Background[edit] Proposed contents[edit] Market access[edit] Services and leaked text[edit] Industry-specific regulation[edit] Hurdles[edit]

Misused mobile UX patterns Misused mobile UX patterns If you are an experienced designer, you probably agree that being inspired by others is not stealing in UI design. It’s best practice research. Some might say that sticking to the guidelines and following others will kill creativity and, at the end of the day, all apps will look the same. 1. At least half million posts have been written about the hamburger menu, mostly by designers, arguing against it. This solution is pretty tempting and convenient for a designer: you don’t have to worry about the limited screen estate, just squeeze your whole navigation into a scrollable overlay that is hidden by default. Experiments show, however, that exposing menu options in a more visible way increases engagement, user satisfaction and even revenue. If your navigation is complex, hiding it does not make it mobile friendly. 2. Due to the limited screen estate, it also seems a no brainer to save space by replacing text labels with icons wherever possible. 3. 4. 5.

SciPy These are instructions for installing the full SciPy stack. For installing individual packages, such as NumPy and SciPy, see Individual binary and source packages below. Scientific Python distributions For most users, especially on Windows and Mac, the easiest way to install the packages of the SciPy stack is to download one of these Python distributions, which includes all the key packages: Anaconda: A free distribution for the SciPy stack. Supports Linux, Windows and Mac.Enthought Canopy: The free and commercial versions include the core SciPy stack packages. Linux packages Users on Linux can quickly install the necessary packages from repositories. Ubuntu & Debian sudo apt-get install python-numpy python-scipy python-matplotlib ipython ipython-notebook python-pandas python-sympy python-nose The versions in Ubuntu 12.10 and Debian 7.0 meet the current SciPy stack specification. Fedora sudo yum install numpy scipy python-matplotlib ipython python-pandas sympy python-nose Gentoo Mac packages

The Hitchhikers Guide to Python! — pythonguide 0.0.1 documentation Greetings, Earthling! Welcome to The Hitchhiker’s Guide to Python. This is a living, breathing guide. If you’d like to contribute, fork us on GitHub! This handcrafted guide exists to provide both novice and expert Python developers a best practice handbook to the installation, configuration, and usage of Python on a daily basis. This guide is opinionated in a way that is almost, but not quite, entirely unlike Python’s official documentation. Note The use of Python 3 is highly preferred over Python 2. Let’s get started! Getting Started with Python New to Python? Properly Install Python on your system: Using Virtualenvs with Pipenv: Python Development Environments This part of the guide focus on the Python development environment, and the best-practice tools that are available for writing Python code. Writing Great Python Code This part of the guide focuses on the best-practices for writing Python code. Scenario Guide for Python Applications Shipping Great Python Code Additional Notes

The National Security Archive programmer's trouble RPyC: Unbounded Computing RPyC (pronounced as are-pie-see), or Remote Python Call, is a transparentpython library for symmetricalremote procedure calls, clustering and distributed-computing. RPyC makes use of object-proxying, a technique that employs python’s dynamic nature, to overcome the physical boundaries between processes and computers, so that remote objects can be manipulated as if they were local. A screenshot of a Windows client connecting to a Linux server. Getting Started Installing RPyC is as easy as pip install rpyc. If you’re new to RPyC, be sure to check out the Tutorial and Screen Casts. For an introductory reading, David Mertz wrote a very thorough Charming Python installment about RPyC, explaining how it’s different from existing alternatives (Pyro, XMLRPC, etc.), what roles it can play, and even show-cases some key features of RPyC (like the security model, remote monkey-patching, or remote resource utilization). Features Use Cases

Python Programming Language – Official Website City-Data.com - Stats about all US cities - real estate, relocation info, crime, house prices, cost of living, races, home value estimator, recent sales, income, photos, schools, maps, weather, neighborhoods, and more How we ended up with microservices. Microservices are a thing these days. When I was at SoundCloud, I was responsible for the migration from a monolithic Ruby on Rails application to a constellation of microservices. I’ve told the technical side of this story multiple times, both in presentations, and as a multi-part series for SoundCloud’s engineering blog. I am sorry to disappoint my fellow techies, but the reason we migrated to microservices had to do much more with productivity than pure technical matters. Note: This post definitely has a lot of revisionism, and, in trying to make it easier to understand, oversimplifies a fairly chaotic chain of events into a linear timeline. The Next project When I first joined the company, the most important project we had at play was what we internally called v2. I first joined the back-end team, the App team. These two teams, App and Web, were really isolated—we even lived in separate buildings across Berlin. But somehow there was a lot of frustration in the air. Process hacking

Related:
Related:  i have questions and needs