Flat UI Design - A showcase of the best examples of the flat UI design aesthetic on the web. 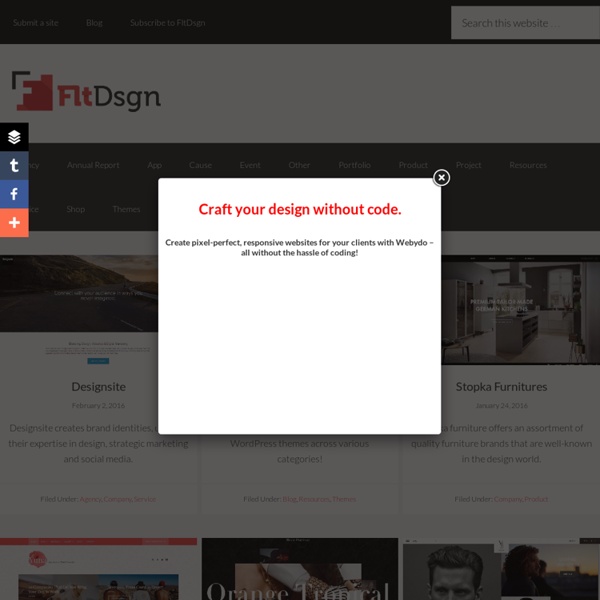 Popup Vex is a modern dialog library which is highly configurable, easily stylable, and gets out of the way. You’ll love vex because it’s tiny (6kb minified, 2kb minifed + gzipped), has a clear and simple API, works on mobile devices, and can be customized to match your style in seconds. It supports built in CSS spinner for asynchronous dialogs. You can open multiple dialogs at once and close them individually or all at once. It has been tested on IE8+, Firefox 4+, Current WebKit (Chrome, Safari), Opera. Using Custom Data Attributes and Pseudo-Elements A tutorial on how to (ab)use custom data attributes and pseudo-elements for creating image captions. In today’s tutorial I want to show you some simple CSS tricks using data attributes and pseudo-elements. The aim is to create an image caption using only an anchor and an image as markup. We’ll be exploring how to create pseudo-elements from some data attribute values and use them in a hover effect or simply show them next to the image. Using (more) semantic markup is of course what you should be doing, especially for data that is important to be shown. But this is a mere exercise for learning how to use those properties and how to create some nice effects.

Tech & ALL – Web Magazine for Web Designers and Developers I’m not really big on UI, and it seem like all has been made already, especially Flat Color UI’s, but I gave this a shot, I’m still using some flat colors with gradient effect, you can check out the full size preview below along with the .PSD download link. What’s included: - Sync tab - Download Tab - Mp3 player - Watch/Date - Desktop Tool Kit - BlueTooth Control - Video Player - Weather Widget - Photo Gallery

Group and Display Data with Underscore and AngularJS Let’s use the following data to simulate information you might receive from an HTTP API: Using underscore.js, it is easy to group the objects by their department attribute. Now $scope.groups will look like the following: One way to get the data onto the screen is to use an ngRepeater, but the most popular expression form for the repeater (”variable in expression”) doesn’t exactly give us what we want.