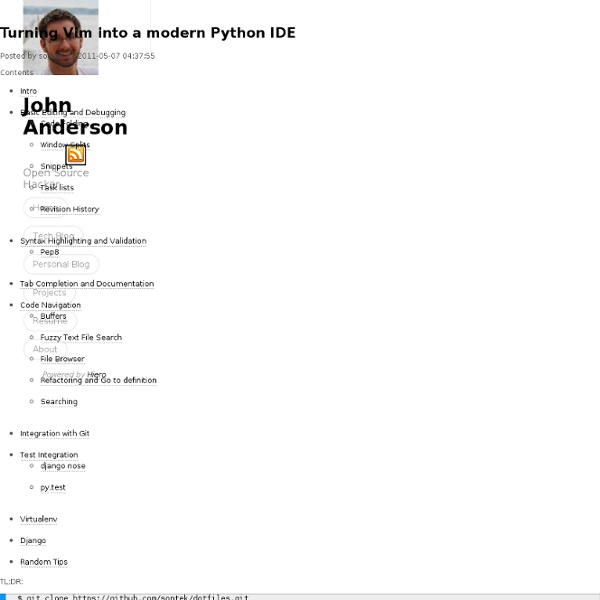 $ git clone $ cd dotfiles $ ./install.sh vim Download PDF Version Back in 2008, I wrote the article Python with a modular IDE (Vim). Years later, I have people e-mailing me and commenting daily asking for more information, even though most of the information in it is outdated. Because one of the most important parts about a development environment is the ability to easily reproduce across machines, we are going to store our vim configuration in git: $ mkdir ~/.vim/ $ mkdir ~/.vim/{autoload,bundle} $ cd ~/.vim/ $ git init The purpose of the autoload directory is to automatically load the vim plugin Pathogen, which we'll then use to load all other plugins that are located in the bundle directory. You'll need to add the following to your ~/.vimrc so that pathogen will be loaded properly. filetype off call pathogen#runtime_append_all_bundles() call pathogen#helptags() Now lets add all of the vim plugins we plan on using as submodules to our git repository:

Revenge of the Nerds May 2002 In the software business there is an ongoing struggle between the pointy-headed academics, and another equally formidable force, the pointy-haired bosses. Everyone knows who the pointy-haired boss is, right? The pointy-haired boss miraculously combines two qualities that are common by themselves, but rarely seen together: (a) he knows nothing whatsoever about technology, and (b) he has very strong opinions about it. Suppose, for example, you need to write a piece of software. Why does he think this? Well, this doesn't sound that unreasonable. But all languages are not equivalent, and I think I can prove this to you without even getting into the differences between them. Presumably, if you create a new language, it's because you think it's better in some way than what people already had. So, who's right? Once you start considering this question, you have opened a real can of worms. The disadvantage of believing that all programming languages are equivalent is that it's not true.

Why The New Guy Can’t Code We’ve all lived the nightmare. A new developer shows up at work, and you try to be welcoming, but he1 can’t seem to get up to speed; the questions he asks reveal basic ignorance; and his work, when it finally emerges, is so kludgey that it ultimately must be rewritten from scratch by more competent people. And yet his interviewers—and/or the HR department, if your company has been infested by that bureaucratic parasite—swear that they only hire above-average/A-level/top-1% people. It’s a big problem, especially now. Like many of the hangovers that haunt modern software engineering, this is ultimately mostly Microsoft’s fault.2 Back when they were the evil empire where everyone secretly wanted to work, they were famous for their “brain-teaser” interview questions – Why are manhole covers round? Everyone wanted to be like Microsoft, even Google, until everyone wanted to be like Google (until recently); and so that interview meme persisted. Actually it’s worse than that.