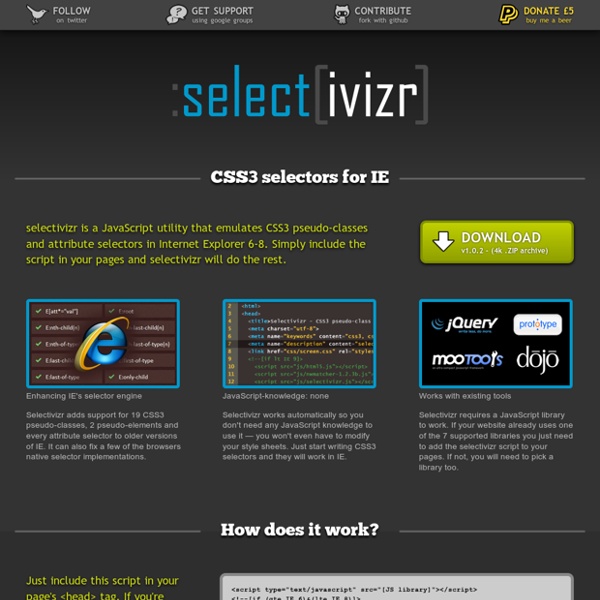 Works with existing tools Selectivizr requires a JavaScript library to work. If your website already uses one of the 7 supported libraries you just need to add the selectivizr script to your pages. If not, you will need to pick a library too. Selectivizr will automatically detect the best JavaScript library for the job. If you're already using a library and it doesn't support the selectors you need - just include another one. Style sheets MUST be added to the page using a <link> tag but you can still use @import in your style sheets.

Useful :nth-child Recipes Share this: Ship custom analytics today with Keen.io. I get a little giddy when I come across perfect uses for :nth-child or :nth-of-type (read about the difference). The better you understand them, the more css nerdgasms you get to have! In these simple "recipes" (really: expressions) I'll arbitrarily use a flat list of list items and randomly chosen numbers. But it should be fairly obvious how to alter them to get similar selections.

Reboot, Resets, and Reasoning By Chris Coyier On reset I saw in an article by Nicholas Cerminara the other day (careful visiting that link, looks like they have some tracking scripts run wild) that Bootstrap 4 has a new CSS reset baked in they are calling Reboot: Reboot, a collection of element-specific CSS changes in a single file, kickstart Bootstrap to provide an elegant, consistent, and simple baseline to build upon.

Smart Fixed Navigation A fixed navigation that allows your users to access the menu at any time while they are experiencing your website. It's smaller than a full-width fixed header, and replaces the back-to-top button with a smarter UX solution. Browser support ie Chrome Firefox Safari Opera 9+ Web pages with a lot of content require a quick way for the user to get back to the top, where the navigation is (most of the time). Hence the old back-to-top button.

Beginner Concepts: How CSS Selectors Work Share this: monday.com helps you manage your projects. Are you new to CSS? This article is for you! Perhaps the biggest key to understanding CSS is understanding selectors. Selectors are what allows you to target specific HTML elements and apply style to them. Top 5 CSS Tools for Web Developers and Designers CSS has come a long way, but the tooling around it hasn’t until now. If you feel that writing CSS is like fighting monsters in a tar pit, you’re not alone. While CSS is one of the most fundamental technologies powering the Web, it’s not a proper programming language or framework per se. As a result, as soon as your project starts growing more prominent, so does the mess — the selector rules seem to be all over the place, and it’s hard to find what’s where; as you include fonts, external CSS, JS, and other assets on your pages, the final size of the bundle seems to grow out of hand, and you wonder where the ideals of fast, user-friendly front-ends got lost.

Developing Responsive Designs With Opera Mobile Emulator Advertisement This is our seventh article in a series that introduces useful and freely available tools and techniques, developed and released by active members of the Web design community. The first article covered PrefixFree; the second introduced Foundation, a responsive framework; the third presented Sisyphus.js, a library for Gmail-like client-side drafts. The fourth shared a free plugin called GuideGuide with us, and later we’ve announced Erskine’s responsive grid generator Gridpak and Remy Sharp’s debugging tool JS Bin. Back in 2009, when coding version 10 of Opera Mobile, my Opera colleagues decided to tune the Opera Mobile build machine so that it would churn out builds not only for common mobile platforms, but for Windows and Linux as well. So, we decided to iron out the wrinkly bits, added a Mac build channel, and turned it into a publicly available developer tool, called Opera Mobile Emulator.

CSS Specificity Wars This entry was published on October 7th 2005 and, incredibly, is still one of the most visited pages on my website, so twelve years later I decided to update it with a new graphic to print and pin near your monitor. If you find this useful, consider saying “thank you” with a small donation. Join me, and together we can rule the galaxy as father and geeks!