Category Theory for Programmers: The Preface –   Bartosz Milewski's Programming Cafe. Part One Part Two Part Three There is a free pdf version of this book with nicer typesetting available for download. 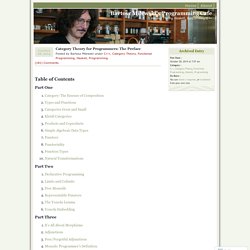 You may order a hard-cover version with color illustrations at Blurb. Or you may watch me teaching this material to a live audience. For some time now I’ve been floating the idea of writing a book about category theory that would be targeted at programmers. I will attempt, in the space of a few paragraphs, to convince you that this book is written for you, and whatever objections you might have to learning one of the most abstract branches of mathematics in your “copious spare time” are totally unfounded. My optimism is based on several observations. Second, there are many different kinds of math, and they appeal to different audiences. Composition is at the very root of category theory — it’s part of the definition of the category itself.

Third, I have a secret weapon, a butcher’s knife, with which I will butcher math to make it more palatable to programmers. Software Foundations. How to Install and Configure Kubernetes and Docker on Ubuntu 18.04 LTS. Kubernetes is an open source platform for managing containerized applications. 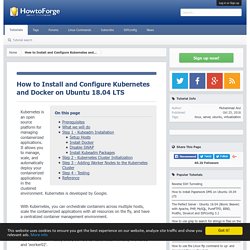 It allows you to manage, scale, and automatically deploy your containerized applications in the clustered environment. Kubernetes is developed by Google. With Kubernetes, you can orchestrate containers across multiple hosts, scale the containerized applications with all resources on the fly, and have a centralized container management environment. In this tutorial, I will show you step-by-step how to install and configure Kubernetes on Ubuntu 18.04. We will be using 1 server 'k8s-master' as the Kubernetes Host Master, and 2 servers as Kubernetes workers, 'worker01' and 'worker02'. Prerequisites 3 Ubuntu Servers10.0.15.10 k8s-master10.0.15.21 worker0110.0.15.22 worker02Root privileges What we will do Kubeadm InstallationSetup HostsInstall DockerDisable SWAPInstall Kubeadm PackagesKubernetes Cluster InitializationAdding Worker Nodes to the Kubernetes ClusterTesting Step 1 - Kubeadm Installation Setup Hosts Disable SWAP.

Functional Programming in Python – Marco Bonzanini. This is probably not the newest of the topics, but I haven’t had the chance to dig into it before, so here we go. 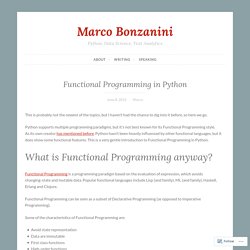 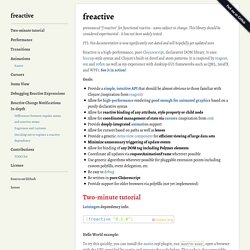 This library should be considered experimental - it has not been widely tested. FYI: this documentation is now significantly out-dated and will hopefully get updated soon freactive is a high-performance, pure Clojurescript, declarative DOM library. It uses hiccup-style syntax and Clojure's built-in deref and atom patterns.

It is inspired by reagent, om and reflex (as well as my experience with desktop GUI frameworks such as QML, JavaFX and WPF). Goals: Two-minute tutorial Leiningen dependency info: Hello World example: To try this quickly, you can install the austin repl plugin, run austin-exec, open a browser with the URL provided by austin and execute the code below. Explanation: If you already understand hiccup syntax and Clojure's atom, you're 90% of the way to understanding freactive. freactive's syntax is very similar to that of reagent with a few small differences.