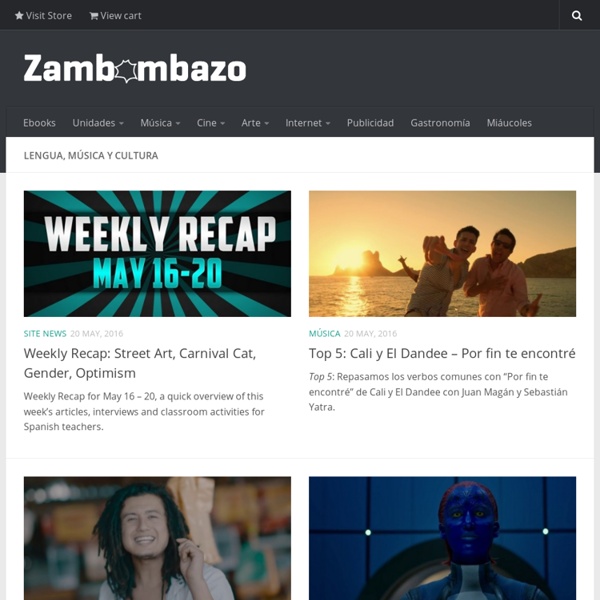 Digital immersion creates wave of change in language education SmartBlogs To instruct or not to instruct has been a source of controversy in the field of applied linguistics since Krashen first introduced his comprehensible input theory in the 1980s. The debate over the utility of explicitly learned knowledge in language learning has come full circle again thanks to a new crop of digital immersion platforms, including Duolingo, Lingua.ly and Bliu Bliu. These platforms skip the grammar and go straight for the good stuff: target language content from the Internet.The world of language education has seen several waves of change over the past two decades, not least the abandonment of the audio-lingual method in favor of communicative language teaching and the advent of language software with interactive exercises and extensive stores of content, but a new generation of digital tools is now coming to the forefront to change the game yet again.

Singing Latino: 12 Popular English Songs in Spanish There are many songs that become popular and then make a crossover to other languages. Some turn out to be good, but others are a complete disaster. I assume that translating a hit song to a different language is difficult. Think about the challenge of keeping the essence of the original lyrics yet finding the appropriate words to fit in the melody… that takes some in-depth language skills! That is why both versions do not have the exact same translation. Here is a playlist of 12 Spanish versions of popular English songs (and a Bonus Track in Spanglish). 11th Gr. IB Spanish 4 - Señor Sullivan's Spanish Classes & Spanish Club The primary goal of both IB Spanish 4 (11th grade) and IB Spanish 5 (12th grade) is to help students be successful on the International Baccalaureate Language B Standard Level examination that begins in January (not May) of the students’ senior year. The integrated practice of the major language skill areas of listening, reading, speaking, and writing will be achieved through individual and cooperative learning activities in conjunction with comprehensive readings of authentic fiction and non-fiction texts and study of the major grammatical conventions manifest in these readings. Students are expected to rise to the expectations of a demanding curriculum by putting into practice the following academic behaviors both in and outside of the classroom: Consistently preparing assignments on time Demonstrating advanced participation and academic skills Managing unforeseen circumstances and complicated situations

Interactive teaching Clock digital,analogue,telling time & angles Introduction The clock activity covers three topics, the first can demonstrate how to tell the time using an analogue clock. The second mode uses the the clock hands as a way of learning angles. The third mode uses the clock as a way to help understand fractions.The clocked can be altered to change colors and its overall styling. Note in this activity different controls are shown depending on the current mode Common Controls 5 New Year’s resolutions for every WL teacher You could probably guess what the most popular New Year’s resolutions are; you’ve probably made them yourself. Get in shape, eat better, save money, quit smoking, volunteer. You could probably also guess many of the popular resolutions for teachers: be more organized, have a positive attitude, involve students more, set goals.

subjunctive One of my problems with standard curriculum is they can’t provide enough variety in activities focused on one issue. They try, I’ll give the writers credit for that, but there are only so many textbook/workbook exercises you can design to elicit subjunctive for doubt. And really, do we believe that those cheesy textbook videos offer enough patterned input for them to understand anything except how bad the acting is? So I don’t use a textbook. My lesson activities include stories, drawings, writing, songs, and, occasionally, a game. 2011 September Browse > Home / Archive: September 2011 Due to popular demand, here is the document you have requested for the Latin American Film Festival. I just ask that if you access the Latin American Film Festival document, you write a quick comment here on my blog and please become a fan of my Facebook Page. Also, I am giving it to you in MS Word form so you can edit it according to your needs. Please remember to give me credit (I inserted my name in the footer). Have a fantastic Spanish Heritage Month!!