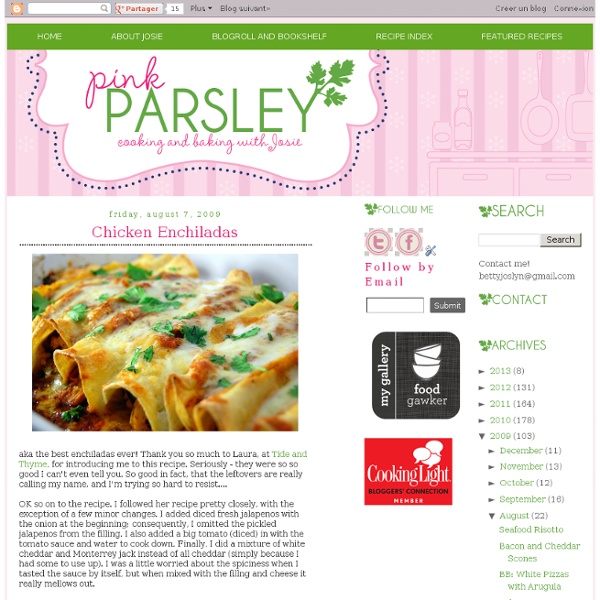 aka the best enchiladas ever! Thank you so much to Laura, at Tide and Thyme, for introducing me to this recipe. Seriously - they were so so good I can't even tell you. So good in fact, that the leftovers are really calling my name, and I'm trying so hard to resist.... OK so on to the recipe. I followed her recipe pretty closely, with the exception of a few minor changes. Seriously, make these ASAP! Chicken Enchiladas with Red Chile Sauceadapted from Tide and Thyme, orginally from America's Test Kitchen Combine the onion, jalapeno, 1/2 teaspoon salt, and oil in a large saucepan. cover and cook over medium-low heat, stirring often, until the onions and peppers have softened, 8-10 minutes. Nestle the chicken into the sauce. Strain the sauce through a strainer into a medium bowl, pressing the onion mixture to extract as much liquid as possible. Shred the chicken into bite-sized pieces. Lightly spray the tops of the enchiladas with cooking spray. Reduce heat to 400.

Oven Roasted Potatoes When I heard this month’s Kitchen Bootcamp Challenge was potatoes, I was pumped. Originally, I had great plans for the sweet potatoes still in my basement from last fall, but after researching and chatting with the hubby, I decided to go with Yukon Gold potatoes instead. My husband isn’t a huge fan of sweet potatoes and I wanted to make something he would enjoy too, so that’s how I settled on this oven roasted potato recipe. Yukon Golds are our favorite potato to grow in the garden and they absolutely melt in your mouth when freshly dug from the garden. But oddly enough, I’ve never actually roasted them in the oven.

Red Chile Enchiladas with Chicken and Melted Cheese I know, I know. Rick Bayless recipes are becoming the new goat cheese recipes on my blog. But, what can I say? When every recipe I’ve tried has been so simple to make and so good, how can I not keep going back to Mexican Everyday? Enchilada Lasagna This is without a doubt my husbands all time favorite dish. I got this recipe from his sister, and made just a few tiny adjustments to it. It is a very mild Mexican dish, and pretty much fail proof. I don't make it often enough though, specially if you ask my hubby. He would like to have it at least once a week.

General Tso’s Chicken This recipe for General Tso's chicken has been the most popular on this site since I first posted it in 2009. Month after month it continues to be the most viewed and searched for recipe here. I love that so many of you, presumably, have visited on a mission to replicate this tasty dish from a favorite take-out. Over the past few months, I've been testing and retesting this recipe for my cookbook, and want to share a new revised version. I've loved all your feedback and incorporated some changes that'll make this General Tso's even better. The sauce, for example, has a couple of new ingredients to round out the tomato base.

Egg Drop New categories for me. I’m filing this under ‘kids‘ and ‘breakfast‘. Not because it’s a specific food for children, but because my baby loves to eat this (will I ever stop calling him my baby? I somehow doubt it). This is by far his favorite breakfast -not to mention he loves to ‘help‘ me cook it – which makes it a fun thing for the both of us. gooseberry mooseberry: Shrimp and Noodle Salad It's been hot. We've had an almost unbearable heatwave last week. And once again cold dishes and salads are my friends. Truth is, I don't remember much of the last month and a half of summer. Save for a few stolen moments. For they do feel like stolen.

Crock Pot Chicken Taco Chili One of my most popular recipes! This is the perfect slow cooker dish because you just dump all the ingredients in, turn it on and come back to the best tasting meal! No prep, super easy, freezes well and the kids love it! We love it over rice, or served in a bowl with multi-grain chips, topped with reduced fat cheddar cheese or avocados. This makes a lot and it is even better the next day for lunch! A great freezer-friendly meal!

Caramel Apple Cheesecake Bars These Caramel Apple Cheesecake Bars are the most popular recipe on my blog and have been pinned over 1 million times. These creamy cheesecake bars start with a shortbread crust, a thick cheesecake layer, and are topped with diced cinnamon apples and a sweet streusel topping. I can’t believe it’s the end of September and I haven’t posted any apple desserts yet. For me, September is all about the apple! I’ve been making this Paula Deen recipe for a couple of years now and they’ve always been good but they always needed a little more cheesecake filling in my opinion to match the thick crust and ample streusel topping. So I increased the cheesecake filling and these are even better than I remember.

Honey Lime Chicken (inspired by Sunset Magazine) Leave it to Sunset Magazine to come up with a variety of delicious marinades to suit any purpose and serve them up in one cool issue (August 2010). Recently I made the two "Perfect for Seafood" marinades - Lemongrass, Chile and Coconut Milk Shrimp and Chile Ginger Shrimp. Both were fantastic, so this time I decided to try the honey lime marinade from the "Perfect for Chicken" section and I was very pleased with the outcome.It doesn't get any easier than this - 5 simple ingredients (not including the salt and pepper), marinade overnight, and throw on the grill. A Two Bite Breakfast: Bacon & Eggs in Toast Cups * Updated post from archive: Originally posted March 29, 2009 If you where to ask me what is my favorite meal of the day without a thought my response would be breakfast! I love breakfast!

Salsa roja (roasted red salsa) « One Particular Kitchen I eat a lot of salsa. A LOT. I am rather notorious for this, in fact. My friend’s boyfriend once innocently asked if I had anything he could snack on — maybe some chips and salsa? My friend nearly fell on the floor laughing at the thought of me not having chips and salsa in the house. There is no risk of that. Grilled Corn, Avocado and Tomato Salad with Honey Lime Dressing When looking for a tasty salad on the Internet I came across this one from Jehan Can Cook. It sounded perfect. I love all the ingredients and flavors used so I was really excited to try it.

Quick & Cheesy Chicken Pot Pie For the longest time my quick, go-to Chicken Pot Pie recipe involved canned cream of chicken soup and a homemade biscuit topping. I’m *trying* to stay away from processed foods and to feed my family more naturally, so I came up with this recipe. Which, in my mind, tastes way better then the original anyways. I simplified it with an even easier biscuit topping, using the homemade bisquick mix that I always keep on hand in my fridge. Tut Tuesday: Lemon Dessert Bowls - The Proper Pinwheel : The Proper Pinwheel What up what up? Did you enjoy your Monday? I sure did. I flew home early in the morning and then just kicked back and watched the rain smother our grass. Just kidding.