80 things we wish we knew before we started traveling - StumbleUpon 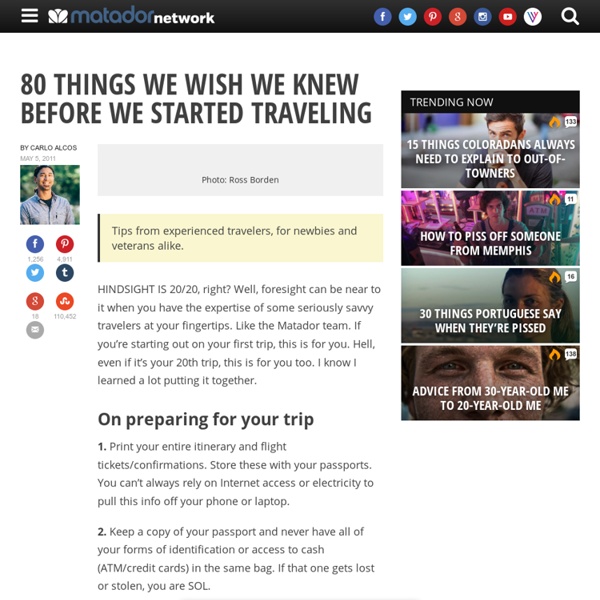 The Universal Packing List - StumbleUpon Wanderlusts China Travel Information and Travel Guide Whether it’s your first visit or your twentieth, China is so big, so diverse and so fast-changing, it’s always an adventure. Breathtaking Antiquity Let’s face it: the world’s oldest continuous civilisation is bound to pull an artefact or two out of its hat. There isn't history at every turn – three decades of perpetual development and socialist town-planning have taken their toll – but travel selectively in China and rich seams of antiquity await exploration. With tumble-down chunks of the Great Wall, mist-wreathed, temple-topped mountains, quaint villages, water towns and sublime Buddhist cave statues, China insists on a few requirements: a well-made pair of travelling shoes and a strong stomach for long-distance wayfaring. Stupendous Scenery Běijīng, Shànghǎi and Hong Kong are portraits of modern Chinese wherewithal and ambition, but it's the big outdoors that should top your list. Cuisine Treat yourself by trading your meagre local Chinatown menu for the lavish Middle Kingdom cookbook.

6 Ways to Travel Endlessly - StumbleUpon Traveling the way most people do it isn’t enough. Saving all year long at a job for just two weeks a year won’t let you see the world the way you want to see it. So you find someone to take care of your stuff while you travel the world. 1. Couch surfers are a huge network of hospitable people who open up their home to fellow travelers and let them stay on their couches (or floor) for free . In turn, the site lets you open up your home to travelers who want to use your couch. Most programs take safety seriously. Sites include: Couchsurfing, Servas, Hospitality Club, BeWelcome 2. All over the world there are amazing houses that people want you to take care of and live in for free. . Caretaker’s Gazette, Mind My House, House Carers 3. (Work Exchange) WWOOF is short for World Wide Opportunities on Organic Farms. . WWOOF is the most well known work exchange program in the world, but there are plenty of other options available. Help Exchange, Workaway 4. (Freelance Work) . 5. . 6.

Pub guide to London pubs and other pubs in the UK. | Fancyapint? - StumbleUpon The Traveller's Medicine Cabinet: 5 Essential Drugs for the Road - StumbleUpon While out roving you aren’t always (or even often) anywhere near a hospital or pharmacy. But, if you pack these nutritional supplements and natural medications wherever you go, you’ll be able to cope just fine. #1: Kratom The Situation You’re hiking the Appalachian trail in the dead of winter. Suddenly the worst happens; your boot gets caught between two rocks, you lose your footing and tumble to the ground, wrenching your ankle in the process. © Miserlou What It Is A leafy green plant grown mainly in Southeast Asia. Uses First and foremost, Kratom is a powerful painkiller similar to Morphine or Opium. Side-Effects Kratom is mildly addictive, about on par with caffeine. Forms Kratom can be purchased in dried leafy form, as an extract, a resin, or in pill form. Legality Kratom is legal in most of the developed world. #2: Kava Kava Kava Kava A leafy green plant grown throughout the Pacific islands. Kava can help to treat social anxiety or stress, and also works as a powerful relaxant. Oil of Oregano

Urban Travel Blog - City Guides & Travel Articles Workaway.info the site for free work exchange. Gap year volunteer for food and accommodation whilst travelling abroad. How to Be Safe in a Foreign Country Edit Article Edited by Dan Knows All, Maluniu, Jack Herrick, Zack and 49 others While being in a foreign country may be fun, there is always danger abroad, just as there is danger at home. All visitors from any country should learn what the dangers are in foreign countries and how to protect themselves no matter how sure they are that they are safe. Ad Steps 1Research the country you are going to before you go. 16If driving, be alert to changes in the rules of the road. Tips If you are in a country where political tensions are high, be extremely careful.

10 Irish Words You Should Know When Traveling Around the Emerald Isle | Ir... - StumbleUpon One of the great things about traveling to Ireland is that the Irish people speak English. Or at least most of them do! In fact, over a half million Irish claim to speak Irish, the native language, often referred to as “Gaelic” by visitors. Normally, you do not need to know any Irish language words in the course of staying at hotels or B&Bs, eating in restaurants, going shopping, or taking part in the conviviality of pubs. However, it is useful to know some Irish words when traveling around the countryside – because there are certain areas in Ireland where Irish is the everyday spoken language and signs on the roads are all in Irish. Gaeltacht – Region or district in Ireland where Irish (Gaelic) is the predominant language. TWO MORE TO ADD TO YOUR LIST from our editors…There are two words we’d add to the list as well… they are often used to label the “toilets” (the Irish don’t usually use the word “bathroom”)Mná = Women & Fir = MenWe wouldn’t want you walking into the wrong “restroom”!

Female Solo Travel Tips - Women Travelling Solo - StumbleUpon Are you looking for female solo travel trips? Would you like to know what countries are best for women travelling solo to get their feet wet? We put those questions to our Facebook community as we love getting insider tips from other travellers. While most of my travel around the world has been done with Craig, my first adventures saw me setting off into the untamed wilderness on my own. Female Solo Travel Tips Don’t think about the possible dangers There are a million things that can go wrong, no matter how you are travelling. But, that doesn’t stop you from getting on with your life right? Be Aware Keep your wits about yourself and your surroundings at all time. Trust your intuition It always knows best. Don’t freak yourself out by imaginary monsters, but definitely pay attention to those little messages our animal instincts give us. Walk assertively and confidently When I was in year 9 we had to do a self-defence course for sport at school. Always walk assertively and confidently.

Amazon.com: Online Shopping for Electronics, Apparel, Computers, Books, DVDs & more China tourist information and practical travel advice Last updated: 19 April 2014 The travel advice summary below is provided by the Foreign and Commonwealth Office in the UK. 'We' refers to the Foreign and Commonwealth Office. For their full travel advice, visit www.gov.uk/foreign-travel-advice. On 1 March 2014 a terrorist attack at Kunming station in south west China killed more than 30 people and injured over 140. The tropical cyclone (typhoon) season in China normally runs from May to November, affecting the southern and eastern coastal regions of China. Take particular care if travelling in Tibet or Xinjiang Uyghur Autonomous Region. China is prone to earthquakes. Cases of Avian Influenza (Bird Flu) have been reported in eastern and southern China. Territorial disputes between China and neighbouring countries have caused high regional tension. Foreign nationals over the age of 16 must carry their passport at all times. You must register your place of residence with the local Public Security Bureau within 24 hours of arrival.