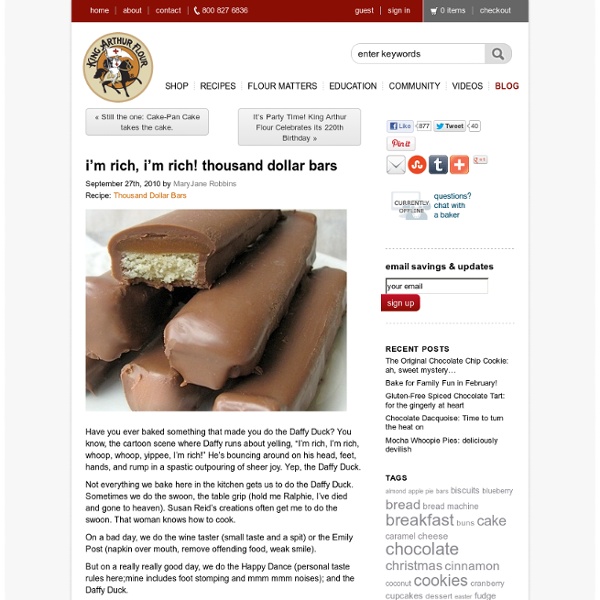 Have you ever baked something that made you do the Daffy Duck? You know, the cartoon scene where Daffy runs about yelling, “I’m rich, I’m rich, whoop, whoop, yippee, I’m rich!” He’s bouncing around on his head, feet, hands, and rump in a spastic outpouring of sheer joy. Yep, the Daffy Duck. Not everything we bake here in the kitchen gets us to do the Daffy Duck. Sometimes we do the swoon, the table grip (hold me Ralphie, I’ve died and gone to heaven). On a bad day, we do the wine taster (small taste and a spit) or the Emily Post (napkin over mouth, remove offending food, weak smile). But on a really really good day, we do the Happy Dance (personal taste rules here;mine includes foot stomping and mmm mmm noises); and the Daffy Duck. These Thousand Dollar Bars did just that for us here at KAF. These bars definitely remind people of Twix® bars, both in shape and taste, but OH, so much better when top-end caramel and chocolate is used. Preheat the oven to 300°F.

Homemade Pop-Tarts When I was a kid, I loved Pop-Tarts. My mom rarely bought them for us because of how unhealthy they are, but when I saw those babies in the pantry, I was pretty excited! My favorite was always strawberry, which is why I decided to make that version of these myself. I’m no health nut, but that might be because I don’t buy a lot of pre-packaged foods. The only things of that nature that I stock my pantry with on a regular basis are low-fat popcorn, rice cakes, pretzels, the occasional tortilla chips, and every once in a while, I’ll buy ice cream. Cake Batter Chocolate Bark I don’t think I’ve ever been so excited to share a recipe with you. Or to lick a bowl. The secret ingredient here? You may think I’m crazy… but it’s a spoonful of actual cake mix. All you must do is whisk it well into the melted white chocolate. Best decision ever.

Cinnamon Roll Sugar Cookies - StumbleUpon These are divine. Truly. They taste just like your favorite breakfast treat but in fabulous cookie form. I wish I could take credit for the idea, but I stumbled on something like it and thought I would give it a whirl. A Tasty Recipe: That’s the Best Frosting I’ve Ever Had – Tasty Kitchen Blog I’ve been intrigued with this frosting recipe for months, not just because of its alluring title, but also because if its ingredients. Five tablespoons of flour? In frosting?

Salted Chocolate We’re watching our friend’s cat right now, and it’s a lot of fun. Kramer and I want to get a pet so badly, but I just don’t think that I have the time, energy, or, frankly, money, to take care of an animal the way I would like to. For now, though, it’s just fun to pretend to have a pet for a week. His name is Eddie and he’s pretty funny. I’ve never had a cat before, but Kramer grew up with them so he’s more accustomed to their behavior than I am. Churro Tots - StumbleUpon Happy Wednesday, beautiful people.Factoid for you: Getting my car serviced stresses me.To deal, I totally made Churro Tots. Throw in stress eating and calls to dad, and it some how made everything okay. I encourage it!Last week I went to a cookbook release party at Border Grill and they had churros…in tot form! I was blown away by their cuteness–had to replicate it stat for you all.I basically made a tweaked and adjusted version of this pate a choux recipe. And then fried small balls of the dough.

Easy Homemade Ice Cream without a Machine July is National Ice Cream month, and I’m so excited to show you how making your own homemade ice cream is easier than you may think! No ice cream maker? No problem. Apartment Therapy The Kitchn When I was a child, there weren't a lot of sweets in our house, but come Christmastime, little teasing bits of my mom's holiday toffee would show up in my normally sugar-starved lunch bag during the week before school let out. Then, during our annual Christmas Eve tamale party, huge platters would appear, with piles of the stuff stacked high like poker chips. Though I moved across the country almost twenty years ago, she hasn't missed a single season of toffee.

Making Life Delicious &#8482; - StumbleUpon When I was young and poor, before Jimmer and I got married, we used to entertain ourselves by spending hours in used book stores. Jimmer would search for underpriced collectable books and I would get comfy in the cookbook section. A house, two kids, a cat and a dog later, our lives are quite scheduled.

Crème Brûlée Today is a very special day. It’s a special day because I’m sharing with you my favorite dessert on earth. Mmm…Crème Brûlée. Apartment Therapy The Kitchn Do you know what a Buckeye is? It's a poisonous nut. It's also, of course, the mascot for Ohio State and an addictive candy that shows up at every OSU football party - little balls of sweet peanut butter, dipped in chocolate. The Baker Chick: Cinnamon Roll Pancakes - StumbleUpon There are certain recipes that when I see I absolutely have to make. This doesn’t happen all that often. Usually I’ll admire something and bookmark it, maybe getting inspired by another beautiful recipe along the way. But the moment I saw the words “Cinnamon Roll Pancakes,” I stopped in my tracks and did a double take.