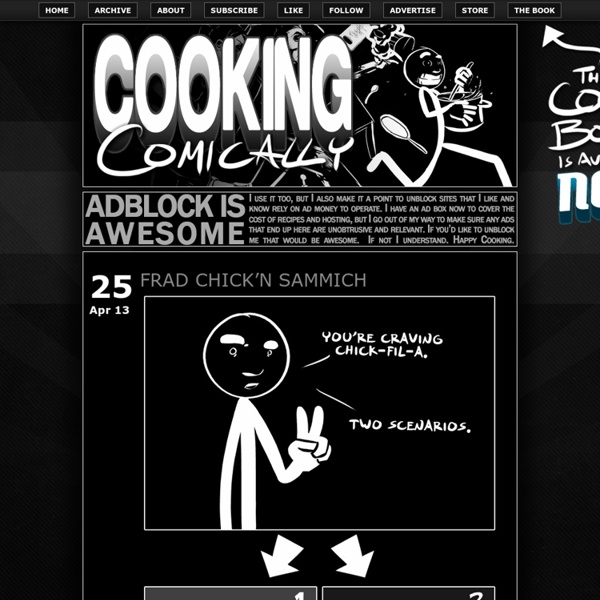 50 Tacos : Recipes and Cooking How to heat taco shells and tortillas: Hard taco shells: Bake 4 minutes at 350 degrees F, or microwave 45 seconds. Soft 6-inch corn or flour tortillas: Heat in a dry skillet or on the grill, 30 seconds per side, or wrap in foil and bake 10 minutes at 400 degrees F. You can also wrap in a damp towel and microwave 1 minute. 1. Siu Mai 31st May 2012By KurtPhotography by Adam These little bite-sized morsels are my absolute favourite item from the yum char menu. I quite often meet my wife and her family for a yum char lunch during the week. It makes a nice little break from my working day, and even better the restaurant is right across the road from the office. Three things always happen; we order way too much food, we eat all of it (even if our sides are splitting), then we quietly make our way back to work for a little nap. Well not quite a nap, but a very slow couple of hours!

Smoky Sweet Potato Burgers with Roasted Garlic Cream and Avocado Before we talk burgers, let me tell you what I’m doing. I’m eating some blueberry yogurt pretzels (which are oh-so awesome… but would be even awesomer if they were really coated in yogurt and not white chocolate disguised as yogurt) and drinking a san pellgrino aranciata that is spiked with um… vodka, malibu and tequila. With those pretty perfectly square ice cubes. I know. I just couldn’t decide! I just kept adding things to the soda until I got a taste that I liked. Foodbuzz 24, 24, 24: Chinese Buffet at Home It is no secret that I have an obsession with Chinese cuisine. The place that started it all was a local Chinese buffet here in Michigan. After frequent visits to the buffet over the years, I finally decided to take a stab at cooking my own Chinese dishes at home. The majority of the dishes were delicious and I began cooking different Chinese meals every week, but I had always wanted more variety just like the buffet. I had always wondered, “what if I could create a Chinese buffet at home?” I have wanted to do this for along time so I was very excited when I was chosen to be part of the 24,24,24 event presented by Foodbuzz.

Dulce de Leche Recipe, How To Make Dulce de Leche, Arequipe, Manjar Blanco, Milk Jam, Milk Sweet, Sweet Milk Sauce, Oven Dulce de Leche, Stove Tip Dulce de Leche, Microwave Dulce de Leche Dulce de leche, pronounced DOOL-say duh LAY-chay) is a luscious sweetened milk sauce that is literally finger-linking good! The name means "milk sweet," "milk jam," and "sweet milk sauce." Dulce De Leche is a decadent and amazing dessert sauce that is sweetened milk that condenses down to a caramel sauce after a long period of slow cooking. I would consider this the bacon of dessert sauces! Just like bacon seems to enhance the flavor of most savory foods, Dulce De Leche enhances the flavor of almost any dessert or fruit where you want to top with sweetness or elevate the height of flavor. I brought the Dulce de leche to a recent dinner party as a dip for fruit.

Gnocchi Mac & Cheese Ahhhh mac and cheese. Those mere words stir up feelings of comfort...home....the food you loved as a kid. If you asked a 100 people what their favorite comfort food was, I'm guessing close to half would say mac and cheese. I'm sure meatloaf and mashed potatoes are right up there too. Why is that the combination of cheese and pasta can make our mouths water? I'm all about trying different kinds of mac and cheese recipes and this one was no exception. Char Siu Bao (Pork Buns) 20th May 2012By KatePhotography by Adam When I was living in Japan I used to buy these buns from the seven eleven below my apartment. In true Japanese style in addition to the traditional Chinese fillings they came in all sorts of kooky flavours like pizza, cheese & curry and chicken and mayonnaise. Along with a can of hot coffee they were a most reliable cure after a night out clubbing in Ropponggi.

Scalloped Hasselback Potatoes “Scalloped” is an attractive word, isn’t it? When I hear it I think of several things: first, there’s scallops, as in the seafood—totally delicious. Then there’s the scalloped shape that can live on the edge of a pair of shorts or on the collar of a woman’s blouse—always pretty and dainty. And of course scalloped potatoes also comes to mind, which carries my imagination to a land of crispy potato skins drenched in a sea of cheese and cream. I can think of no better place to exist, actually.

Making French Onion Soup Onion soup, with croutons and melted cheese/Photos by Donna Turner Ruhlman Funny. The recipes people are pulled toward, desire, crave, are the most basic. Like Onion soup. Part of why I love people’s hunger for basic food is because there’s so much to learn from the simplest dishes. This recipe is from the new book, Ruhlman’s Twenty. 100 Delicious, Dirt-Cheap Recipes for the Starving Student - OnlineCollege.org Most students don’t have a lot of cash to spend on food, but that doesn’t mean you have to go hungry. With the right recipes and some kitchen savvy, you can eat great even on a student’s budget. Here we’ll share 100 tasty recipes that you can make on the cheap. Along with saving money on meals, budget-savvy students can also save big on a college education by attending inexpensive online colleges. Breakfast

Sausage Stuffed Shells Recipe with Spinach After taking the photo for our sausage stuffed shells recipe, I scrambled into the kitchen to grab plates, knifes, forks and napkins — you know, like any normal person would do before sitting down to have a nice meal with their husband. Just as I was leaving the kitchen, I realized something. I left the shells with Adam. Alone. How he did it, I’m not sure, but in the time it took me to go to the kitchen, grab our supplies and get back to him, he had finished at least half of the shells. Being someone who likes to look on the bright side of life, that made me think the recipe was a success and as Adam mentioned to me just after his last stuffed shell, hey, maybe we can say these are finger food!

Baked Potato Grilled Cheese Behold my latest creation…THE BAKED POTATO GRILLED CHEESE! After the glory that was the Brocolli & Cheddar Soup Grilled Cheese , I began racking my brain for what other wonderful things I could deconstruct into grilled cheese format. Soon enough I had envisioned this piece of grilled cheese heaven! I mean how can you go wrong with fried potatoes, bacon, cheese, sour cream and chives all made into a melty grilled cheese?