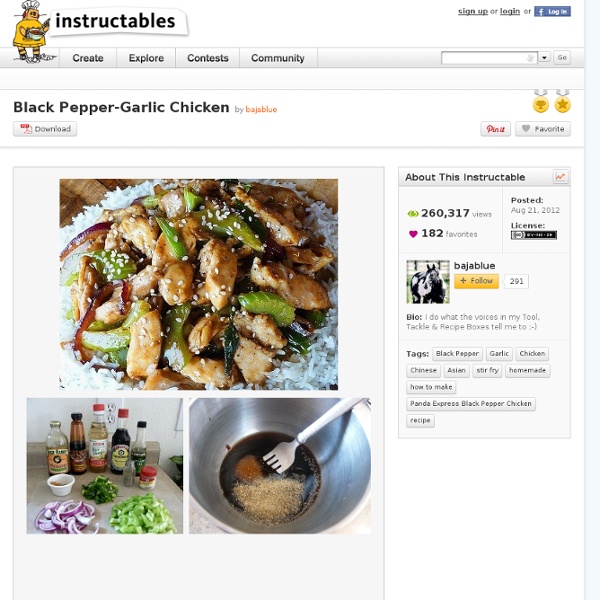 Here's one on my favorite Stir-fry recipes, inspired by Black Pepper Chicken served at Panda Express Restaurants. The savory sauce took a bit of tinkering, but I think this copycat version is really close... and it's delicious, too! Please... don't forget to start this recipe with Velveted Chicken. It's a very simple technique that'll turn any Chicken Stir-fry into a mouth-watering Asian masterpiece! Ingredients: 1 lb. Stir all of the sauce ingredients together in a small bowl, allowing about 10-15 minutes for the flavors to mingle/mature while you slice the vegetables. Stir-fry: Heat 2 Tablespoons oil in a large skillet or wok over medium-high heat until almost smoking. Add the sliced red/yellow onions to the skillet, stirring constantly for about one minute. Add the sliced celery, green onions and chopped garlic to the skillet. Add the stir-fry sauce. Add the velveted chicken, reduce the heat to medium and stir to coat. Serve over prepared Basmati or Jasmine Rice. Enjoy! Related:  Dinners

Gnocchi Mac and Cheese March 4, 2011 | Print | E-mail | Filed under cheese, Italian, potato It’s been quite a while since I posted my recipe for sweet potato gnocchi with brown butter sauce, so I decided that it was high time to post my go-to gnocchi recipe that this sweet, autumn version is based on. This is what I make when I want comfort food and have a little extra time on my hands, since the recipe makes a ton of gnocchi. It’s worth the effort though since they freeze wonderfully, and it’s nice to have on hand both for company and for when I want a quick freezer meal during the week but still want something homemade. For the gnocchi: 6 baking potatoes2 eggs1 tsp salt2-3 cups flour1/3 cup grated Parmesan-Romano cheese For the gnocchi mac and cheese (serves 1-2): 1/2 lb gnocchi1 Tbsp butter1 clove garlic, minced1 Tbsp flour1/4 cup milk1/8 cup shredded fontina cheese1/4 cup shredded Parmigiano-Romano cheese To make the gnocchi, preheat the oven to 450 degrees. Cool the potatoes before peeling. Leave a Reply

Balsamic BBQ Glazed Chicken A homemade balsamic bbq sauce is used to glaze chicken as it’s grilling. The result is tender chicken with a slightly sweet, and tangy taste. Summer is one of my favorite seasons for one simple reason: grilling. We finally invested in a Big Green Egg last year and it completely changed the way I think about grilling. This recipe is all about the balsamic bbq sauce that you use to baste the chicken while it’s grilling. While I used a grill pan with great success, I know this recipe would turn out even better using a grill. Is anyone else just itching for Spring to arrive? Prep Time: 5mn Cook Time: 35mn Total Time: 40mn 4 boneless skinless chicken breasts1 cup balsamic vinegar3/4 cup ketchup1/3 cup brown sugar1 tablespoon Worcestershire sauce1 tablespoon Dijon mustard1/2 teaspoon salt1/2 teaspoon black pepper1/2 teaspoon garlic powder In a sauce pan, combine balsamic vinegar, ketchup, brown sugar, Worcestershire sauce, Dijon mustard, salt, black peper, and garlic powder.

What Are Your 4 Pounds Made Of? People generally eat between 3 and 5 pounds of food each day. If we prioritize natural, whole foods, the 4 pounds we choose will fill us up while boosting health and lowering body fat. If we choose “junk food”… I don’t know what you had for lunch today, but I had 18 apples. What do you think of that? But check this – a typical fast food value meal has the same amount of calories as 18 apples. 18! Not pretty. Yet I’ve had buddies knock back 2 value meals while watching Monday Night Football. What does this tell me? Remember: Real food regulates appetite – so you don’t overeatReal food controls blood sugar/insulin – so you can avoid energy swings and diabetesReal food provides the best nutrition – so you can remain healthy for lifeReal food has a sane amount of energy – so that you can’t accidentally overeatReal food has a longstanding relationship with our body – so that our bodies know what to do with it Energy density This leads me to the world of energy density. Seeing a trend?

Low Calorie Chicken Recipes - Healthy Under 300 Calories Chicken Recipes Chicken: the dieter’s best friend. Quick and easy to make, this popular protein is low in calories and full of amino acids, which boost your body’s ability to function. But being low-cal doesn’t have to mean boring and bland; if done right, light and, yes, even dark meat are ideal for keeping you on track. From Jamaican Jerk BBQ Chicken to Lemon-Oregano Chicken Skewers, pair any of these recipes with steamed seasonal veggies or a fresh green salad for a healthy meal that won’t leave you hungry. 1. Chicken with Tomatoes and ArugulaYou’ll never miss the fat in this boneless chicken breast dish thanks to a savory combination of garlic, plum tomatoes and arugula with a dusting of Parmesan cheese. 2. 3. 4. 5. 6. 7. 8. 9. 10. 11. 12. 13. 14. 15.

Honey Mustard Chicken with Bacon and Mushrooms “This is probably my favorite way to eat chicken.” That’s a quote from my husband the last time I made Honey Mustard Chicken with Bacon and Mushrooms for dinner. Marinate some chicken breasts in honey, mustard, and lemon, then top with bacon, mushrooms and cheese… How could that go wrong? I love to serve this dish with a side of oven fries and a crisp lettuce salad. It’s a meal full of flavor! Begin by making the marinade for the chicken. Here’s what you’ll need for the toppings: sliced fresh mushrooms, mostly cooked bacon (it will cook more when baked in the oven), grated cheddar, and fresh parsley. After the chicken has marinated, heat a small amount of oil in a large skillet. Scrape out the pan, and toss in the mushrooms. Assemble the chicken in a large baking dish. After baking for about 20 minutes, chop up some fresh parsley and sprinkle atop before serving! Honey Mustard Chicken with Bacon and Mushrooms 1 to 1 1/2 pounds boneless skinless chicken breasts 1/4 cup Dijon mustard

Diet: Weight Loss and Metabolism The last time it happened, it was the girl who cuts my hair. "So, what kind of diet are you on?" There are plenty of experts who claim that all that matters is the number of calories you eat: If you want to lose weight, eat fewer calories than you burn. Case in point: carbohydrates. But here's what's surprising: High-sugar carbohydrates aren't always bad. Lose weight around the clock with The 8-Hour Diet! Time Zone 1: Right after You Wake In a study of 2,831 people, researchers at Harvard University found that those who ate breakfast every day were 44 percent less likely to be overweight and 41 percent less likely to suffer from insulin resistance—a precursor to diabetes—than those who had no a.m. meal. How to eat: Fill your plate with high-quality protein, slow-digesting carbohydrates, and healthy fats. Time Zone 2: Every 3 Hours after Breakfast Waiting more than 4 or 5 hours between meals causes your blood sugar to bottom out, leaving you weak, irritable, and tired. 1. 2.

Sriracha Honey Lime Chicken Recipe - i am a food blog The weather’s warming up and long weekends are on the horizon. You know what that means…grill season! I know I say I love a lot of things, but I really, really love summer barbecues. I guess I’m being slightly deceptive though because this isn’t actually a grilling recipe. That’s not to say it can’t be for the grill though – the basic recipe is: cook your chicken, then glaze it with a sweet, spicy, tangy sriracha-honey-lime mix. I don’t think I know anyone who doesn’t like grilled food and my theory behind this is: grilled food is the food of our ancestors. Me (dancing around with the joy of barbecue in my veins): I LOVE barbecue. And that is why humans like grilled things. Cavemen aside, what is there not to like about this chicken?! i am spicy, i am sweet: i am sriracha honey lime chicken!