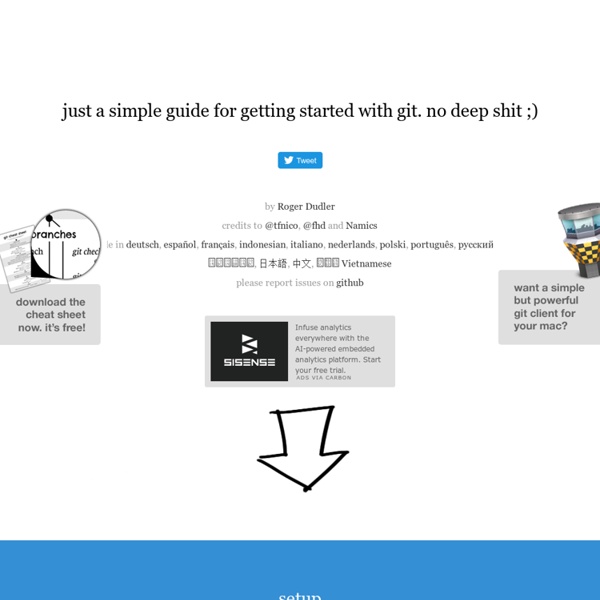 HERMES HER­MES is a pro­ject man­age­ment method for pro­jects in the con­text of in­for­ma­tion tech­nol­ogy, the de­vel­op­ment of ser­vices and prod­ucts, and the chang­ing of or­ga­ni­za­tional struc­tures. HER­MES sup­ports the steer­ing, man­age­ment, and ex­e­cu­tion of pro­jects of a vary­ing na­ture and com­plex­ity. As a method, HER­MES is clearly struc­tured and sim­ple to un­der­stand with a mod­u­lar, eas­ily ex­pand­able de­sign. The fol­low­ing de­scribes the es­sen­tial el­e­ments of the HER­MES method and how they in­ter­act. Sce­nar­ios Three Battle Tested Ways to Install PostgreSQL Having run over 100 students through my Ruby on Rails courses, I've come up with some straight forward ways to install PostgreSQL without too much pain. Here is how I do it: PostgreSQL is a relational database manager that keeps getting more and more popular within the web development community. It has taken over from MySQL as the preferred tool for production quality, scalable databases. The rise in popularity is likely due to the backlash from Oracle purchasing and messing with MySQL, Heroku choosing Postgres as the preferred database in production, and Postgres' faster pace of development of new features like Arrays and HStore.

Generating SSH Keys SSH keys are a way to identify trusted computers, without involving passwords. The steps below will walk you through generating an SSH key and adding the public key to your GitHub account. We recommend that you regularly review your SSH keys list and revoke any that haven't been used in a while. Amazon Prime or Amazon Redline? Amazon’s same-day delivery service skirts many predominantly minority neighborhoods, raising a familiar charge that tech-company business imperatives can result in de facto digital inequality. Amazon has held out its Amazon Prime membership, which offers free shipping on many items, as a form of digital equality, given that all customers pay the same $99 annual fee. But with its upgrade to same-day delivery service, a clear disparity is emerging. An analysis by Bloomberg found that in many major cities, Prime members in predominantly poor and black neighborhoods can’t get the same-day treatment. In cities including Atlanta, Chicago, Dallas, and Washington, “black citizens are about half as likely to live in neighborhoods with access to Amazon same-day delivery as white residents,” the Bloomberg analysis found. New York’s borough of the Bronx, for instance, doesn’t get the service.

Ignoring files From time to time, there are files you don't want Git to check in to GitHub. There are a few ways to tell Git which files to ignore. Create a local .gitignore If you create a file in your repository named .gitignore, Git uses it to determine which files and directories to ignore, before you make a commit. A .gitignore file should be committed into your repository, in order to share the ignore rules with any other users that clone the repository. GitHub maintains an official list of recommended .gitignore files for many popular operating systems, environments, and languages in the github/gitignore public repository. Five OpenAI Five plays 180 years worth of games against itself every day, learning via self-play. It trains using a scaled-up version of Proximal Policy Optimization running on 256 GPUs and 128,000 CPU cores — a larger-scale version of the system we built to play the much-simpler solo variant of the game last year. Using a separate LSTM for each hero and no human data, it learns recognizable strategies. This indicates that reinforcement learning can yield long-term planning with large but achievable scale — without fundamental advances, contrary to our own expectations upon starting the project. To benchmark our progress, we’ll host a match versus top players on July 28th. Follow us on Twitch to view the live broadcast, or request an invite to attend in person!

50 Reasons not to use Photoshop for Webdesign First things first, I love Photoshop. It is the world’s best program for image editing. I do not intend to say Photoshop is a bad program, I just wish to clear up the misunderstanding that Photoshop is the right tool to use for web and screen design. The Second Pull Request Could be (Much) Better When considering pull requests on Github, we need to keep in mind that even if someone’s first pull request is not 100% perfect, his/her second one could be much better (if he/she is willing to continue the contribution). I have observed this phenomenon several times, and that is one of the reasons why I want to carefully review and help with people’s first pull requests. I’m looking at the future, instead of only the current pull request. ‘Do What You Love’ Is Terrible Advice It’s been said in many places and by many luminaries: Do what you love. But what does this phrase actually mean? Miya Tokumitsu, a contributing editor at Jacobin magazine and author of the new book Do What You Love And Other Lies About Success and Happiness, criticizes the pervasiveness of this idea in American work culture. She argues that “doing what you love” has been co-opted by corporate interests, giving employers more power to exploit their workers. I recently spoke with Tokumitsu about work myths and why we should pay attention to them. The following transcript of our conversation has been edited for clarity.

CSS Practice: Pseudo-Namespaces in Complex Projects · Jens O CSS Practice: Pseudo-Namespaces in Complex Projects Jens O. Meiert, March 21, 2007 (↻ August 16, 2013). This entry has been written by Jens the Web Developer. The next wave of computing – Muneeb Ali Entrepreneurs, tech investors, and policy makers spend considerable time thinking about the future of computing. In this post, I’ll present my prediction for what the next major wave of computing will be. To predict the future, we must first understand the past. Early computers were bulky and filled entire rooms. The mainframes of the 1960s and 1970s had a “centralized” computing model where a single mainframe would serve an entire office building, and “dumb” terminals would send compute-jobs to the mainframe.

Tutorial - How To Structure a Meteor Application So far, all of the example applications in the previous tutorials have had the simplest possible file structures: a HTML file a JavaScript file a CSS file This has been fine for introducing basic concepts but it’s rare for real-world applications to be structured so simply. That’s not to say that the average Meteor application will have a complicated structure, but it will certainly evolve as we write more code and make better use of Meteor’s features.