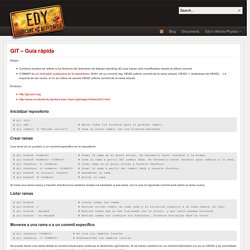 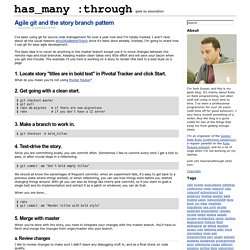 I won't rave about all the usual reasons WhyGitIsBetterThanX since it's been done already. Instead, I'm going to share how I use git for easy agile development. The basic idea is to never do anything in the master branch except use it to move changes between the remote repo and local branches. Keeping master clean takes very little effort and will save your bacon when you get into trouble. The example I'll use here is working on a story to render title text in a bold style on a page. 1.

What do you mean you're not using Pivotal Tracker? 2. . $ git checkout master $ git pull $ rake db:migrate # if there are new migrations $ rake # if you don't have a CI server. A Git Workflow for Agile Teams - reinh.com. An efficient workflow for developers in Agile teams that handles features and bugs while keeping a clean and sane history. 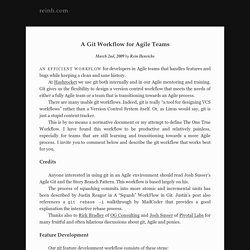 At Hashrocket we use git both internally and in our Agile mentoring and training. Git gives us the flexibility to design a version control workflow that meets the needs of either a fully Agile team or a team that is transitioning towards an Agile process. There are many usable git workflows. Indeed, git is really “a tool for designing VCS workflows” rather than a Version Control System itself. Or, as Linus would say, git is just a stupid content tracker. This is by no means a normative document or my attempt to define The One True Workflow. Credits Anyone interested in using git in an Agile environment should read Josh Susser’s Agile Git and the Story Branch Pattern.

The process of squashing commits into more atomic and incremental units has been described by Justin Reagor in A “Squash” WorkFlow in Git. Feature Development git pull origin master Save and close the file. How to Write a Git Commit Message. 31 Aug 2014 Introduction | The Seven Rules | Tips Introduction: Why good commit messages matter If you browse the log of any random git repository you will probably find its commit messages are more or less a mess. 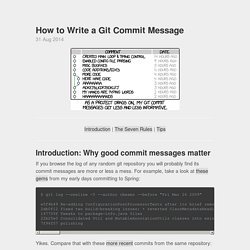 The former varies wildly in length and form; the latter is concise and consistent. While many repositories' logs look like the former, there are exceptions. Re-establishing the context of a piece of code is wasteful. 5 Useful Tips For A Better Commit Message. You’re already writing decent commit messages. 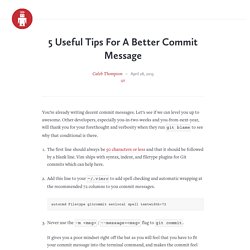 Let’s see if we can level you up to awesome. Other developers, especially you-in-two-weeks and you-from-next-year, will thank you for your forethought and verbosity when they run git blame to see why that conditional is there. The first line should always be 50 characters or less and that it should be followed by a blank line. Vim ships with syntax, indent, and filetype plugins for Git commits which can help here.Add this line to your ~/.vimrc to add spell checking and automatic wrapping at the recommended 72 columns to you commit messages. autocmd Filetype gitcommit setlocal spell textwidth=72 Never use the -m <msg> / --message=<msg> flag to git commit. A Better Git Commit. I am a bad committer, there is no lying. 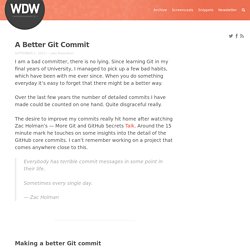 Since learning Git in my final years of University, I managed to pick up a few bad habits, which have been with me ever since. When you do something everyday it’s easy to forget that there might be a better way. Over the last few years the number of detailed commits I have made could be counted on one hand. Quite disgraceful really. The desire to improve my commits really hit home after watching Zac Holman’s — More Git and GitHub Secrets Talk. Everybody has terrible commit messages in some point in their life.Sometimes every single day.— Zac Holman.