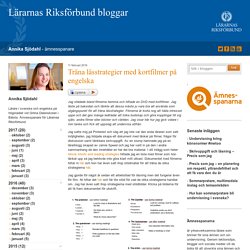 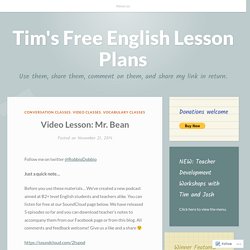 Bean packs his suitcase” thanks to British Council for bringing it to my attention in their lesson plan on making predictions but I’ve adapted it for use in different ways with different levels. Kids and lower levels The aim of this lesson plan is to practice holiday vocabulary (clothes and items that go in a suitcase) and some basic grammar structure.

List of videolessons from the English learning series EXTR@ ENGLISH - in Mult... A cool TV series, a funny sitcom, and an English course, all wrapped in one single package to make Extr@, the perfect way of learning natural English having fun.SEE THE OTHER EPISODES HERE ! 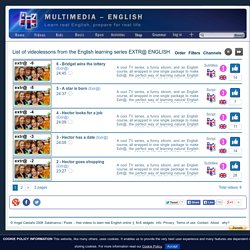 Do extr@ activities hereAnnie and Bridget share a flat. Their next-door neighbour Nick is a disorganized, humorous macho fellow. Bridget's Argentinean penpal, Hector, comes to London to visit her. His limited command of English serves as the central dynamic for the language learning content of the series. His trying to get to grips with the daily English is highly amusing (and enlightening).You do not need a tutor. Subtitles Script. Short films. How can film help you teach or learn English? What can film and video add to the learning experience? 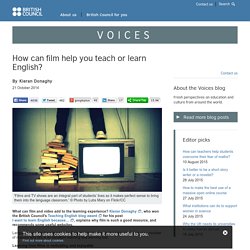 We also have special collections of . Free Comedy & Dramas 125 Korean Feature Films – Free – The Korean Film Archive has put on YouTube over 100 Korean feature films, including Im Kwon-taek’s Sopyonje and Hong Sangsoo’s The Day the Pig Fell Into a Well. A bonanza for fans of Korean film.70 Movies in HD from Famed Russian Studio Mosfilm – Free – Includes films by Tarkovsky, Eisenstein and Kurosawa, plus Sergei Bondarchuk’s 1969 adaptation of Leo Tolstoy’s War and Peace. These all appear on Mosfilm’s official YouTube channel.A Farewell to Arms – Free – Gary Cooper and Helen Hayes star in a film based on famous novel by Ernest Hemingway. (1932)A Hunting Accident – Free – Soviet romantic drama directed by Emil Loteanu, adapted from Anton Chekhov’s “The Shooting Party.” Collective:unconscious – Free – Five indie filmmakers adapt each other’s dreams for the screen.

Your Secret. This EFL lesson is based around a short film called Your Secret. 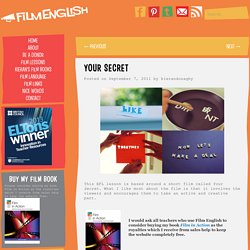 What I like most about the film is that it involves the viewers and encourages them to take an active and creative part. I would ask all teachers who use Film English to consider buying my book Film in Action as the royalties which I receive from sales help to keep the website completely free. English Attack! British Pathé Uploads Entire 85,000-Film Archive to YouTube in HD. British Pathé, the U.K. newsreel archive company, has uploaded its entire 100-year collection of 85,000 historic films in high resolution to YouTube. 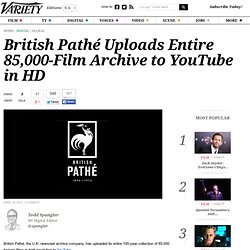 The collection, which spans 1896 to 1976, comprises some 3,500 hours of historical footage of major events, notable figures, fashion, travel, sports and culture. It includes extensive film from both World War I and World War II. “Our hope is that everyone, everywhere who has a computer will see these films and enjoy them,” British Pathé GM Alastair White said in a statement. “This archive is a treasure trove unrivaled in historical and cultural significance that should never be forgotten. Uploading the films to YouTube seemed like the best way to make sure of that.” Personalities captured in the newsreels include Princess Diana, Arnold Schwarzenegger, Elizabeth Taylor, Marilyn Monroe, Fidel Castro, John Lennon, Salvador Dali, Mother Teresa, Muhammad Ali and Charlie Chaplin.

We're pleased to announce the uploading of 85,000 films to YouTube. Lessons On Movies.com - Film English. Oscar Week Special: Seven Teaching Resources on Film Literacy. The Academy Awards are just around the corner, and there are a number of nominated films that can be great teaching tools for educators this year. 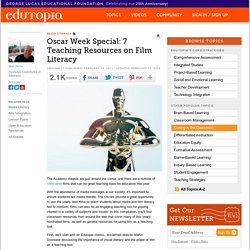 First, we'll start with an Edutopia classic, acclaimed director Martin Scorsese discussing the importance of visual literacy and the power of film as a teaching tool. Film Lesson Plans and Interactive Activities: Into Film is a U.K.