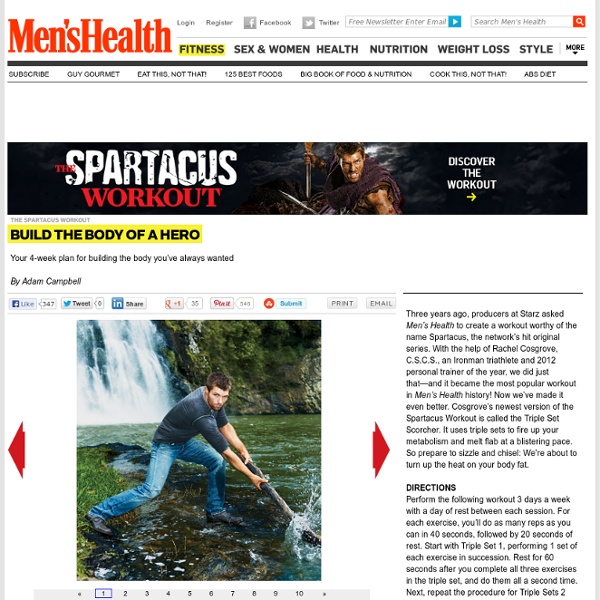 Three years ago, producers at Starz asked Men’s Health to create a workout worthy of the name Spartacus, the network’s hit original series. With the help of Rachel Cosgrove, C.S.C.S., an Ironman triathlete and 2012 personal trainer of the year, we did just that—and it became the most popular workout in Men’s Health history! Now we’ve made it even better. Cosgrove’s newest version of the Spartacus Workout is called the Triple Set Scorcher. DIRECTIONS Perform the following workout 3 days a week with a day of rest between each session. PLUS: Spartacus—The Greatest Workout Ever— is now available on DVD! Photograph by Ture Lillegraven Next » 1a: Plank with Leg Lift Assume a pushup position but with your weight on your forearms instead of your hands. 1b: Dumbbell Chop Hold a dumbbell with a hand-over-hand grip above your right shoulder, as shown. 1c: Dumbbell Lunge Hold a pair of dumbbells next to your sides and stand tall with your feet hip-width apart. 2b: Dumbbell Push Press 2c: Goblet Squat

50 Life Hacks to Simplify your World Life hacks are little ways to make our lives easier. These low-budget tips and trick can help you organize and de-clutter space; prolong and preserve your products; or teach you something (e.g., tie a full Windsor) that you simply did not know before. Most of these came from a great post on tumblr. There is also a great subreddit ‘r/lifehacks‘ with some fantastic tips as well. 20. 40. Sources – muxedo task: 99 Life Hacks to make your life easier! If you enjoyed this post, the Sifter highly recommends:

Architect Bypasses Mortgage Payments, Builds a Tiny Home Idaho-based architect Macy Miller longed for a place of her own, but didn't want the burdensome cost of mortgage payments and decided to construct her own compact home. After having a dream back in 2011, Miller mustered up the initiative to design her small yet efficient home known as Tiny House. Interested in the ever-expanding DIY movement as both a way to save on costs and gain some experience with construction, Miller worked on the 196-square-foot home for two years in the hopes of making her dream come true. The house, which was built on top of a flatbed trailer with the use of sustainable materials, just recently finished construction. With so much accomplished on a tight budget, Miller's project is not quite complete as she is currently searching for a place to park her quaint dwelling. Macy Miller's blog via [Inhabitat]

Programming Your Brain: The Art of Learning in Three Steps | BitNative From time to time, I run into people who are interested in breaking into programming. Last night at the company holiday party a guy (we’ll call him Sam) walked up and introduced himself, asking for advice on how to move from his current role over to development. Sam’s attitude impressed me – those with a genuine desire to learn go places quickly. And on many occasions I’ve hired someone very green simply because I could sense a genuine interest in the craft and a hunger for knowledge. Obviously, the road to becoming a better developer begins with learning. Watch someone Thus, I personally watch videos or read books and blogs. Now, be forewarned that according to National Training Laboratories, the percentages on this diagram have no known source behind them, so take my references to the absolute percentages with a grain of salt. Watch someoneTry it yourself and experiment But that’s not the end of the road. Watch someoneTry it yourself and experimentTeach someone else Presto.

How to Change Your Life: A User’s Guide ‘You will never change your life until you change something you do daily.’ ~Mike Murdock By Leo Babauta Start with a simple statement: what do you want to be? Are you hoping to someday be a writer, a musician, a designer, a programmer, a polyglot, a carpenter, a manga artist, an entrepreneur, an expert at something? How do you get there? Do you set yourself a big goal to complete by the end of the year, or in three months? I’m going to lay down the law here, based on many many experiments I’ve done in the last 7 years: nothing will change unless you make a daily change. I’ve tried weekly action steps, things that I do every other day, big bold monthly goals, lots of other permutations. If you’re not willing to make it a daily change, you don’t really want to change your life in this way. So make a daily change. How to Turn an Aspiration Into a Daily Change Let’s name a few aspirations: How do you turn those lofty ideas into daily changes? You get the idea. How to Implement Daily Changes

Amazing Photo Manipulation by Photographer Erik Johansson Swedish photographer and retouch artist Erik Johansson has one of the craziest photography portfolios we’ve ever seen. Erik is completely self-taught in retouching his own photographs to make impossible and extraordinary images. He says his inspiration came from both growing up with a grandmother who painted and having a penchant for escaping into the other worlds of video games, so he naturally blended the two into a technique using computers to generate images that couldn’t be captured by a camera. Check out some of his mind blowing creations below: Cut & Fold – Cut along the dotted line. Drifting Away – A safe place, drifting away. Electric guitar. Expecting winter – Where seasons meet. Snow cover. Big laundry day. Work at sea. Breaking up – Breaking up, drifting apart. Groundbreaking – Let’s go on a field trip. Lazy dog. Set them free – Do the right thing, set them free! Arms break, vases don’t. Roadworker’s coffee break. Penrose LEGO. Fishy island. Revolving theory. Common sense crossing. Face vs.

Ethereal Macro Photos of Snowflakes in the Moments Before They Disappear Russian photographer Andrew Osokin is a master of winter macro photography. His photo collection is chock full of gorgeous super-close-up photographs of insects, flowers, snow, and frost. Among his most impressive shots are photographs of individual snowflakes that have fallen upon the ground and are in the process of melting away. The shots are so detailed and so perfectly framed that you might suspect them of being computer-generated fabrications. They’re not though. You can enjoy many more of Osokin’s impressive photographs (16 pages worth, at the moment) over on his LensArt.ru website. Andrew Osokin Photography [LensArt via The Curious Brain via Colossal] Image credits: Photographs by Andrew Osokin and used with permission

What we learned about human origins in 2013 The 1.8-million-year-old skull unearthed in Dmanisi, Georgia, suggests the earliest members of the Homo genus belonged to the same species, say scientists in a paper published Oct. 18, 2013 in the journal Science.Photo courtesy of Georgian National Museum The existence of a mysterious ancient human lineage and the possibility that the earliest humans were actually all one species were among the human-evolution-related discoveries of 2013. Other breakthroughs include the sequencing of the oldest human DNA yet. Here's a look at what scientists learned about humanity and human origins this year: Mystery lineageRecent analyses of fossil DNA have revealed that modern humans occasionally had sex and produced offspring not only with Neanderthals but also with Denisovans, a relatively newfound lineage whose genetic signature apparently extended from Siberia to the Pacific islands of Oceania. This year, hints began emerging that another mystery human lineage was part of this genetic mix as well.

Some Hero Strapped a GoPro Camera Onto An Eagle And The Footage Is Breathtaking It's a moment of extreme cognitive dissonance when the most patriotic thing you have ever seen in your American life is actually super-French. A video featuring GoPro footage shot by an eagle (!!!) soared to the top of Reddit's video page recently, delighting all who laid eyes upon it. After watching a few times, reminisce over the time that dog directed a music video with the very same model camera here.

More Than 9 in 10 Americans Continue to Believe in God PRINCETON, NJ -- More than 9 in 10 Americans still say "yes" when asked the basic question "Do you believe in God?"; this is down only slightly from the 1940s, when Gallup first asked this question. Despite the many changes that have rippled through American society over the last 6 ½ decades, belief in God as measured in this direct way has remained high and relatively stable. In 1976, Gallup began using a slightly different question format to measure belief in a deity -- "Do you believe in God or a universal spirit?" Young Americans, Liberals, Easterners Least Likely to Believe in God Responses to the two slightly different question formats from Gallup's May 5-8 survey can be combined to provide a larger sample for subgroup analysis. Belief in God drops below 90% among younger Americans, liberals, those living in the East, those with postgraduate educations, and political independents. Belief in God Lower When Other Alternatives Offered Implications Survey Methods