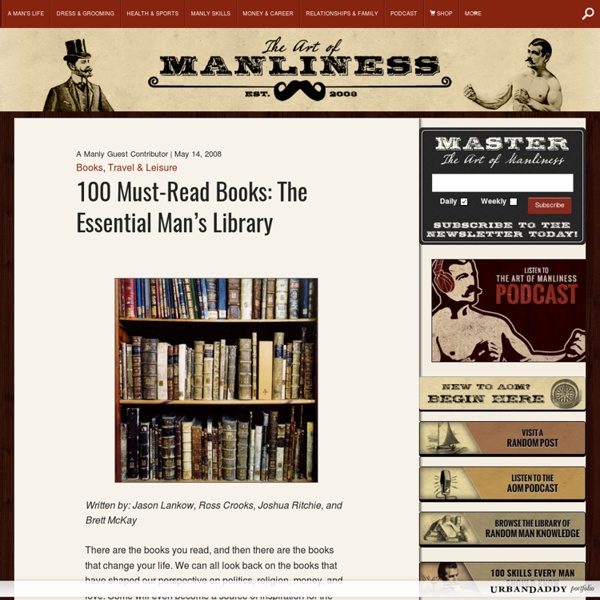 Written by: Jason Lankow, Ross Crooks, Joshua Ritchie, and Brett McKay Photo by the nonist There are the books you read, and then there are the books that change your life. We can all look back on the books that have shaped our perspective on politics, religion, money, and love. Some will even become a source of inspiration for the rest of your life. From a seemingly infinite list of books of anecdotal or literal merit, we have narrowed down the top 100 books that have shaped the lives of individual men while also helping define broader cultural ideas of what it means to be a man. Whether it be a book on adventure, war, or manners, there is so much to learn about life’s great questions from these gems. To see a list of just the titles and authors names for easy printing, click here. Amazon Listmania: The Essential Man’s Library Part I The Great Gatsby by F. Set on the East Coast in the roaring ’20s, this American novel is a classic. The Prince by Niccolo Machiavelli “So then I understood.

Does reading fiction make you a more empathic, better person? Illustration by Charlie Powell Does reading fiction make you a better, less self-absorbed person? You read because you are interested in the broad sweep of human experience, and because you want to gain access into the narrow sanctum of specific otherness—to feel Anna Karenina’s recklessness and desperation, or know the shape and weight of Ahab’s obsession, and thereby something of humanity itself. But in order to make any headway with a novel, you need to grant yourself a leave of absence from human affairs, to sequester yourself in a place where you are sheltered from the demanding presence of other people. Opening a novel might be a kind of exposure to the world beyond the self, but it’s one that necessarily involves a foreclosure against it too. A life spent reading is, among other things, a life spent alone.

Princess Daisy (novel) Princess Daisy is a 1980 romance novel by American author Judith Krantz. The novel tells the story of Princess Marguerite "Daisy" Valensky. She is the daughter of Prince Alexander "Stash" Valensky, a wealthy Russian-born polo player and former playboy, and his wife Francesca Vernon, a beautiful and talented American actress. Stash and Francesca, madly in love, are thrilled by her pregnancy and the news that she is carrying twins. However, a problem during delivery denies one of the twin girls, named Danielle, enough oxygen, and she is born brain-damaged, while Daisy is healthy.

The DSLR Cinematography Guide What you need to know to make beautiful, inexpensive movies using a DSLR. Now available as an updated, expanded eBook — and still 100% free. Subscribe here to receive the free PDF! If you find this guide helpful, please buy your DSLR gear from the Amazon and B&H Photo links here. Introduction That “movie mode” hidden in the menu system of your new DSLR? Triangular theory of love The triangular theory of love is a theory of love developed by psychologist Robert Sternberg. In the context of interpersonal relationships, "the three components of love, according to the triangular theory, are an intimacy component, a passion component, and a decision/commitment component."[1] "The amount of love one experiences depends on the absolute strength of these three components, and the type of love one experiences depends on their strengths relative to each other

100 Must See Movies For Men For whatever reason (most likely the fact that viewing is easier than reading), films don’t seem to get the same kind of cultural respect as books do. Which is a shame because excellent movies can be just as entertaining, mind-expanding, and life changing as good books. Scenes, characters, and quotes from the greatest movies stay with us long after we view them. Their ability to transport you to different times and exotic locations, to completely absorb you in the story, make movies one of the closest approximations of real magic we have in this world. And for better and for worse, film has had a huge impact on masculinity in the 20th Century.

List of the Week: Non-Christian, Religious YA - YA Interrobang Many people have a hard time finding characters in YA that aren’t agnostic or linked (directly or indirectly) to beliefs rooted in Christianity. Want to expand your religious reads? Here are ten reads that feature characters of non-Christian religions! Written in the Stars by Aisha Saeed Publisher: Nancy Paulsen Books Release date: March 24 2015 Naila’s conservative immigrant parents have always said the same thing: She may choose what to study, and what to be when she grows up—but they will choose her husband. Like No Other by Una LaMarche Publisher: Razorbill Release date: July 24 2014 Devorah has never challenged the ways of her strict Hasidic upbringing.

15 Free Guides That Really Teach You USEFUL Stuff Advertisement Over the past months, we’ve written quite a few PDF manuals for you, on all kinds of diverging subjects, including BitTorrent, iTunes, iPhone, Twitter, Mac, Linux, Photoshop and several other topics. Freely available to MakeUseOf subscribers, there are now multiple manuals released every month, for everyone to enjoy.