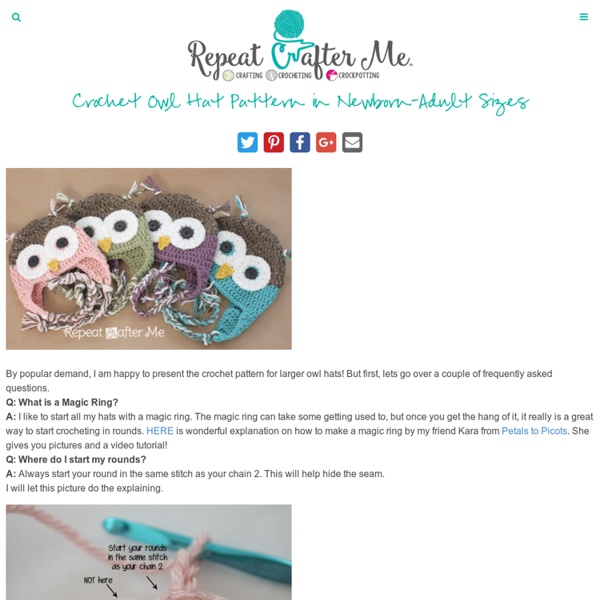 By popular demand, I am happy to present the crochet pattern for larger owl hats! But first, lets go over a couple of frequently asked questions. Q: What is a Magic Ring? A: I like to start all my hats with a magic ring. Q: Where do I start my rounds? A: Always start your round in the same stitch as your chain 2. I will let this picture do the explaining. Q: Where do I join my rounds? A: Always join to first DC, NOT your chain 2. Now for the long awaited patterns! Supplies: • Vanna’s Choice® Lion Brand medium worsted weight yarn (I use Barley and an accent color such as pink, green, purple, turquoise) • Crochet hook size H-8 (5.0 mm) • Tapestry needle for weaving in ends • Two 3/4″ black button for eyes Abbreviations: ch – chain sl st- slip stitch SC – Single Crochet DC – Double Crochet HDC – Half Double Crochet HDC Decrease – Half Double Crochet Decrease TC – Triple Crochet Gauge: 4″ across = 14 double crochet stitches 4″ height = 8 rows of double crochets Size: Newborn is available HERE Nose: Related:  Hats

Easy Crochet Ribbed Hat Pattern Allen Williams I wasn’t expecting to crochet any hats today but this one snuck in to my afternoon. We started Veteran’s Day (Remembrance Day here in Canada) by visiting Michael’s Crafts Store as it was having a two-day sale. I found a 20% off coupon in the local flyer so I couldn’t pass it up. I loaded up on yarn for future projects and then we decided to have dim sum before heading home. Not wanting to take an MSG-induced nap, I decided to put this green and blue variegated yarn to use. I made the hat as suggested in the pattern (size K hook, worsted weight yarn) but I found the hat a bit too tight for a normal adult head. You can really see the crocheted rib style in this photo (and I love the colors in this variegated yarn): It’s only mid-afternoon so I’m thinking there’s time to make one more hat before dinner (assuming I’m not distracted now by blogging). Although a thank-you is not nearly enough for the work you’ve done and continue to do, I hope you know how much it means to me!

Crochet Chick As promised, a new friend for your bunnies! Here’s a cute easy chick for you to crochet: This chick is super easy, I promise you will be able to whip 1 or 3 up in no time at all – I know Easter is almost here… but these guys are a breeze to make! If you would like to make some chicks in time for Easter you will need: Various scraps of yarn and a corresponding hook – I used 8ply and a 4mm hook.2 x 9mm safety eyes (or beads or buttons)A needle to sew your creation together with. 1. Round 1: Make a Magic Circle and chain 3, then crochet 13 DC into the circle and pull tight, join with a SS to complete the round (14 DC). Round 2. Round 3. Round 4. Round 5. Round 6. 2. Round 1: Magic circle (see notes above), CH 1 and 6 SC into the circle, do not join this or any round, continue working in a circle without joining. Round 2: *SC in the next stitch, 2 SC in the next stitch*, repeat between * and * around (9). Round 4: SC in each stitch around. 3. Round 5:SC in each stitch around (15). Like this:

Knitting Easy Peasy Woman’s Winter Hat {Pattern} This hat is really easy! I am happy to share the pattern with you guys. It’s a perfect time of year to start making some warmer hats. I also think it’s great to have a pattern for the ladies since the internet seems to be taken over by children’s hat patterns. Materials:Bulky #5 yarn in any fiber you choose. Note: At the beginning of each round, you will chain 3. When you’re done with the hat you can leave it like it is or add your favorite flower I love my hat. *** Update*** This pattern can now be downloaded as a PDF file! This hat can also be made for a man. I hope you all like the pattern!

Crochet Cat Id like to introduce you to the newest addition to our family, Caity Cat… She’s a pretty little cat who loves to hang out in the garden… hiding amongst the flowers. Caity Cat Tutorial To make Caity Cat you will need: A small amount of coloured yarn and a corresponding hook. 1. 2. 3. 4. 5. 6. 7. 8. Eyes: Sc 5 times and join to form a ring. Because Caity loves flowers she is decorated with crochet flowers- and there is even one on her tail!!! Small crochet flowers: Chain 4 and join to form a ring. Large crochet flower (for the end of Caity’s tail): Chain 4 and join to form a ring. Thats it all done! And the back view… Caity loves to get outside… …with her special friend Maia. Last I saw they were playing a game of hide and seek in the flowers, with Caity’s cousins Kitty Cat and Carrow the Sparrow… Hope you are having a fun weekend! Love Janette xxx Like this: Like Loading... Related Rainbow mitts for Maia In "Creating" Princess Poppy In "Crochet" Crochet hat for a man My husband recently requested a hat.

Grab ammonia out of thin air for fuel of the future - tech - 06 August 2013 Editorial: "Look to the past for the fuel of the future" AS VITAL chemicals go, it's hard to beat ammonia. Industrial production began in the early 20th century, and it played a key role in the second world war and in two Nobel prizes. It brought about a global revolution in agriculture – today, crops grown using ammonia-based fertilisers feed no less than 48 per cent of the planet. Could ammonia also be the clean fuel of the future? When burned, it produces nothing more than water vapour and nitrogen, which makes up 78 per cent of Earth's atmosphere. Most ammonia is produced by heating natural gas or coal as a source of hydrogen, then forcing it to react with atmospheric nitrogen. Now engineer John Holbrook has developed a technique he hopes will make the process cleaner. Holbrook has co-founded NHThree to commercialise the technology. Other groups have already shown that it is possible to grab ammonia cleanly out of thin air. New Scientist Not just a website! More From New Scientist

Crochet Bunny Nibble nibble, hop hop Posted on Updated on If you are a regular follower you will immediately notice that these bunnies are very closely related to some particularly cute owls made recently. You see a distant aunt on their mother’s side fell in love with a completely unsuitable (if you are an owl) rabbit… the rest, so they say, is history. Rabbits, as you well know, breed like, well, rabbits and before we knew it there were not one, but four new members to the family. Right, on with the tutorial. Various scraps of yarn and a corresponding hook – I used 8ply and a 4mm hook.2 x 9mm safety eyes (or beads or buttons)A very small amount of black crochet cotton or embroidery flossA needle to sew your creation together with. Round 1: Make a Magic Circle and chain 3, then crochet 13 DC into the circle and pull tight, join with a SS to complete the round (14 DC). Round 2. Round 3. Round 4. Round 5. Round 6. You need to make two of these (they are the bunny front and back!). Ears. Muzzle. Tail.

Ammonia as fuel of future IN NOVEMBER 1942, Belgium's public bus system ground to a halt, crippled by a wartime shortage of diesel. The standstill caused chaos. Engineers at the country's public transport company got to work and by April 1943 the service was up and running again. The experiment was short-lived, but it proved the point that ammonia – plus a small amount of coal gas to help combustion – could be used as a transport fuel. Seventy years later, ammonia may be ready to ride to the rescue again. These attributes give ammonia an edge over hydrogen, long touted as the fuel of the future in a hypothetical "hydrogen economy". Ammonia isn't a panacea. The road to a low-carbon future won't be straightforward, and it seems certain that we will need a range of energy sources to arrive there in good time. This article appeared in print under the headline "Fill her up... with ammonia" More From New Scientist 'Angry alien' in packing puzzle shocks mathematicians (New Scientist) More from the web Recommended by