One Sentence - True stories, told in one sentence. 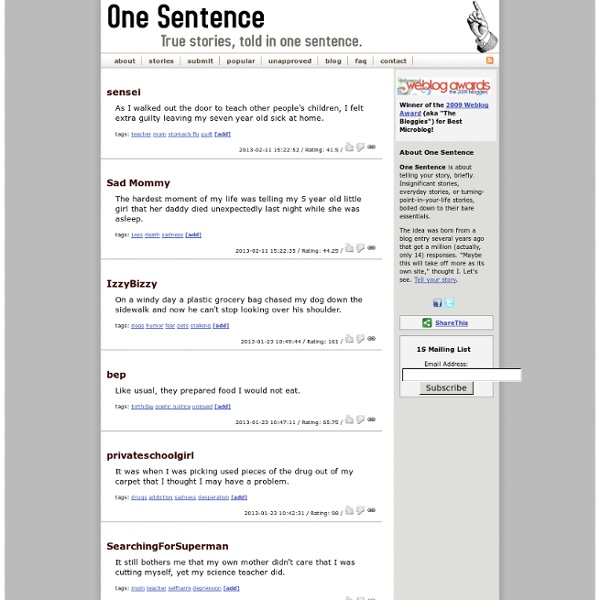 Louisreility We left for a two week holiday to see a few concerts in California and ended up three months later in a hostel in Guatemala city looking at a map, eating frozen chocolate bananas and asking each other if we knew where we were. tags: travel surprise [add] 2014-03-03 09:20:39 / Rating: 83.25 / Robert One of the saddest things I've ever saw was a little bird that had frozen to death perched on a tree branch alone.

Why Readers, Scientifically, Are The Best People To Fall In Love With Ever finished a book? I mean, truly finished one? Cover to cover. Expressions & Sayings Index If you prefer to go directly to the meaning and origin of a specific expression, click on its relevant entry in the alphabetical list below. Use this alphabet to speed up your search: A B C D E F G H I J K L M N O P Q R S T U V W X Y Z 5 Psych Experiments That Sounded Fun (Until They Started) So you see an ad in the paper from a lab looking for test subjects. They say they want to study the effects of getting high, or eating too much, or having sex. Oh, and they'll pay you to do all of those things. Why Do Cats Sleep So Much? Did You Know? Although they master the art of sleeping, they are light-sleepers. Their propensity to wake up at the slightest noise or touch is a genetic survival mechanism. They have the ability to wake up and be alert quickly.Sheldon Cooper's song from Big Bang Theory "Soft Kitty, Warm Kitty, Little ball of fur, Happy Kitty, Sleepy Kitty, purr, purr, purr..." perfectly sums up a cat's sleeping habits. Because that's all they need to fall into a deep slumber.

The Secret History of America The Greatest Conspiracy On Earth This May Be The Most Important Document You Ever Read In Your Life! Do you believe in a GRAND CONSPIRACY ? Do you believe Oswald acted alone ? Do you believe that government is corrupt ? If so, then to what DEGREE ? That may depend on how willing you are to open your eyes and mind to SEE. Things People Don't Usually Know about Cats All felines, be them wild or domesticated, are part of the very same family, the one called Felidae. The domesticated cat comes from a species of small-sized wild cats, called Felis Silvestris. The only feline which lives in packs is the lion. All the other felines are solitary hunters, they rather live on their own than go for a community life.