Read Books Online, Over 10000 Free Online Books For Everyone 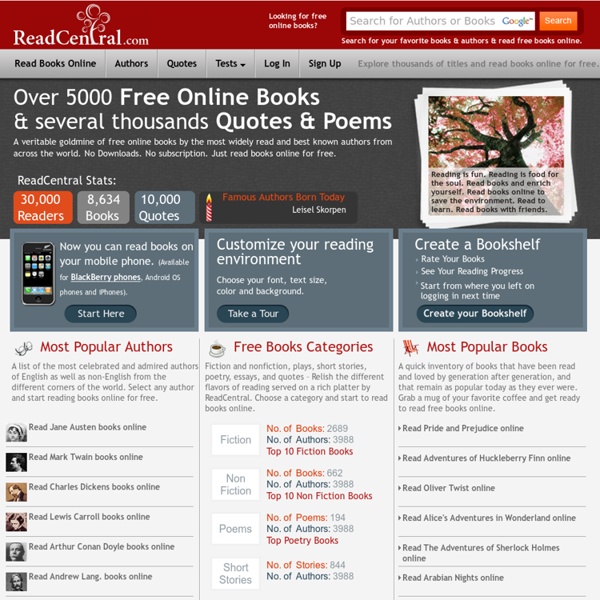 Free Books Categories Fiction and nonfiction, plays, short stories, poetry, essays, and quotes – Relish the different flavors of reading served on a rich platter by ReadCentral. Choose a category and start to read books online. Most Popular Books A quick inventory of books that have been read and loved by generation after generation, and that remain as popular today as they ever were. Grab a mug of your favorite coffee and get ready to read free books online.

Enter an Archive of 6,000 Historical Children's Books, All Digitized and Free to Read Online We can learn much about how a historical period viewed the abilities of its children by studying its children's literature. Occupying a space somewhere between the purely didactic and the nonsensical, most children’s books published in the past few hundred years have attempted to find a line between the two poles, seeking a balance between entertainment and instruction. However, that line seems to move closer to one pole or another depending on the prevailing cultural sentiments of the time. And the very fact that children’s books were hardly published at all before the early 18th century tells us a lot about when and how modern ideas of childhood as a separate category of existence began. “By the end of the 18th century,” writes Newcastle University professor M.O. Grenby, “children’s literature was a flourishing, separate and secure part of the publishing industry in Britain.”

Read The Passage Page 1 read free novels online Part I The road to death is a long march beset with all evils, and the heart fails little by little at each new terror, the bones rebel at each step, the mind sets up its own bitter resistance and to what end? The barriers sink one by one, and no covering of the eyes shuts out the landscape of disaster, nor the sight of crimes committed there. Pale Horse, Pale Rider Before she became the Girl from Nowhere-the One Who Walked In, the First and Last and Only, who lived a thousand years-she was just a little girl in Iowa, named Amy.

Free eBooks Online For Teens And Young Adults Introduction This is a listing of 66 sites that legally offer free ebooks for teens and young adults, for reading. There is a separate listing of free audiobooks in this genre at Refugee Audiobook by Alan Gratz Free Online Streaming [Total: 635 Average: 3.8/5] Since the time the violence has started over the different parts of the world, people have gone through pain, misery and numerous unknown and unbearable conditions that none could have imagined earlier. Alan Gratz brings to light to unleash the dangers, the pain and the hardships the three kids face while they travel to find peace in their lives on their way to meet their families abroad. The story is about three different kids from different parts of the world one a Jewish boy named Joseph who is in the Nazi Germany 1930 and is trying to seek refuge from the painful living there. Another kid who is a girl and is named Isabel is a Cuban in 1994 and is going on a raft with her family to seek refuge and peace in other parts of the world. The third kid is a Syrian boy in 2015 who has left his home after the destruction and is seeking to find refuge while on his way to the European countries.

National Literacy Trust Edited by Katherine Rundell, with contributions from more than 100 children’s writers and illustrators This extraordinary collection of short stories, poems, essays and pictures has contributions from more than 110 children’s writers and illustrators, including Lauren Child, Anthony Horowitz, Greg James and Chris Smith, Michael Morpurgo, Liz Pichon, Axel Scheffler, Francesca Simon and Jacqueline Wilson. The collection, published by Bloomsbury, is dedicated to the doctors, nurses, carers, porters, cleaners and everyone working in hospitals. The Book of Hopes is available as a beautiful hardback gift edition, with 23 never-seen-before stories, poems and illustrations.

Best Short Stories for Middle Schoolers, As Chosen by Teachers It can be a challenge to get middle schoolers interested in reading. The thought of tackling a thick novel can be overwhelming, especially toward the end of the school year when attention spans and patience for reading are often running short. Short stories are always a great choice.