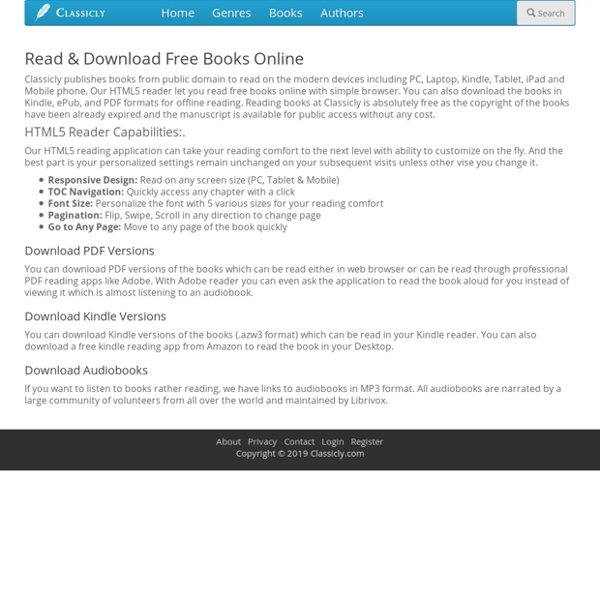 Book titles with full text online "The 1688 Paradise Lost and Dr. Aldrich": Metropolitan Museum Journal, v. 6 (1972) Boorsch, Suzanne (1972) 20th-Century Art: A Resource for Educators Paul, Stella (1999) 82nd & Fifth The Metropolitan Museum of Art (2013) About Founded in 2011, The Public Domain Review is an online journal and not-for-profit project dedicated to the exploration of curious and compelling works from the history of art, literature, and ideas. In particular, as our name sugggests, the focus is on works which have now fallen into the public domain, that vast commons of out-of-copyright material that everyone is free to enjoy, share, and build upon without restriction. Our aim is to promote and celebrate the public domain in all its abundance and variety, and help our readers explore its rich terrain – like a small exhibition gallery at the entrance to an immense network of archives and storage rooms that lie beyond.

Creative Writing Exercises - set your imagination free. Creative writing exercises are a great way to get started. Whether you are a beginner, or are an experienced writer these exercises will stimulate your mind and get your ideas flowing. I will be straight with you and tell you that very few people just start writing and straight away produce great results. We’ve all heard the stories about writers who find immediate success, however they are rare and that’s why those stories make headlines. Approaches to process writing What is process writing? Why should teachers be interested in a process approach to writing? The changing roles of teacher and students What stages are there in a process approach to writing?

Portals Download: Joomla Themes boasts six, individual and unique, Infuse, the October 2009 Club Template release, is an infusion of artistic flair and functionality. The themestyle variations, meticulously constructed to perfection. The theme is accompanied by 6 Style Variations, each with 3 different background options, culminating in a total of 18 possible combinations. NOTICE: Infuse is a Joomla 1.5 only template. The Harvard Classics: Download All 51 Volumes as Free eBooks Every revolutionary age produces its own kind of nostalgia. Faced with the enormous social and economic upheavals at the nineteenth century’s end, learned Victorians like Walter Pater, John Ruskin, and Matthew Arnold looked to High Church models and played the bishops of Western culture, with a monkish devotion to preserving and transmitting old texts and traditions and turning back to simpler ways of life. It was in 1909, the nadir of this milieu, before the advent of modernism and world war, that The Harvard Classics took shape. Compiled by Harvard’s president Charles W. Eliot and called at first Dr.

How And Why To Keep A “Commonplace Book” The other day I was reading a book and I came across a little anecdote. It was about the great Athenian general Themistocles. Before the battle of Salamis, he was locked in a vigorous debate with a Spartan general about potential strategies for defeating the Persians. Themistocles was clearly in the minority with his views (but which ultimately turned out to be right and saved Western Civilization). He continued to interrupt and contradict the other generals. Finally, the Spartan general threatened to strike Themistocles if he didn’t shut up and stop.

Unusual Words Unusual Words A by no means exhaustive list of rare, obscure, strange and sometimes funny words and their meanings that only seem to crop up in crosswords and dictionaries. Words that are used so seldom, you wonder who invented them and why. Alice In Wonderland Is A Mixture Of Reality And Fantasy: Not A Fairy-Tale Part 2. Time Warp & Spatio-Temporal Distortions, Etc. Fairy tale and fantasy: from archaic to postmodern.