Energy from the ocean (OTEC) 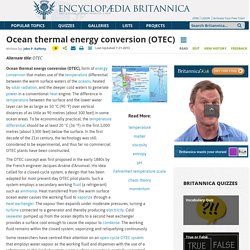 The difference in temperature between the surface and the lower water layer can be as large as 50 °C (90 °F) over vertical distances of as little as 90 metres (about 300 feet) in some ocean areas. To be economically practical, the temperature differential should be at least 20 °C (36 °F) in the first 1,000 metres (about 3,300 feet) below the surface. In the first decade of the 21st century, the technology was still considered to be experimental, and thus far no commercial OTEC plants have been constructed. The OTEC concept was first proposed in the early 1880s by the French engineer Jacques-Arsène d’Arsonval.

His idea called for a closed-cycle system, a design that has been adapted for most present-day OTEC pilot plants. OTEC Basics. A process called ocean thermal energy conversion (OTEC) uses the heat energy stored in the Earth's oceans to generate electricity. 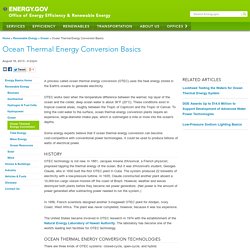 OTEC works best when the temperature difference between the warmer, top layer of the ocean and the colder, deep ocean water is about 36°F (20°C). These conditions exist in tropical coastal areas, roughly between the Tropic of Capricorn and the Tropic of Cancer. To bring the cold water to the surface, ocean thermal energy conversion plants require an expensive, large-diameter intake pipe, which is submerged a mile or more into the ocean's depths. Some energy experts believe that if ocean thermal energy conversion can become cost-competitive with conventional power technologies, it could be used to produce billions of watts of electrical power.

History OTEC technology is not new. In 1956, French scientists designed another 3-megawatt OTEC plant for Abidjan, Ivory Coast, West Africa. Why use OTEC? What is ocean thermocline (or OTEC) energy? 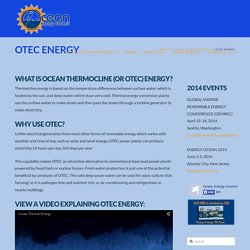 Thermocline energy is based on the temperature differences between surface water, which is heated by the sun, and deep water, which stays very cold. Thermal energy conversion plants use the surface water to make steam and then pass the steam through a turbine generator to make electricity. Why use OTEC? Unlike electrical generation from most other forms of renewable energy which varies with weather and time of day, such as solar and wind energy, OTEC power plants can produce electricity 24 hours per day, 365 days per year This capability makes OTEC an attractive alternative to conventional base load power plants powered by fossil fuels or nuclear fission. 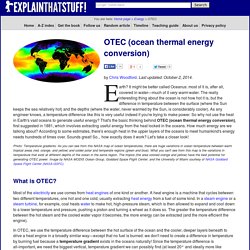 Last updated: October 2, 2014. Earth? It might be better called Oceanus: most of it is, after all, covered in water—much of it very warm water. The really interesting thing about the ocean is not how hot it is, but the difference in temperature between the surface (where the Sun keeps the sea relatively hot) and the depths (where the water, never warmed by the Sun, is considerably cooler). As any engineer knows, a temperature difference like this is very useful indeed if you're trying to make power.

Photo: Temperature gradients: As you can see from this NASA map of ocean temperatures, there are huge variations in ocean temperature between warm tropical areas (red, orange, and yellow) and colder polar and temperate regions (green and blue). What is OTEC? Most of the electricity we use comes from heat engines of one kind or another. Chart: How ocean temperature various with depth. How much power could OTEC make? How does OTEC work? Closed cycle Open cycle. Electricity from Ocean Waves. Is it possible? Details Written by Shalinee Kishore, Lawrence Snyder and Parth Pradhan The energy from ocean waves is a largely untapped resource that could play an important role in our electricity future. 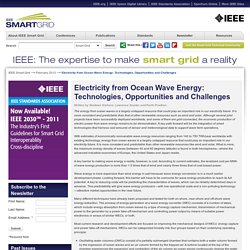 It is more consistent and predictable than that of other renewable resources such as wind and solar. Although several pilot projects have been successfully deployed worldwide, and some of them are grid-connected, the economic production of electric power from wave energy remains to be demonstrated. A key path forward will be the integration of smart technologies that harness vast amounts of sensor and meteorological data to support wave farm operations. With estimates of economically recoverable wave energy resources ranging from 140 to 750 TWh/year worldwide with existing technology, energy from ocean waves is a largely untapped resource that could play an important role in our electricity future. A key barrier to making wave energy a reality, however, is cost.