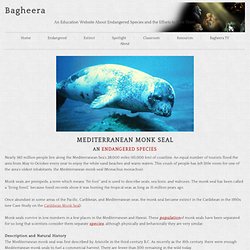 An equal number of tourists flood the area from May to October every year to enjoy the white sand beaches and warm waters. This crush of people has left little room for one of the area’s oldest inhabitants, the Mediterranean monk seal (Monachus monachus). Monk seals are pinnipeds, a term which means “fin foot” and is used to describe seals, sea lions, and walruses. The monk seal has been called a “living fossil,” because fossil records show it was hunting the tropical seas as long as 15 million years ago. Once abundant in some areas of the Pacific, Caribbean, and Mediterranean seas, the monk seal became extinct in the Caribbean in the 1950s (see Case Study on the Caribbean Monk Seal). Monk seals survive in low numbers in a few places in the Mediterranean and Hawaii. Description and Natural History The Mediterranean monk seal was first described by Aristotle in the third century B.C. 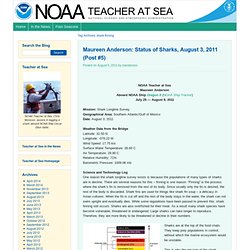 There are several reasons for this – finning is one reason. “Finning” is the process where the shark’s fin is removed from the rest of its body. There are different categories of extinction risk, from "least concern" to "extinct" (photo courtesy of IUCN) Leopard Seal. Antarctic (Cold Desert) Food Chain. Ocean Currents. Whales and antarctica food webs and food chains. Whales are the largest animals ever to have lived, larger even than the largest dinosaurs. 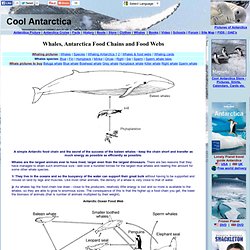 There are two reasons that they have managed to attain such enormous size - well over a hundred tonnes for the largest blue whales and nearing this amount for some other whale species. 1/ They live in the oceans and so the buoyancy of the water can support their great bulk without having to be supported and moved on land by legs and muscles. Like most other animals, the density of a whale is very close to that of water. 2/ As whales tap the food chain low down - close to the producers, relatively little energy is lost and so more is available to the whales, so they are able to grow to enormous sizes. Classroom@Sea » Cruises » JR161. JR161 aboard the RRS James Clark Ross (JCR) is the first of a series of three cruises to the Scotia Sea to study food-wed dynamics in Antarctica The Challenge Ocean food webs modify the efficiency with which carbon dioxide (CO 2 ) is absorbed from the atmosphere into the sea, gobbled up by phytoplankton in the surface layers and then transported down into the depths of the ocean. 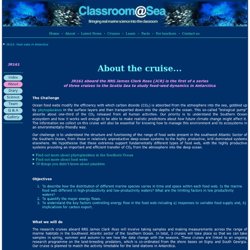 This so-called "biological pump" absorbs about one-third of the CO 2 released from all human activities. Our priority is to understand the Southern Ocean ecosystem and how it works well enough to be able to make realistic predictions about how future climate change might affect it. The information we collect on this cruise will also be essential for knowing how to manage this environment and its ecosystems in an environmentally-friendly way. Find out more about phytoplankton in the Southern Ocean Find out more about food webs 10 things you didn't know about plankton Objectives What we will do Key issues include: 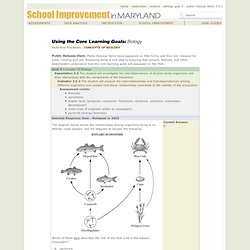 A diagram of a hydrothermal vent community is shown in the figure below. The organisms in this community live near heated vents. Inorganic compounds such as sulfides mix with extremely hot water when they are released from the vents. Bacteria use the sulfides to make food for themselves and other animals. Classroom@Sea » Learn.