Littering in the ocean 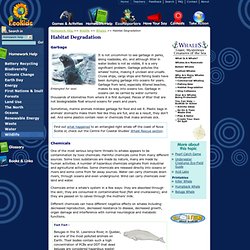 It is not uncommon to see garbage in parks, along roadsides, etc. and although litter in water bodies is not as visible, it is a very significant problem. Garbage pollutes the whales’ home, making it unclean and unsafe. Cruise ships, cargo ships and fishing boats have been dumping garbage into oceans for years. Garbage from land, especially littered beaches, makes its way into oceans too. Sometimes, marine animals mistake garbage for food and eat it. Chemicals One of the most serious long-term threats to whales appears to be contamination by toxic chemicals. Chemicals enter a whale’s system in a few ways: they are absorbed through the skin; they are consumed in contaminated food (fish and crustaceans); and they are passed on to calves through the mothers’ milk. Fast Fact : Belugas in the St. Noise Hearing is the most important sense to whales. To communicate, humpback whales can send sounds over hundreds of kilometres! Listen to more whale sounds.

Whales: Why Are Many Whales Endangered?:Fishing Gear. Many animals are victims of drift nets. 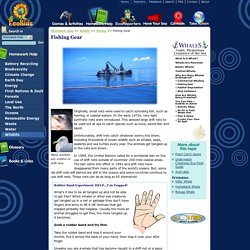 Originally, small nets were used to catch schooling fish, such as herring, in coastal waters. In the early 1970s, very light synthetic nets were introduced. This allowed large drift nets to be used out at sea to catch species such as tuna, sword fish and squid. Unfortunately, drift nets catch whatever swims into them, including thousands of ocean wildlife such as whales, seals, seabirds and sea turtles every year. The animals get tangled up in the nets and drown.

In 1989, the United Nations called for a worldwide ban on the use of drift nets outside of countries’ 200-mile coastal areas. Rubber Band Experiment: HELP...I',m Trapped! What's it like to be all tangled up and not be able to get free? Grab a rubber band and try this: Take the rubber band and loop it around your thumb. Imagine you are a whale that has become caught in a drift net or a piece of rope that someone has thrown into the ocean. Were you able to get it off? Why are people littering in ocean. RIP Ocean Pollution and Plastic Water Bottles. Marine litter - the ocean pollution. Oceans of Trash. Kids picking up trash on a beach. 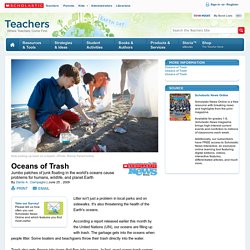 (Photo: Randy Faris/Corbis) Litter isn't just a problem in local parks and on sidewalks. It's also threatening the health of the Earth's oceans. According a report released earlier this month by the United Nations (UN), our oceans are filling up with trash. The garbage gets into the oceans when people litter. Trash also gets thrown into rivers that flow into oceans. The biggest concern about ocean trash is that most of it is plastic. Plastic can take up to 1,000 years to biodegrade, or break down into smaller parts, once it's thrown away. Danger to All People rarely see these garbage patches because they are created in areas of the ocean far away from land.

Plastic and other junk that ends up in the ocean can wash up on beaches. Humans can be affected by beach trash as well. Plastic can be deadly for animals that live in the ocean. How to Help Without urgent action, the UN says in its report, the ocean trash problem will only get worse. Risks to Oceans. There are three main ways that the ocean water quality is at risk. 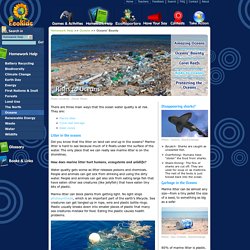 They are: Litter in the oceans Did you know that the litter on land can end up in the oceans? Marine litter is hard to see because much of it floats under the surface of the water. The only place that we can really see marine litter is on the shorelines. How does marine litter hurt humans, ecosystems and wildlife? Beach and ocean litter (Department of Environment and Heritage Protection) You're at your favourite beach wiggling your feet in the sand, sifting a handful of shells to look at, and listening to the seagulls' plaintive cries. 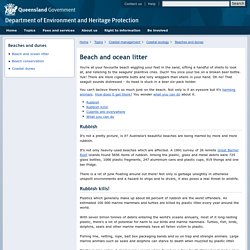 Ouch! You slice your toe on a broken beer bottle. Yuk! There are more cigarette butts and lolly wrappers than shells in your hand. Oh no! You can't believe there's so much junk on the beach. Rubbish ( ) Rubbish kills! Rubbish It's not a pretty picture, is it? It's not only heavily-used beaches which are affected. There is a lot of junk floating around out there! Rubbish kills! Plastics which generally make up about 60 percent of rubbish are the worst offenders. With seven billion tonnes of debris entering the world's oceans annually, most of it long-lasting plastic, there's a lot of potential for harm to our birds and marine mammals.

Fishing line, netting, rope, bait box packaging bands and so on trap and strangle animals. Save the Oceans From Pollution and Beach Litter!