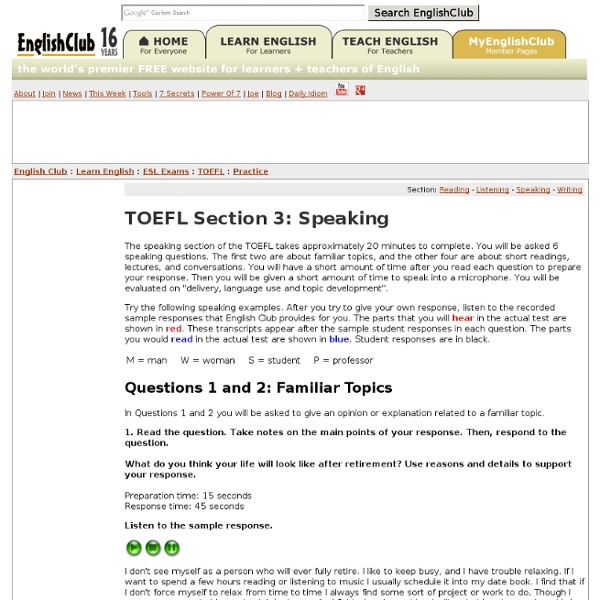 The speaking section of the TOEFL takes approximately 20 minutes to complete. You will be asked 6 speaking questions. The first two are about familiar topics, and the other four are about short readings, lectures, and conversations. You will have a short amount of time after you read each question to prepare your response. Then you will be given a short amount of time to speak into a microphone. You will be evaluated on "delivery, language use and topic development". Try the following speaking examples. Questions 1 and 2: Familiar Topics In Questions 1 and 2 you will be asked to give an opinion or explanation related to a familiar topic. 1. What do you think your life will look like after retirement? Preparation time: 15 seconds Response time: 45 seconds Listen to the sample response. I don't see myself as a person who will ever fully retire. 2. Would you prefer to study in a classroom or take an online course? Question 3 and 4 3. Reading time: 45 seconds. 4. Reading time: 45 seconds 5.

Free TOEFL Practice The Test of English as a Foreign Language (TOEFL) measures the ability of non-native speakers of English to use and understand North American English as it is spoken, written and heard in college and university settings. You have 20 minutes to do 20 questions. When you have completed the test you will get a score and you can review your answer to each question. Most people who take the TOEFL test are planning to study at colleges and universities where instruction is in English.

Reading Comprehension - Free Worksheets Home- English- Math - Reading - Research - Keys - Newsworthy - Links - Contact Reading Comprehension, Volume 5: Number 32, Word Meanings From Context Number 31, The Painting Number 30, Word Meanings From Context Number 29, Charity, Poem Academic Wordlist In this section you can do practice tests for all groups of the academic word list. The Academic Word List (AWL) was developed by Averil Coxhead at the School of Linguistics and Applied Language Studies at Victoria University of Wellington, New Zealand. The list contains 570 word families which were selected because they appear with great frequency in a broad range of academic texts. The list does not include words that are in the most frequent 2000 words of English (the General Service List), thus making it specific to academic contexts. The AWL was primarily made so that it could be used by teachers as part of a programme preparing learners for tertiary level study or used by students working alone to learn the words most needed to study at colleges and universities. The 570 words are divided into 10 Groups.

Podcasts in english ►Go to travelogues Follow the pie team on their travels and learn English along the way ►Go to pie plus Friendship Vocabulary spouse- husband or wife bond- connection, something that makes two things stick together twin spirit- someone very similar to you stranger- someone you don't know at all acquaintance- someone you don't know very well 25 BEST WEBSITES FOR LEARNING ENGLISH I want the new e-book! How do you learn English in your free time? Do you meet internationals in cafés, do you self-study using books, do you get on the internet? When it comes to learning many people have realized they are not going to acquire the language just by sitting in classrooms.

Using an English/English Dictionary Vocabulary wide choice- lots of different ones to choose from bilingual- two languages to be against- disagree with to look up- to search for something in a book Reading The First Americans In the 1970s, college students in archaeology such as myself learned that the first human beings to arrive in North America had come over a land bridge from Asia and Siberia approximately 13,000 to 13,500 years ago. These people, the first North Americans, were known collectively as Clovis people. Their journey was made possible, according to archaeologists far and wide, by a corridor that had opened up between giant ice sheets covering what is now Alaska and Alberta.

Drawing for Change: Analyzing and Making Political Cartoons Photo Political cartoons deliver a punch. They take jabs at powerful politicians, reveal official hypocrisies and incompetence and can even help to change the course of history. But political cartoons are not just the stuff of the past.