Chaos Astrology - Bringing order out of chaos. An exploration into the interconnected nature of the Universe. 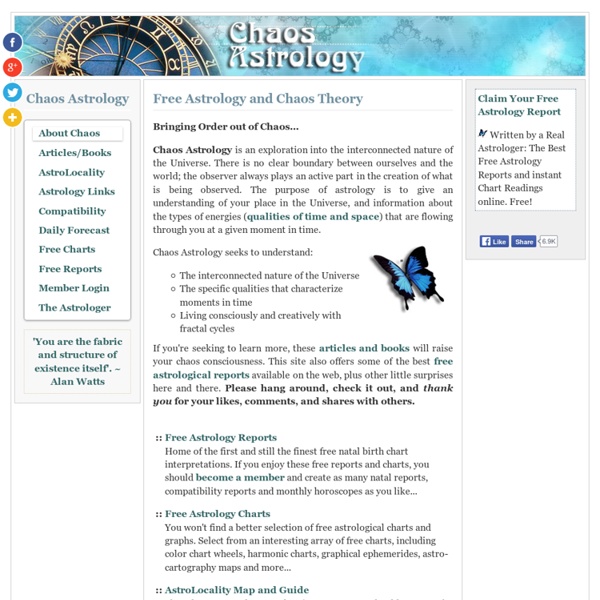 Chaos Quotes One man's idea of perfect order is another man's chaos. DEAN KOONTZ, Dark Rivers of the Heart War is the most readily available form of chaos. FRANK HERBERT, God Emperor of Dune Chaos is God's body. JOHN UPDIKE, Rabbit Redux Throughout human history, as our species has faced the frightening, terrorizing fact that we do not know who we are, or where we are going in this ocean of chaos, it has been the authorities — the political, the religious, the educational authorities — who attempted to comfort us by giving us order, rules, regulations, informing — forming in our minds — their view of reality. TIMOTHY LEARY, How to Operate Your Brain Order generally was a product of human activity. FRANK HERBERT, Chapterhouse: Dune In the space between chaos and shape there was another chance. JEANETTE WINTERSON, The World and Other Places There are men who bloom in chaos. GUILLERMO DEL TORO & CHUCK HOGAN, The Fall They sicken of the calm, who knew the storm. DOROTHY PARKER, New York World, Jan. 20, 1928

Bill Sheeran, Irish astrologer, Astrology Dublin, Ireland, Consultations Courses and Classes Self organisation - how networks bring order out of chaos | Dollywagon My last ‘Network Analytics’ post discussed the power of complexity and tried to prove that stuff like brains and social media are not that different when seen from the perspective of complex network science. I’m going to develop this thought a little further by looking at ‘self organising networks’, a phenomena sometimes described as ‘the Hand of God’. In my last post I said that the human brain *used* to be the most complex entity known to modern science. But recently something else has stolen the crown of being the universe’s number 1 complex network. This new King of Complexity was created just 20 years ago by an Englishman working in Switzerland. In just two short decades it has grown from literally nothing to approximately 100,000,000,000 (100 billion) pages of richly interconnected data, text, images and sound. The new king of complexity is of course the World Wide Web. There are many things about the Web that one could choose to be amazed by. How can such miracles happen?

Yod Aspect Pattern – Astrology King The Yod aspect pattern is a configuration between at least three planets or points in the horoscope to create a long triangle which looks like a witches hat. A Yod is also called the Finger of Fate, Finger of God or the Projection Triangle, and has been the source of much debate and controversy within the astrological community. Traditional astrologers have dismissed Yod astrology as “bogus” or merely a midpoint structure, and even among those who use Yod’s there is debate about orbs and whether to include only planets or other points in the chart like the Ascendant. I strongly believe that Yod astrology is very significant and does live up to the hype as a very fated aspect pattern denoting a special mission or destiny in life. Yod Astrology Definition Yod is the tenth Hebrew letter with significant kabbalistic and mystical significance regarding the name of God, his omnipresence and our humility. Yod Astrology Alan J. Boomerang Yod Astrology Boomerang Yod Astrology

Order out of Chaos Where you place your emphasis determines in large measure the quality and impact of your life. Consider this for a moment. Every situation that comes your way will contain a mixture of orderly and chaotic elements. Fear or react to the chaos and you will tend to perpetuate the chaos, if not add to it. Human beings are generally driven to bring order out of chaos. Rather than worry, complain about or dwell on the chaotic elements in your life, choose instead to apply your mental, emotional and physical energies in a way that eventually brings order out of the chaos. Those who excel at bringing order out of chaos are those who understand what to emphasize and what to downplay. Tagged as: bringing order out of chaos, emphasis, greg hake, gregg hake, gregory hake, living, quality of life

Sun or Moon Rise/Set Table for One Year Important! Please read the Notes section. This page provides a way for you to obtain a table of the times of sunrise/sunset, moonrise/moonset, or the beginning and end of twilight, for any year between 1700 and 2100. You can obtain a table for any location worldwide by following these simple steps: Decide on which form to use. Form A - U.S. Specify year, type of table, and place: Form B - Locations Worldwide Notes How to Print the Table The table is 134 characters wide, so to print it you must use landscape orientation and 8-point (smallest) type. How to Import the Table into a Spreadsheet Open your favorite text editor, then copy the numerical part of the table (i.e., do not copy the table headings) from your browser and paste it into the text editor. In Excel 2003, click Data on the menu bar, then Import External Data, then Import Data. In Excel 2007, click Data on the menu bar, then From Text. Definitions Time Zones Daylight Time Daylight time is not implemented in this program.

The Four Chaos Attractors - Fractal Wisdom The Science of Chaos has discovered four basic Cosmos Attractors: Point Attractor | Cycle Attractor | Torus Attractor | Strange Attractor Although known as the four "chaos attractors," they are really the opposite - they are Cosmos Attractors that balance chaos. The four "Attractors" bring order out of Chaos. They are part of a basic law of four - a "fractal of four." Everywhere we see a hidden order and similarity over scales, such as is that shown geometrically by the Mandelbrot and Julia sets. The four attractors act on all levels of reality to form Cosmos out of Chaos. In the computer the electric current automatically creates the iteration.

Understanding Vedic Astrology (Exaltation and Debilitation of Planets) - 3 (Blog 4) - RockingBaba Blog Planets, as previously explained in earlier blogs, gives results based on their placement against the Zodiac sign, the Nakshatra and the house they occupy. Each house in a birth chart has a significance. We have given a broad classification of the same in the table below. House Significance Each Zodiac sign has its own characteristics too and a planet can be in a state of exaltation or debilitation or be placed under a friendly sign or an enemy sign. Zodiac Sign Signification Using above tables and explanations given earlier we will try to understand the birth chart given below. We will conclude this blog here. Next blog on Phases of Moon – Shukla Paksha and Krishna Paksha

The Spirit of the Internet - Chapter 4 Technological Singularity "The universe may not only be stranger than we suppose; it may be stranger than we can suppose." J.B.S. Haldane In mathematics and science, a singularity is a point at which a function takes an infinite value and thus loses meaning in normal terms. In 1993, mathematics professor and award-winning writer Vernor Vinge presented a paper titled "Technological Singularity" at the VISION-21 Symposium sponsored by NASA's Lewis Research Center and the Ohio Aerospace Institute. Within thirty years, we will have the technological means to create superhuman intelligence. A few sentences later, he continued: I argue in this paper that we are on the edge of change comparable to the rise of human life on Earth. It is interesting to note that Vinge uses the phrase "creation by technology." Vinge went on to propose several alternative ways in which such a technological singularity could come about, which is another reason for having confidence that the event will occur: "STOP!"

ASTROLOGY: Eclipses posted February 12, 2014 07:48 AM Eclipses happen on the Nodes. Eclipses denote changes in the Life Tides. Events will occur in those areas ruled by Houses where the Transiting Nodes lie. When they Aspect a Key Point in your Natal chart it may be activated at these times. When there are Eclipses going on (that affect points in your Natal chart) they cause Events. When the Nodes cross things, they set them in motion. When the Sun comes to this point in the year, that means changes are happening in that particular area of life, so check to see what those Houses cover. Whatever Signs the Nodes are Transiting are the times of year we find Eclipses. Right now, it is at the Aries/Taurus and Libra/Scorpio Cusp. So, the Full Moon/New Moons in these Signs are the Eclipse Times of year. Pay attention to things occurring BETWEEN Eclipses, once one Eclipse has occurred, things are in the swing. Pay attention to things that happen every Six Months during these periods, as that is the recurrence of the Cycle.