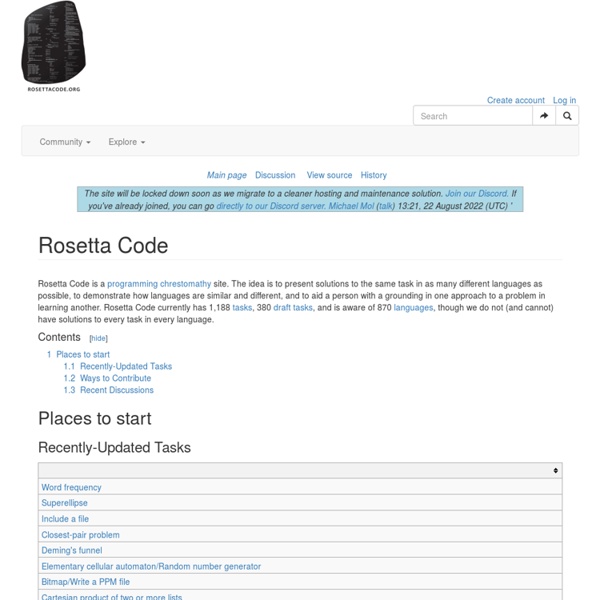 Introduction to UML2 Profiles Copyright 2004, 2008 International Business Machines Corp. Summary This article describes how to work with profiles using the UML2 plug-ins for Eclipse. In particular, it gives an overview of how to create and apply profiles (and their contents) both programmatically and by using the sample UML editor Kenn Hussey, IBM (Updated: for Eclipse 3.4; James Bruck) Prerequisites How I went from student to drop-out to software engineer Introduction I spent three years as a wellness and medicine major in college. Through a long and complicated series of events and realizations, I grew interested in computer science and, subsequently, software engineering. So, I decided to transfer schools and enter a Software Engineering undergraduate program.

Population count Population count You are encouraged to solve this task according to the task description, using any language you may know. The population count is the number of 1s (ones) in the binary representation of a non-negative integer. Population count is also known as pop count, popcount, sideways sum, and Hamming weight. Software - Regular Expressions One class of objects that some object oriented programming languages support is called Regular Expressions. These are basically patterns that can be used for string manipulation. The typical syntax for a regular expression involves placing the pattern code between slashes with optional characters after the trailing slash. A trailing i indicates that case should be ignored when processing the pattern and g indicates that the pattern should be processed global instead of stopping at the first occurrence, gi would indicate that the pattern should be processed globally ignoring case. The supported methods will depend on the programming language but a regular expression class will probably support the following methods and possibly many more: The most complex part of using regular expressions is in determining how to code the patterns (the part between the slashes).

VATSIM - Pilot Resource Centre (PRC) Navigation Charts and Flight Planning Tools Created and Maintained by Neil Dewson-Smyth and Chad Black Last update 070121 - MB There are hundreds of places that navigation charts can be found, both on the internet and at local flying shops. The links provided on this page are for flight simulation use only and are not posted for use in real world aviation. Please note that all links are to external websites over which we have no control. Sites may be VATSIM related or in many cases are real world AIP (Aeronautical Information Publication) mocl: Lisp for iPhone/iOS, Android, and other mobile platforms mocl is built around the idea that your application logic should live in Lisp, and your user interface code should be fully native to the platform — Obj-C or Java in the case of iOS and Android. This is not unlike the web, where your server logic is in one language (hopefully Lisp), and the client logic is in HTML/JavaScript. For example: We set up (using Apple's Xcode) an Objective-C event handler called onDoneTap that triggers when the 'Done' button is tapped. - (IBAction)onDoneTap:(id)sender { [[self view] endEditing:YES]; update_contact([_txtName text], [_txtMobile text], [_txtEmail text]); save_contacts(); ...

Paul Ford: What Is Code? A computer is a clock with benefits. They all work the same, doing second-grade math, one step at a time: Tick, take a number and put it in box one. Tick, take another number, put it in box two. Tick, operate (an operation might be addition or subtraction) on those two numbers and put the resulting number in box one. Tick, check if the result is zero, and if it is, go to some other box and follow a new set of instructions. You, using a pen and paper, can do anything a computer can; you just can’t do those things billions of times per second.

Searching Algorithms ‘Recent Articles’ on Searching Searching Algorithms are designed to check for an element or retrieve an element from any data structure where it is stored. Based on the type of search operation, these algorithms are generally classified into two categories: 80+ Best Free Hacking Tutorials Learning to become hacker is not as easy as learning to become a software developer. I realized this when I started looking for learning resources for simple hacking people do. Even to start doing the simplest hack on own, a hacker requires to have in depth knowledge of multiple topics. Why Storytelling Is The Ultimate Weapon In business, storytelling is all the rage. Without a compelling story, we are told, our product, idea, or personal brand, is dead on arrival. In his book, Tell to Win, Peter Guber joins writers like Annette Simmons and Stephen Denning in evangelizing for the power of story in human affairs generally, and business in particular. Guber argues that humans simply aren’t moved to action by “data dumps,” dense PowerPoint slides, or spreadsheets packed with figures. People are moved by emotion. The best way to emotionally connect other people to our agenda begins with “Once upon a time…”