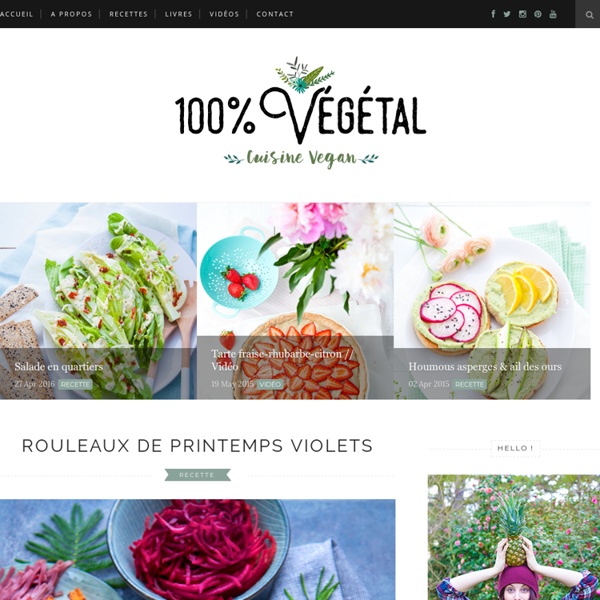 Vegan Salad in a Jar. Make-Ahead Bliss Salad. In a jar. I totally get this one. Japanese Maples Folklore, from Pond and Garden Nursery In Sonoma County, beautiful northern California - 6225 Stony Point Rd - corner hwy 116 and Stony Point, Cotati, 94931 Serving Sonoma County for 15 years ! New Shipment! Copyright 2007-2010 by Pond and Garden Nursery - All Rights Reserved Contact: info@pondandgardennursery.com Sun or Shade? Most cultivated varities thrive in full sun, though others prefer living in the shade.

Gourmet Traveller Magazine Mobile This well-travelled flatbread has made Malaysia its home where it's a joy to see created in the hands of a professional, but it's happily whipped up at home too, writes Tony Tan. Even though its roots are in southern India, there's no denying that Malaysia has made roti canai (pronounced chah-nigh, rhyming with hi) its own. Made with nothing more than flour, water, ghee and some salt and sugar, roti canai is a flatbread that came with the Malayalis and the Tamils to British Malaya, and Penang in particular, around the turn of last century. What I learned from a month of eating vegan A little more than a month ago, I expanded Team Greenie Pig to four and set out on a month-long challenge to eliminate animal products from our diets. Would we discover an entirely new way of eating? Experience a miraculous increase in vitality? Or crash and burn spectacularly over an irresistible salumi plate? And would any of us end up converting wholly to veganism? One thing we all agreed on: We learned a lot.

Joy the Baker — I feel like I’m grasping tight to the things around me these days. I’m probably the first to shrug off the change of season, the change of moving cities, and the change of traveling a ton as no big deal…. but it all adds up to matter and I have to admit I feel a little crazy in the brain. This season I’ve started a new workout routine. Since I’ve moved away from my beloved SoulCycle in California, I’ve started practicing Bikram Yoga in New Orleans. I’m terrible. Who knew bending could be so dang challenging? S'mores ice cream Wake up at 4:16AM, go back to sleep. Wake up exactly 45 minutes later, roll over and accidentally knee Thom in the ribcage. Don’t apologize because he’s asleep and what difference would it make, anyway? Scoot a little closer.

Irish Brown Yeast Bread This has to be one of the easiest bread recipies in the world with no kneading it’s a no brainer! The loaf can be frozen and defrosted when needed and is the perfect accompaniment to a hearty soup or made into a chunky sandwich. For anyone hooked on white bread this is a really healthy alternative and you can also add rolled oats sprinkled on top for an extra crunch. Makes one loaf 450g of wholemeal flour. 1 teaspoon of salt. 1 7g sachet of dried yeast. 1 teaspoon of treacle. 15 Fl Oz of warm water. A small handful of mixed seeds Homemade Marshmallow Spread - Flourish - King Arthur Flour So, my friends, instead of telling stories or sharing jokes this time around, let’s talk science. Specifically, let’s talk a little bit about the science of simple sugar syrups and their effects on egg whites. Oh, dear reader, please note that this is just the tip of the iceberg when it comes to egg and sugar science.

How We View the Masculinity of Vegan Men is Changing Currently, there seem to be more vegan men out there than ever before. More guys are being vocal about going plant-based for their health or choosing veganism for its ethics, which means there must be something different about how vegan men are perceived by the general population. Like every other progressive movement, however, things inch along slowly. Although, research is now finding evidence of shifting attitudes toward veg-minded men—especially in younger generations. Love This? Never Miss Another Story.

Chocolate Granola Bars I am not an outdoorsy person. When I was younger I tried to convince myself that I was. So many of my friends would plan camping trips, or river excursions, or hikes. I would pretend to be excited. Because I am what the world likes to refer to as a joiner. Camping out? Recipe swap: vegan For the Momo Wrapper 1 cup - all purpose flour 1/4 tsp - salt 1 tsp - sunflower oil water to knead the dough 24 Must-See Diagrams That Will Make Eating Healthy Super Easy 1. For fruit-ophiles. Photos by Grace Hitchcock for PopSugar / Via popsugar.com Creamy mushroom pasta with caramelized onions and spinach Follow Julia on Pinterest and Facebook to get more recipes and dinner ideas for your weekly meal planning! Creamy mushroom pasta sauce sounded really good on my first night at home, after I have traveled for business through 3 different states last week and have gone out to restaurants for dinner almost every single night for the last 10 days. Homemade pasta dishes are something I always crave after lots of traveling and eating out.

4 Vegan Breakfasts in 20 Minutes or Less When you picture a quick, vegan breakfast, what do you see? Maybe a sad bowl of oat bran cereal with rice milk or dry toast? I find that people who are hesitant about veganism often have a very 1970s view of what vegans eat. Luckily, we’ve come a long way in the last 40 years!