GitHub - camsas/firmament: The Firmament cluster scheduling platform. Cache2k. Java Caching Benchmarks 2016 - Part 1. Log in to Basecamp – Basecamp. End Point Blog. Using Docker for Development – The Basics. There’s been a lot of talk about how Docker can be used in conjunction with tools like Kubernetes to manage clusters of highly scalable microservices. 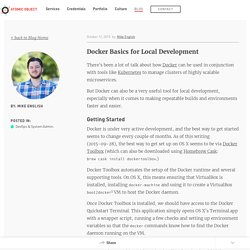 But Docker can also be a very useful tool for local development, especially when it comes to making repeatable builds and environments faster and easier. Getting Started. w4111. Psychosomatic, Lobotomy, Saw. Git from the inside out. This essay explains how Git works. 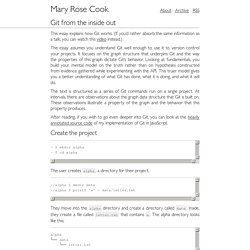 (If you’d rather absorb the same information as a talk, you can watch this video instead.) The essay assumes you understand Git well enough to use it to version control your projects. It focuses on the graph structure that underpins Git and the way the properties of this graph dictate Git’s behavior. Looking at fundamentals, you build your mental model on the truth rather than on hypotheses constructed from evidence gathered while experimenting with the API. This truer model gives you a better understanding of what Git has done, what it is doing, and what it will do. The text is structured as a series of Git commands run on a single project.

PackageManagementTools · golang/go Wiki. This page contains a list of tools for managing Go packages and their dependencies (vendoring). 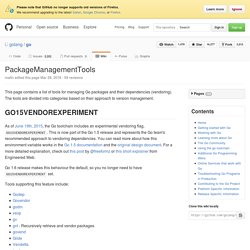 The tools are divided into categories based on their approach to version management. As of June 19th, 2015, the Go toolchain includes an experimental vendoring flag, GO15VENDOREXPERIMENT. This is now part of the Go 1.5 release and represents the Go team's recommended approach to vendoring dependencies. How We Built Uber Engineering’s Highest Query per Second Service Using Go - Uber Engineering Blog. In early 2015 we built a microservice that does one thing (and does it really well), geofence lookups. 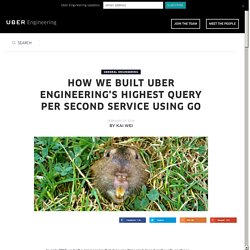 One year later, this service is Uber’s highest queries per second (QPS) service out of the hundreds we run in production. Here’s the story of why we built this service, and how the relatively recent Go programming language helped us build and scale it so fast. Background. Smq/hackernews-links-in-comments.md at master · antontarasenko/smq. GitHub - tj/luna: luna programming language - a small, elegant VM implemented in C. PnL Explained Professionals Home Page. Go by Example. Workiva. S Eyes: Eyes on Exoplanets. Get set for launch. 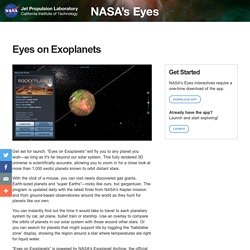 “Eyes on Exoplanets” will fly you to any planet you wish—as long as it's far beyond our solar system. This fully rendered 3D universe is scientifically accurate, allowing you to zoom in for a close look at more than 1,000 exotic planets known to orbit distant stars. Jupyter Notebook Viewer. GitHub - bytedeco/javacpp: The missing bridge between Java and native C++ Sorties/heapsort.c at master · pfac/sorties. Google/seesaw: Seesaw v2 is a Linux Virtual Server (LVS) based load balancing platform. Hacking up a test environment for InfluxDB and Jepsen – the refactorium. 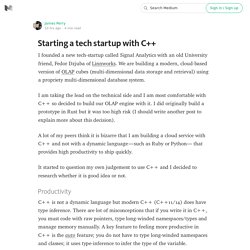 We are building a modern, cloud-based version of OLAP cubes (multi-dimensional data storage and retrieval) using a propriety multi-dimensional database system. I am taking the lead on the technical side and I am most comfortable with C++ so decided to build our OLAP engine with it. DevStash. DevStash. Commands And Arguments. Phew! 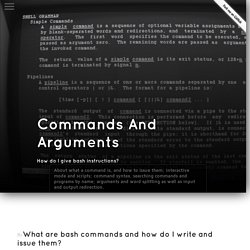 That was a lot all at once. Most of this might have gone over your head - that's fine. What’s in a web browser. The New World The existing architecture, based on display lists, had some definitive advantages, as explained previously. 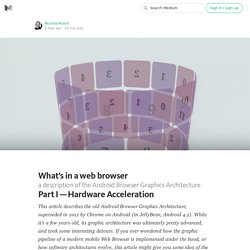 But things were also starting to look… worrying, on the performance front. The biggest apparent problem was that, while the display list approach was faster than having webkit directly paint, and was saving us countless round-trips to webkit, the speed at which we could paint the screen was still entirely dependent on the complexity of the content we wanted to display. It makes sense — more content meant more drawing instructions, more stuff to paint. Distelli. Srvdir. Usage Serve the current directory The simplest usage of srvdir is to serve the files in the current directory. 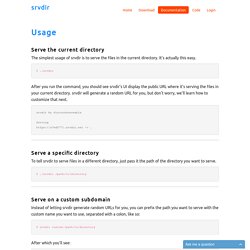 It's actually this easy. Documentation/developer at master · mrmanc/documentation. Use the Unofficial Bash Strict Mode (Unless You Looove Debugging) Let's start with the punchline. 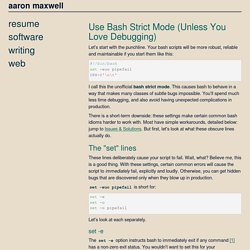 Your bash scripts will be more robust, reliable and maintainable if you start them like this: Arnaud Bailly - Anatomy of a Haskell-based Application. Posted on November 16, 2015 This is the first post of a series I am planning to write about my experience developing software as CTO of Capital Match, a Singapore-based startup providing a peer-to-peer lending marketplace for Small and Medium Businesses and private and corporate investor. This post is about the design and architecture of the system itself, the choices and tradeoffs that were made, whether good or bad. In the conclusion I try to provide an assessment of the current situation and reflect on those choices.

Haskell Basing Capital Match’s tech stack on Haskell was an obvious choice for me from the onset, even if I had had limited professional experience with Haskell before that: Event Sourcing The system was designed from the onset as an event-sourced application: The source of truth in the system is a sequence of events where each event defines a transition between two states. Models. Features - Ledger. Ledger is a powerful, double-entry accounting system that is accessed from the UNIX command-line. This may put off some users, as there is no flashy UI, but for those who want unparalleled reporting access to their data, there really is no alternative.

Here are some of the features of Ledger which set it apart from other accounting systems: Ledger never creates or modifies your data. Swipe. FIX Adapter Reference Help: Message structure: message body. About the message body The message body contains data specific to the particular message. Common components in messages Many messages share a common set of tags.