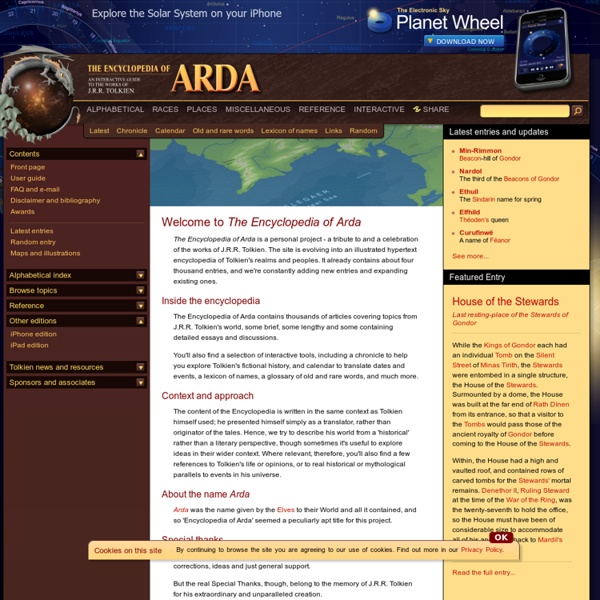 The Encyclopedia of Arda is a personal project - a tribute to and a celebration of the works of J.R.R. Tolkien. The site is evolving into an illustrated hypertext encyclopedia of Tolkien's realms and peoples. It already contains about four thousand entries, and we're constantly adding new entries and expanding existing ones. Inside the encyclopedia The Encyclopedia of Arda contains thousands of articles covering topics from J.R.R. You'll also find a selection of interactive tools, including a chronicle to help you explore Tolkien's fictional history, and calendar to translate dates and events, a lexicon of names, a glossary of old and rare words, and much more. Context and approach The content of the Encyclopedia is written in the same context as Tolkien himself used; he presented himself simply as a translator, rather than originator of the tales. About the name Arda Special thanks But the real Special Thanks, though, belong to the memory of J.R.R.

Top 15 Science Fiction Book Series - Top 10 Lists | Listverse Books Nothing is better than finishing a brilliant science fiction novel knowing that it is only the first in a series. Some of the greatest minds in sci-fi have used the series format to create complex and thrilling universes for their story characters to exist in, while others have created dystopian (and utopian) future environments on earth. This list takes the best of the science fiction series genre and attempts to rank them – a difficult (and obviously subjective) task. For your reading pleasure, here are the 15 greatest science fiction book series. Vorkosigan Saga Lois McMaster Bujold The bulk of the Vorkosigan Saga concerns Miles Vorkosigan, a disabled aristocrat from the planet Barrayar whose entire life is a challenge to the prejudices of his native planet against “mutants”. Wikipedia | Amazon The Book of the New Sun Gene Wolfe Wikipedia | Amazon Hyperion Cantos Dan Simmons Simmons’ Cantos is one of the most well known science fiction series of the last two decades. Wikipedia | Amazon

WOTSUMMARY.COM - The Wheel of Time Summary The Last Answer | Thrivenotes The Last Answer by Isaac Asimov — © 1980 Murray Templeton was forty-five years old, in the prime of life, and with all parts of his body in perfect working order except for certain key portions of his coronary arteries, but that was enough. The pain had come suddenly, had mounted to an unbearable peak, and had then ebbed steadily. He could feel his breath slowing and a kind of gathering peace washing over him. There is no pleasure like the absence of pain – immediately after pain. He opened his eyes and noted with distant amusement that the others in the room were still agitated. Now, with the pain gone, the others were still hovering, still anxious, still gathered about his fallen body –– Which, he suddenly realised, he was looking down on. He was down there, sprawled, face contorted. He thought: Miracle of miracles! And although that was a humiliating way for an atheistic physicist to die, he felt only the mildest surprise, and no alteration of the peace in which he was immersed. “Yes.”

Top 10 Underrated Fantasy Stories Before 1937 - Top 10 Lists | Listverse Books J.R.R. Tolkien changed the face of the fantasy genre when he published “The Hobbit” in 1937 and subsequently his famous “Lord of the Rings” trilogy. But with this defining moment in the genre, many of the great works that preceded Tolkien have been forgotten in time. Lud-in-the-Mist by Hope Mirrlees Publication Date: 1926 Probably the most obscure thing I shall mention on this list, this is a rather interesting tale in an alternate world where some rather mundane people live in peace, but are interrupted by a flow of fairy fruit form the neighboring lands. The Water-Babies by Charles Kingsley Publication Date: 1863 This is a children’s novel that I might not recommend for the kids, but anybody with an interest in Victorian fairy tales and a bit of controversy absolutely must pick this one up. The House on the Borderland by William Hope Hodgson Publication Date: 1908 Lost Horizon by James Hilton Publication Date: 1933 The Princess and the Goblin by George MacDonald Publication Date: 1872

Brave New World by Aldous Huxley Chapter One A SQUAT grey building of only thirty-four stories. Over the main entrance the words, CENTRAL LONDON HATCHERY AND CONDITIONING CENTRE, and, in a shield, the World State's motto, COMMUNITY, IDENTITY, STABILITY. The enormous room on the ground floor faced towards the north. Cold for all the summer beyond the panes, for all the tropical heat of the room itself, a harsh thin light glared through the windows, hungrily seeking some draped lay figure, some pallid shape of academic goose-flesh, but finding only the glass and nickel and bleakly shining porcelain of a laboratory. "And this," said the Director opening the door, "is the Fertilizing Room." Bent over their instruments, three hundred Fertilizers were plunged, as the Director of Hatcheries and Conditioning entered the room, in the scarcely breathing silence, the absent-minded, soliloquizing hum or whistle, of absorbed concentration. "Just to give you a general idea," he would explain to them. Meanwhile, it was a privilege.

A planetary map of the entire Star Wars universe @sephycloneno15: yeah, and considering it takes like 20 minutes to get to Tatooine from Coruscant, you'd think someone in the Core area would've popped over there by now and mapped it. In the star wars universe, that sounds like something you could finish over a weekend. @1Grand_Marquis: The implication is that mapping new Hyperspace routes is dangerous, time-consuming, and involves a whole lot of trial and error before anything meaningful happens. Although, considering that at least a dozen unique species from the UR are reasonably well-known in the rest of the Galaxy (or at the least have a couple thousand individuals living in the known parts of the Galaxy), it's rather surprising that none of them have brought maps of their regions of the Galaxy with them . @sephycloneno15: Yeah, I guess the idea is that you have to go searching using either sublight speeds, or by doing mini-hyperspace jumps, to make sure you avoid planets, asteroids, black holes, potatoes, tennis shoes, etc.

Science Fiction and Fantasy Book Reviews The Top 10 Best Science Fiction Books Before the comments fill up with “Why didn’t you include this” and various slights against our personal and professional integrity, this is just a list of ten great science fiction novels, not in order, and by no means the top ten ever produced. ‘Ten of the best’, not ‘the ten best’. That being said, please post up your own favourites, as we’re always looking for new things to read. 10. Heinlein’s elegantly constructed novel evokes some of the finest traditions in science fiction, with a near-future setting on the mongrel colony of Luna, which is preparing its revolution against the tyrannical rule of Earth. 9. | Kindle Edition Card’s seminal novel has been in and out of the news since its release, whether it’s for the long-mooted (and finally killed) idea of a film adaptation, through to the graphic novel version, through to it being a set text at US military academies. 8. 7. | Kindle Edition 6. | Kindle Edition 5. | Kindle Edition 4. | Kindle Edition 3. | Kindle Edition 2. 1. More Top 10s: