An unfilled down gap following a recent 50 day high close often creates a binary situation - InvestiQuant. SP-Rallies-10-Percent-Drawdown-50s.png (578×453) Mb50's "Liquid Mud" Rant. In Part 1 of this series, Is This The Best Stock Market Indicator Ever? 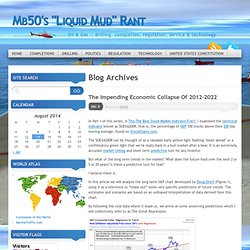 , I examined the technical indicator known as $OEXA200R, that is, the percentage of S&P 100 stocks above their 200 day moving average, found on StockCharts.com. The $OEXA200R can be thought of as a valuable early yellow light flashing ‘bears ahead’ or a confirmatory green light that we’re really back in a bull market after a bear. It is an extremely accurate market timing and short term predictive tool for any investor. Netviðskipti með CFD samninga, Plus500 verkvangur fyrir gjaldeyrisviðskipti, hrávörur, CFD samninga, skuldabréf, hlutabréf, fjármagn, verðbréf, vísitölur. Worst Time in Presidential Cycle Begins Now. - Downside Hedge – Portfolio Allocation, Hedging Strategies, and Twitter Stock Market Indicators. 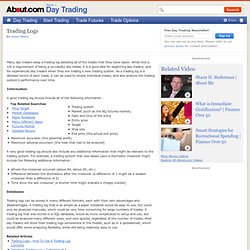 While this is not a requirement of being a successful day trader, it is a good idea for beginning day traders, and for experienced day traders when they are trading a new trading system. Michael Arold: The Value of Chart-based Trading Journals. One of the most potentially explosive stock charts I have seen in some time PeterLBrandt PeterLBrandt. I am a technical trader, relying on price charts. 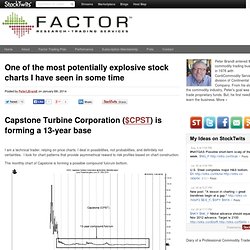 I deal in possibilities, not probabilities, and definitely not certainties. I look for chart patterns that provide asymmetrical reward to risk profiles based on chart construction. The monthly chart of Capstone is forming a possible compound fulcrum bottom. This is a rare bottom. Classical charting principles as a tool for trading is based on the fact certail chart patterns reoccur over time with somewhat predictable results. This pattern is NOT a bottom until certain price levels above the market are penetrated with heavy volume. Stock Trader's Almanac - Investor Alert: May 13, 2010. The Great Recession likely ended in the third quarter of 2009. 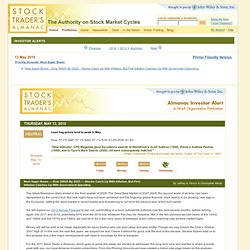 The Great Bear Market of 2007-2009, the second worst of all time, has been stampeded by the current bull. But new highs have not been achieved and the lingering global financial crisis seems to be growing new legs in the Eurozone, rattling the stock market in recent weeks and threatening to cut short the second year of this bull market. We still expect our 2010 Annual Forecast to pan out, culminating in a more substantial pullback over the next several months, before rallying again into 2011 and 2012, potentially 50% from the 2010 low, whatever that may be. Yahoo ticker download google docs - Google leit. Paying Yourself First » Rogue Traderette. Leading Investment Indicators. Nearly a year ago (in October) I looked at long-term indicators of how rich or cheap the market was at that time. 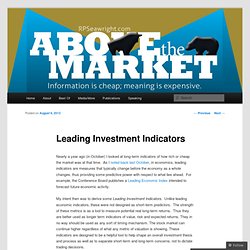 As I noted back last October, in economics, leading indicators are measures that typically change before the economy as a whole changes, thus providing some predictive power with respect to what lies ahead. For example, the Conference Board publishes a Leading Economic Index intended to forecast future economic activity. Chart of the Day: Follow the Money. 4 Classic Elements of Mastery - The Traders Journal. Mastery is not achieved by knowing the Holy Grail of trading systems. 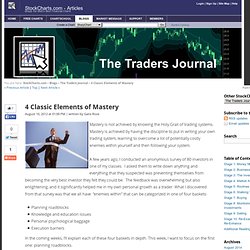 Mastery is achieved by having the discipline to put in writing your own trading system, learning to overcome a lot of potentially costly enemies within yourself and then following your system. A few years ago, I conducted an anonymous survey of 80 investors in one of my classes. I asked them to write down anything and everything that they suspected was preventing themselves from becoming the very best investor they felt they could be. The feedback was overwhelming but also enlightening, and it significantly helped me in my own personal growth as a trader. 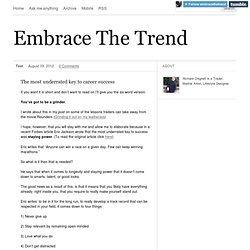 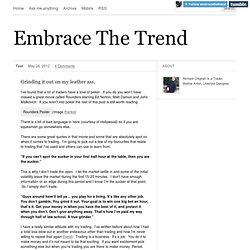 I’ve found that a lot of traders have a love of poker. If you do you won’t have missed a great movie called Rounders starring Ed Norton, Matt Damon and John Malkovich. If you aren’t into poker the rest of this post is still worth reading. Welcome To Estimize. Trading 101: Beware of the Gambler's Fallacy. One of the most difficult aspects of trading (or investing, for that matter) is overcoming our own cognitive biases–the very flaws that are inherent within each and every one of us. 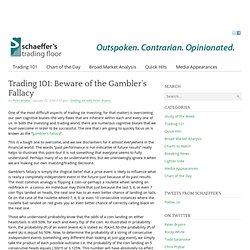 In both the investing and trading world, there are numerous cognitive biases that we must overcome in order to be successful. The one that I am going to quickly focus on is known as the “gambler’s fallacy“. This is a tough one to overcome, and we see disclaimers for it almost everywhere in the Financial world.

The words “past performance is not indicative of future results” really helps to illustrate this point–but it is not something that everyone seems to fully understand. Investing.com - Stock Market Quotes, Forex, Financial News. Economy: The hole in US employment. By Colin Twiggs February 11th, 2014 10:30 p.m. 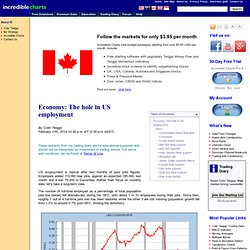 ET (2:30 p:m AEDT) These extracts from my trading diary are for educational purposes and should not be interpreted as investment or trading advice. Full terms and conditions can be found at Terms of Use. Technical Traders Ltd. - Partner Program. Wise investing for health & wealth. Why Coffee Futures Could Keep Going Up [Starbucks Corporation] Coffee futures spiked big in recent months mainly on back of the news that Brazil's production could fall.

The following comes from the International Coffee Organization's Monthly Report, located here: "Much of the recent price support has been due to speculation over the size of the upcoming Brazilian crop. The first estimate by Conab of the 2014/15 crop gives a forecast of 46.53 to 50.15 million bags, with an average of 48.34 million. Coffee prices set to rise as Brazil drought hits bean supply. Percolating: Prepare to pay more for a cup of coffee as supply costs rise. Photo: Craig Abraham The price of a morning caffeine hit is set to become more costly, rising 10¢ to 60¢ a cup, as a drought on the other side of the world threatens global coffee supplies. Trendlines on Logarithmic Scale Charts - All Star Charts with JC Parets. Why Arithmetic Stock Charts Are Worthless. Trend Lines. Technical analysis is built on the assumption that prices trend. Warren Buffett's 5 Lessons for Retirees. Last week Warren Buffett chaired the annual meeting for Berkshire Hathaway, a famously successful conglomerate of businesses and corporate interests based in Omaha, Neb.

Buffett is a legendary investor who over the years has made billions of dollars for himself and his fellow investors. StockScouter Rating System. TraderFeed: Becoming a Better Trader by Becoming a Better Thinker. Bank of England warns of huge financial risk from fossil fuel investments. Insurance companies could suffer a “huge hit” if their investments in fossil fuel companies are rendered worthless by action on climate change, the Bank of England warned on Tuesday. “One live risk right now is of insurers investing in assets that could be left ‘stranded’ by policy changes which limit the use of fossil fuels,” said Paul Fisher, deputy head of the bank’s prudential regulation authority (PRA) that supervises banks and insurers and is tasked with avoiding systemic risks to the economy. “As the world increasingly limits carbon emissions, and moves to alternative energy sources, investments in fossil fuels – a growing financial market in recent decades – may take a huge hit,” Fisher told an insurance conference.

Traders are snapping up calls in uranium producers as Japan prepares to reopen nuclear reactors damaged in the 2011 earthquake and tsunami. About 2,000 October 15 calls were purchased in the Global X Uranium Fund for $0.40 on Friday, according to optionMONSTER's Heat Seeker tracking program. Design and trade algorithmic trading strategies in a web browser, with free financial data, cloud backtesting and capital - QuantConnect.com.