Kaggle: Your Home for Data Science. R-exercises – Two Way ANOVA in R Exercises. One way analysis of variance helps us understand the relationship between one continuous dependent variable and one categorical independent variable. 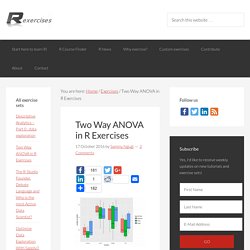 The dependent variable is the number of moths in a trap. Exercise 1 Exercise 2. R Tutorial — R Tutorial. 321a Boyd Graduate Studies University of Georgia Athens, Georgia 30602 Introductory Materials¶ These materials are designed to offer an introduction to the use of R. 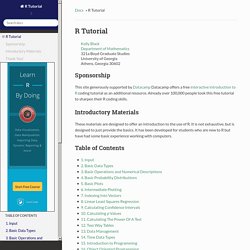 It is not exhaustive, but is designed to just provide the basics. Thank You! I have received a great deal of feedback from a number of people for various errors, typos, and dumb things. R Introduction. We offer here a couple of introductory tutorials on basic R concepts. 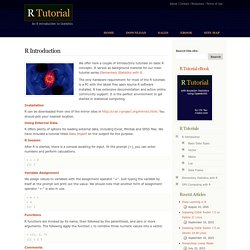 It serves as background material for our main tutorial series Elementary Statistics withR. The only hardware requirement for most of the R tutorials is a PC with the latest free open source R software installed. R has extensive documentation and active online community support. It is the perfect environment to get started in statistical computing. Installation R can be downloaded from one of the mirror sites in You should pick your nearest location. R Introduction. BestFirstRTutorial. Data Science Courses: R & Python Analysis Tutorials. A Complete Tutorial to learn Data Science in R from Scratch. Introduction R is a powerful language used widely for data analysis and statistical computing. 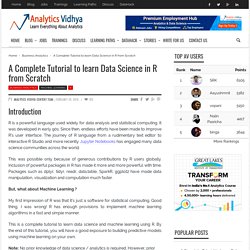 It was developed in early 90s. Since then, endless efforts have been made to improve R’s user interface. The journey of R language from a rudimentary text editor to interactive R Studio and more recently Jupyter Notebooks has engaged many data science communities across the world. This was possible only because of generous contributions by R users globally. But, what about Machine Learning ? IBM Data Scientist Workbench. R 101 (by DataCamp) - Big Data University. About This Course Master the basics of the R open source language, such as factors, lists and data frames. 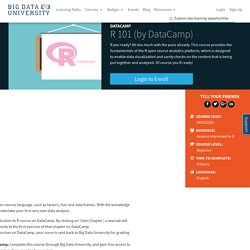 With the knowledge gained, you will be ready to undertake your first very own data analysis. Get access to the Introduction to R course on DataCamp. By clicking on 'Start Chapter', a new tab will open that takes you directly to the first exercise of that chapter on DataCamp.When you complete exercises on DataCamp, your score is sent back to Big Data University for grading purposes.Special offer by Datacamp: Complete this course through Big Data University, and gain free access to the entire DataCamp catalog of courses for two weeks! Course Syllabus Module 1 - Intro to BasicsModule 2 - VectorsModule 3 - MatricesModule 4 - FactorsModule 5 - Data FramesModule 6 - Lists General Information This course is free.It is self-paced.It can be taken at any time.It can be audited as many times as you wish. 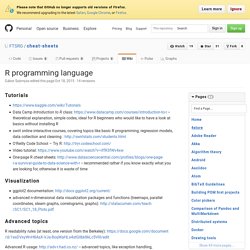 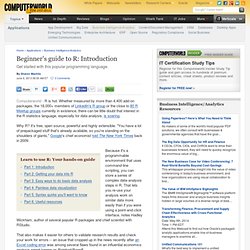 Whether measured by more than 4,400 add-on packages, the 18,000+ members of LinkedIn's R group or the close to 80 R Meetup groups currently in existence, there can be little doubt that interest in the R statistics language, especially for data analysis, is soaring. Why R? It's free, open source, powerful and highly extensible. "You have a lot of prepackaged stuff that's already available, so you're standing on the shoulders of giants," Google's chief economist told The New York Times back in 2009.

Because it's a programmable environment that uses command-line scripting, you can store a series of complex data-analysis steps in R. That also makes it easier for others to validate research results and check your work for errors -- an issue that cropped up in the news recently after an Excel coding error was among several flaws found in an influential economics analysis report known as Reinhart/Rogoff. Sure, you can easily examine complex formulas on a spreadsheet. Cheatsheets – RStudio.