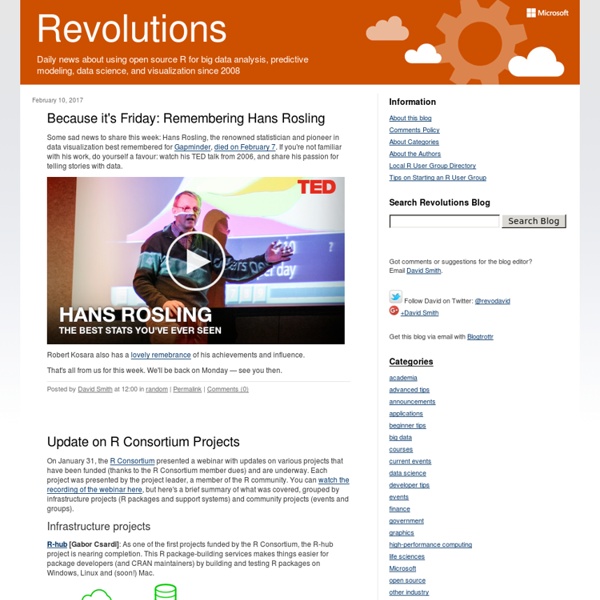 by Mike Bowles Mike Bowles is a machine learning expert and serial entrepreneur. This is the second post in what is envisioned as a four part series that began with Mike's Thumbnail History of Ensemble Models. One of the main reasons for using R is the vast array of high-quality statistical algorithms available in R. Ensemble methods provide a prime example. As statistics researchers have advanced the forefront in statistical learning, they have produced R packages that incorporate their latest techniques.

ModernDive Getting Started - For Students This book was written using the bookdown R package from Yihui Xie (Xie 2016). In order to follow along and run the code in this book on your own, you’ll need to have access to R and RStudio. Introduction to Genetic Algorithms in C# Posted on Tuesday May 14, 2013 Get the code A long time ago I mentioned in this post that I was planning on writing up some notes I made at university about Genetic Algorithms (from now on, known as GAs) and my version of a very simple example in C#. Years later…here it is! C# isn’t the most popular choice for artificial or natural intelligence programming, that job is largely the domain of Java or other more academic friendly languages. This means there aren’t a great deal of C# examples out there for neural networks, search and genetic algorithms and programming.

R Programming - Manuals R Basics The R & BioConductor manual provides a general introduction to the usage of the R environment and its basic command syntax. Code Editors for R Several excellent code editors are available that provide functionalities like R syntax highlighting, auto code indenting and utilities to send code/functions to the R console. Programming in R using Vim or Emacs Programming in R using RStudio Integrating R with Vim and Tmux An Introduction to R Table of Contents This is an introduction to R (“GNU S”), a language and environment for statistical computing and graphics. R is similar to the award-winning1 S system, which was developed at Bell Laboratories by John Chambers et al. It provides a wide variety of statistical and graphical techniques (linear and nonlinear modelling, statistical tests, time series analysis, classification, clustering, ...). This manual provides information on data types, programming elements, statistical modelling and graphics.

Top Programming Languages Trends: The Rise of Big Data Now that IEEE Spectrum is into the third year of annually ranking languages, we can start looking at some trends over time. What languages are ascendant? Which are losing traction? And which of the data sources that we use to create our rankings are contributing the most to these shifts? SQL Server 2016 R Services: Guide for Server Configuration By: Koen Verbeeck | Read Comments (3) | Related Tips: More > SQL Server 2016 Problem SQL Server 2016 comes with the integration of the popular language R into the database engine. This feature has been introduced in SQL Server 2016 preview CTP3.0 and is called SQL Server R Services. This tip will guide you through the set-up and configuration of the server components.

Programming in R The R languageData structuresDebuggingObject Oriented Programming: S3 ClassesObject Oriented Programming: S3 ClassesData storage, Data import, Data exportPackagesOther languages(Graphical) User InterfaceWeb interface: RpadWeb programming: RZopeWeb servicesClusters, parallel programmingMiscellaneousNumerical optimizationMiscellaneousDirty Tricks In this part, after quickly listing the main characteristics of the language, we present the basic data types, how to create them, how to explore them, how to extract pieces of them, how to modify them. We then jump to more advanced subjects (most of which can -- should?

Visualization The followings introductory post is intended for new users of R. It deals with interactive visualization using R through the iplots package. This is a guest article by Dr. Robert I. Kabacoff, the founder of (one of) the first online R tutorials websites: Quick-R.