Chemistry is EASY! How do you write electron configurations? 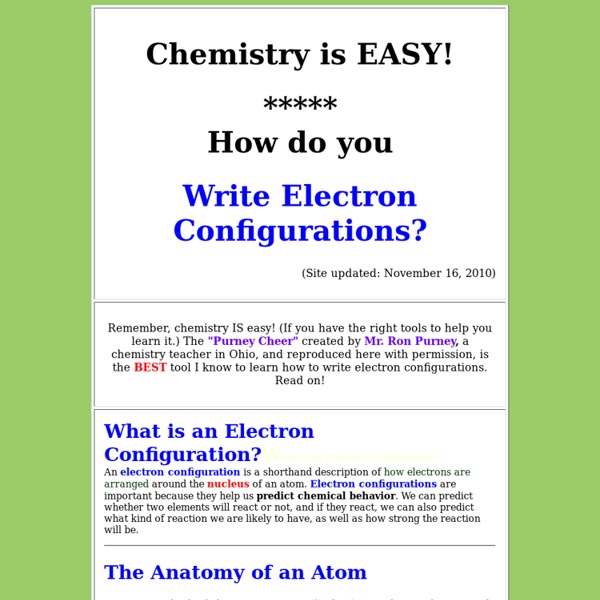 Electrons After reading this section you will be able to do the following: Describe the behavior of electrons in an atom. Explain how electrons allow atoms to gain or lose energy. So far, we have talked mainly about what is inside the nucleus of an atom. According to current theory, electrons are arranged in energy levels around the nucleus. The photon shown in the graphic can be considered a small bundle of energy (For more information on atoms, you may want to review the materials on magnetism.) Review: Electrons spin and rotate around the outside of the nucleus. Top 10 Mad Science-Worthy Chemistry Experiments Chemistry is a fascinating science, but it's often taught poorly in today's boring schools. Here's how chemistry should be taught: by mad scientists! Here's Neatorama's list of the Top 10 Mad Science-Worthy Chemistry Experiments: 1. Briggs-Rauscher Reaction [YouTube Clip] The Briggs-Rauscher reaction is a well known example of oscillating chemical reactions, also known as chemical clocks because the periodicity can be used to tell time. 2. Who'da thunk that Gummy Bear can be so ... violent? [YouTube Clip] 3. Mentos in various carbonated liquids. You've all seen this before. MythBusters explain: Whatever you do, don't eat a mentos then chug a mouthful of diet soda, mmkay? 4. [YouTube Clip] Yes, even elephants need to maintain good dental hygiene, but what kind of toothpaste do they use? This one's easy to do, all you need is dish soap, hydrogen peroxide, and potassium iodide: Link 5. What happens if you put a grape and nuke it in a microwave? [YouTube Clip] What just happened? Got that? 6. 7. 8.

Atoms: Neutrons Neutrons are the particles in an atom that have a neutral charge. They aren't positive like protons. They aren't negative like electrons. But don't start thinking that they aren't important. Every piece of an atom has huge importance to the way the atom acts and behaves. So, if an atom has equal numbers of electrons and protons, the charges cancel each other out and the atom has a neutral charge. You know that neutrons are found in the nucleus of an atom. Or search the sites for a specific topic. Matter: Chemical vs. Physical Changes It is important to understand the difference between chemical and physical changes. Some changes are obvious, but there are some basic ideas you should know. Physical changes are usually about states and physical states of states. Chemical changes happen on a molecular level when you have two or more molecules that interact. Chemical changes happen when atomic bonds are broken or created during chemical reactions. When you melt an ice cube (H2O), you have a physical change because you add energy. Chemical changes happen on a much smaller scale. Melting a sugar cube is a physical change because the substance is still sugar. Iron (Fe) rusts when it is exposed to oxygen gas in the air. Some chemical changes are extremely small and happen over a series of steps. The sugars glucose, galactose, and fructose all have six carbon atoms, twelve hydrogen atoms, and six oxygen atoms (C6H12O6). Or search the sites for a specific topic.

Subatomic Particles After reading this section you will be able to do the following: List the three main subatomic particles of an atom. Discuss the positions of these particles within the atom and what electric charge they carry, if any. What are atoms made of? Now that we have talked about how atoms are combined to make other substances, let's talk about the particles that make up the atom. Protons and Neutrons Protons and neutrons make up the nucleus of an atom. If all protons are identical and all neutrons are identical, then what makes the atoms of two different elements different from each other? Review: Subatomic particles are particles that are smaller than the atom.

Future - Chemonoia: the fear blinding our minds to real dangers If you were paranoid, you might think there really was something in the water that’s damaged our sense of reason. But since about the 1960s, a strange, pervasive fear has swept across the developed world – the illusion that there is a miasma of poison threatening to invade our bodies. It’s changed the food we eat, the air we breathe, the toys we give our children. Our bete noire? Chemonoia is the excessive fear of ‘chemicals’, based on emotion more than information Scientists have a name for this phobia – ‘chemonoia’. Although you could argue that “it’s better to be safe than sorry”, some experts argue that this fear of chemicals may have some unhealthy consequences. The origins of chemonoia can be traced to the 1960s, with mounting concerns about the use of pesticides such as DDT. We are primed to fear the artificial and prefer the natural. He points to evidence showing that humans are primed to fear the artificial and prefer the natural. What can be done?

Atoms: Structure Atoms are the foundation of chemistry. They are the basis for everything in the Universe. As you know, matter is composed of atoms. Solids are made of densely packed atoms while gases have atoms that are spread out. We're going to cover basics like atomic structure and bonding between atoms. Are there pieces of matter that are smaller than atoms? Even though many super-tiny atomic particles exist, you only need to remember the three basic parts of an atom: electrons, protons, and neutrons. There are almost 120 known elements in the periodic table. (117 as we write this) Chemists and physicists are trying to make new ones every day in their labs. You can see that each part of the atom is labeled with a "+", "-", or a "0." The electron always has a "-", or negative, charge. Since the number of protons in an atom does not change, fewer or extra electrons can create a special atom called an ion. Or search the sites for a specific topic.

Difference Between Isotopes and Elements Isotopes vs Elements Similar type of atoms can be changed slightly to form different isotopes. An element may have several isotopes. The nature of each isotope contributes to the nature of an element. Following is a broad explanation about elements and isotopes. Elements We are familiar with the word “element,” because we learn about them in the periodic table. Isotopes Atoms of the same element can be different. 1H – no neutrons, relative abundance is 99.985% 2H- one neutron, relative abundance is 0.015% 3H- two neutrons, relative abundance is 0% The number of neutrons a nucleus can hold differs from element to element. A mass spectrometer can be used to get information about isotopes. Related posts: