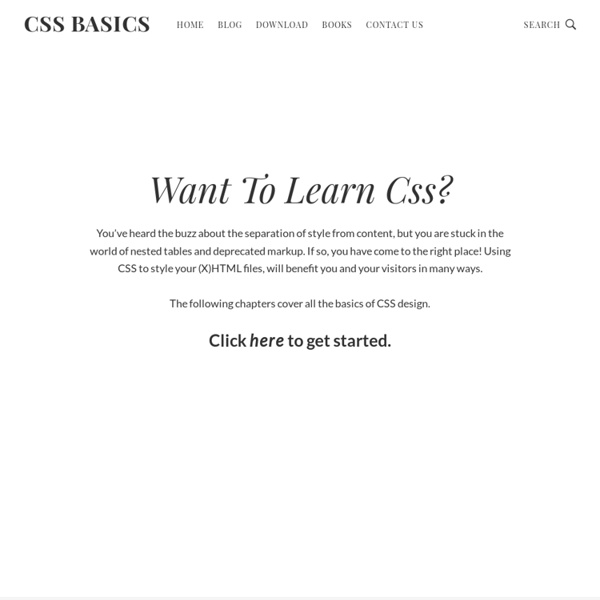 Using CSS Text-Shadow to Create Cool Text Effects The CSS3 text-shadow property has been around for some time now and is commonly used to recreate Photoshop’s Drop Shadow type shading to add subtle shadows which help add depth, dimension and to lift an element from the page. This isn’t all the text-shadow property is capable of though, by getting creative and playing around with the colours, offset and blurring we can create some clever and pretty cool text effects! Check out the six text effects of vintage/retro, inset, anaglyphic, fire and board game in the demo, then copy the code snippets below to use the effects in your own designs. Needless to say you’ll need a text-shadow supporting browser (Safari, Chrome, Firefox) to see them in all their glory. View the demo

Very Useful Free Video Guides and Tutorials for Beginners Who Want to Create a Web Site Even if you don’t know the first thing about where to start, here's how to create your own web site. There’s some great help for you in a series of free basic videos from Microsoft. They have been created especially for people who don’t know anything about HTML and CSS. The series is called “HTML5 & CSS3 Fundamentals: Development for Absolute Beginners” and is at the MSDN site called Channel 9 (link is here) There are 21 episodes that will teach you the fundamentals of HTML5 and CSS3. They can be downloaded individually for viewing on your own computer or smartphone and several formats are available.

A Preview of HTML 5 Abstract#section1 The web is constantly evolving. New and innovative websites are being created every day, pushing the boundaries of HTML in every direction. HTML 4 has been around for nearly a decade now, and publishers seeking new techniques to provide enhanced functionality are being held back by the constraints of the language and browsers. Article Continues Below Learn PHP - PHP Tutorial - Learn PHP Code PHP can be a powerful tool on your web site and learning it isn't as hard as you might think. Using our informative tutorials, even a beginner with no programming experience can start learning PHP and putting it to use right away. Learn PHP in 8 WeeksIn just a few minutes ever week, you can learn all the basics of PHP. This course is broken down into eight short lessons. In just eight weeks you will have a firm grasp of all the basic PHP concepts. How to use Arrays in PHPHow to setup and access an array and it's elements using PHP.

Reinventing a Drop Down with CSS and jQuery For me, standard HTML Select element is pretty much annoying. It's ugly. It can't be styled properly in Internet Explorer. And it can't contain nothing but simple text. Terminology, Syntax, & Introduction - A Beginner's Guide to HTML & CSS Before beginning our journey to learn HTML and CSS it is important to understand the differences between the two languages, their syntax, and some common terminology. As an overview, HTML is a hyper text markup language created to give content structure and meaning. CSS, also known as cascading style sheets, is a presentation language created to give content style and appearance. To put this into laymen terms, HTML determines the structure and meaning of content on a web page while CSS determines the style and appearance of this content. The two languages are independent of one another. CSS should not reside within an HTML document and vice versa.

Online Learning: A Bachelor's Level Computer Science Program Curriculum Introduction [Update: See also the follow-up post to this piece, An Intensive Bachelor's Level Computer Science Curriculum Program.] A few months back we took an in-depth look at MIT’s free online Introduction to Computer Science course, and laid out a self-study time table to complete the class within four months, along with a companion post providing learning benchmarks to chart your progress. In the present article, I'll step back and take a much more broad look at com-sci course offerings available for free on the internet, in order to answer a deceptively straightforward question: is it possible to complete the equivalent of a college bachelor’s degree in computer science through college and university courses that are freely available online? And if so, how does one do so? The former question is more difficult to answer than it may at first appear.

The Swift Programming Language: About Swift Swift is a new programming language for iOS and OS X apps that builds on the best of C and Objective-C, without the constraints of C compatibility. Swift adopts safe programming patterns and adds modern features to make programming easier, more flexible, and more fun. Swift’s clean slate, backed by the mature and much-loved Cocoa and Cocoa Touch frameworks, is an opportunity to reimagine how software development works. Swift has been years in the making. Apple laid the foundation for Swift by advancing our existing compiler, debugger, and framework infrastructure.

Free HTML Tutorial - Learning to Code HTML Home >> Building Your Website Customizable HTML / CSS Web Templates Download these HTML / CSS templates and learn how to edit them to fit your needs. 21 Excellent Dreamweaver Extensions for CSS Productivity and Standards-Speckyboy Design Magazine 21 Excellent Dreamweaver Extensions for CSS Productivity and W3C Standards. 15 of these extensions are freeware, the further 6 were that good I had to include them. They are worth the price. CSS Sculptor for Dreamweaver Description: CSS Sculptor helps you create the custom Web standards compliant, CSS-based layout you want and flatten the CSS learning curve. You can choose from any of the 41 included layouts.